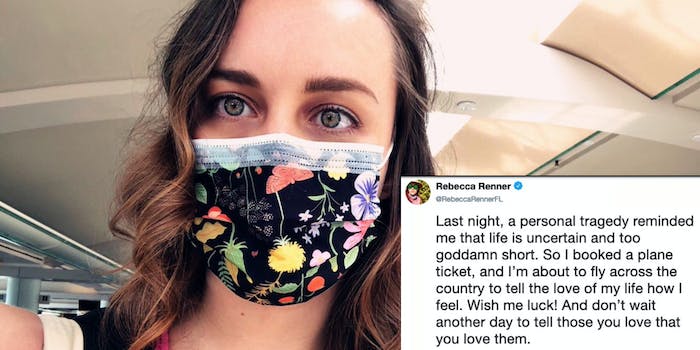 There are several basic tenets to your standard rom-com. You’ve got your average meet-cute that turns into a budding romance, followed by some misunderstanding or dramatic falling out that drives the two protagonists apart. And then, against all odds, one or both of the romantic leads sees an 11th-hour error in their ways and they reunite, ostensibly to live happily ever after.

It seems as though that’s what Florida-based National Geographic contributor Rebecca Renner was going for in a viral Twitter thread that unfortunately backfired in the most spectacular way. And people can’t stop talking about it.

It all started on Friday, May 21 when Renner posted an airport selfie in a since-deleted tweet. “Last night, a personal tragedy reminded me that life is uncertain and too goddamn short,” she wrote. “So I booked a plane ticket, and I’m about to fly across the country to tell the love of my life how I feel.”

Shortly after, Renner posted an update. “I’m not there yet,” she tweeted along with another selfie and view from the cabin window. “One more flight to go!”

By that point, her voyage had begun to attract more than a few eyeballs and the Twitter thread proceeded to go viral. People waited on bated breath for the conclusion of what would undoubtedly be a grand love story for the ages. Though Renner did not initially disclose what personal tragedy led her to the revelation—many people could identify. This past year has been a lot!

But unfortunately, it was not meant to be.

“Well, this is me in my shitty motel room after getting rejected,” Renner later updated with a disappointed motel room selfie. “I don’t know whether to be sad or angry, but I’ll live to love another day. Hopefully that love will be for someone who values it. Sorry to disappoint you, Twitter.”

“So now I’m stuck in Ashland, Oregon,” she added. “Any ideas on what to do here? (Anyone want to take me on an adventure?)”

Initially, the outpouring of sympathy was mostly positive. But the tides began to turn for Renner, who is the author of an upcoming book, Gator Country, when she opened up about her story to the New York Post. It also probably didn’t help that she outed her would-be lover by name.

“I asked him if we could try again and he said no,” she told the publication the following morning, just hours after being rejected. “So much worse has happened in life than somebody saying no to me. My heart is a little broken, but it will mend.”

However, by that point, people were no longer buying her story. “Jesus,” tweeted one user, alongside screenshots.

“Rebecca Renner claiming she didn’t mean for her thread to go viral, naming her ex in the same article then saying she was working on forgiving him has big Hannah Horvath/Lena Dunham energy,” blasted one user. “The narcissism is breathtaking.”

Others pointed out obvious holes in the account or made jokes at her expense. One even cited the Rebecca Renner story as a reason they still use Twitter in the first place.

Although Renner deleted most of her tweets about the saga, she did admit to the Post that the pair had breakfast to talk things over. She later tweeted that she was “taking a break” from the platform after making the mistake of tweeting through it.

“I’m okay,” she likewise responded to someone wishing her condolences. “This doesn’t even rank in the top ten of my life’s greatest heartaches.”