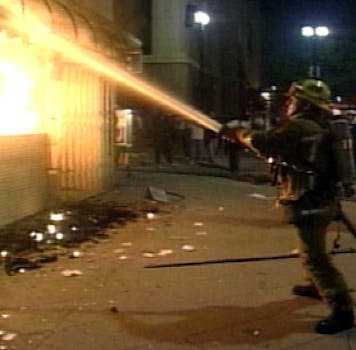 As part of a larger project: “L.A. Riots: 20 Years Later," NBC is using Twitter to relieve the chaotic riots in chilling detail.

Twenty years ago this week, Los Angeles was engulfed by anarchy.

April 26, 1992 marked the beginning of the L.A. riots, a period of unrest sparked by the acquittal of three white policemen caught on tape violently beating black motorist Rodney King.

Chaos ensued as widespread looting, arson, and even murder occurred, and local police deserted the city. But if frightened and injured civilians had Twitter news feeds to keep them informed and guide them to safety, maybe things would have been different.

This week, @RealTimeLARiots is offering a glimpse into how Twitter may have helped keep the public informed, had it existed at the time. Powered by NBC Los Angeles, the feed is part of a larger NBC project: “L.A. Riots: 20 Years Later.”

“Each @RealTimeLARiots tweet corresponds to the actual date and time (sometimes down to the minute) of each major event as it unfolded back in 1992,” wrote NBC reporter Olsen Ebright.

“‘We believe that the situation is now simmering down, pretty much under control.” Mayor#TomBradley,’” reads one such tweet.

Even 20 years later, the tweets are chilling, evoking the extreme violence and danger that L.A. citizens faced. The Twitter account may not have been able to assist the riots’ thousands of injured victims, but it ensures that we do not forget their suffering today.