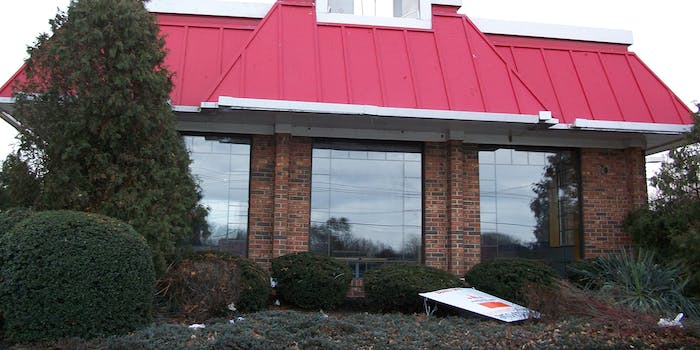 It’s a story that's all too familiar, and that's the problem.

It’s a story that is not at all unfamiliar: A disabled child goes to a fast food restaurant and is asked to leave by staff, who claim she’s disrupting the dining experience for other people. Danielle Duford and her family were asked to leave a Golden Corral because of their genetic skin condition. The same chain ejected Jeremiah Brenner because he had a vocal tic. Emma Duke’s orthopedic shoes offended diners at yet another restaurant.

People with disabilities frequently face discrimination in restaurants and other public locations, no matter what the Americans with Disabilities Act says. So when Victoria Wilcher’s grandmother posted on Facebook about a KFC location discriminating against her granddaughter, who had severe facial injuries from a dog attack, the response was immediate. People were outraged, and thousands of dollars started pouring into Victoria’s medical assistance fund. Community supporters volunteered to send angry letters to KFC. The restaurant chain issued a clear and unequivocal apology and pledged $30,000 to Victoria’s care.

It seemed, at first glance, like a classic case of the Internet doing good. Thanks to the rapid spread of information through social media, a simple case of everyday discrimination had become an international event that people were talking about. Victoria’s family, which was struggling to afford the costs associated with her injuries, was getting financial assistance, offers of free surgery, and a prosthetic eye, as well as attention they wouldn’t have otherwise received.

But then KFC started investigating. In two extremely thorough and separate investigations, the restaurant tried to find evidence that Victoria and her grandmother had been at one of their Jacksonville stores on the date in question, wanting to determine the location where the event had occurred. Surveillance cameras didn’t reveal the pair anywhere, despite careful scrutiny, and no sales records matched what Victoria’s grandmother had claimed the two had ordered.

Was the entire incident a hoax?

Victoria’s injuries are undoubtedly real, as police and animal control reports along with images from the hospital can prove, but the events reported by her grandmother nearly a month after their alleged occurrence were not. The family clung to the story, hotly denying claims that it was fabricated, but as the evidence mounted up and media sentiment turned against them, they quietly closed down the Facebook page dedicated to Victoria’s recovery and went into hiding.

It wouldn’t be the first time someone has been caught out in a medical hoax. Take Kaycee Nicole, a Kansas teen who died tragically of leukemia after documenting her life with cancer online—except that she never existed. Sonja Luker, Jessica Vega, Kody Grode, and many others faked cancer to receive funds, gifts, and support, later facing criminal charges for fraud. Sandy Nguyen tricked her own son into thinking he had cancer.

Notably, Victoria’s GoFundMe asking for financial assistance with the substantial costs of her recovery stood at only $600 in the days before her family publicized the KFC incident. As the news spread, donations poured in, and the total quickly climbed well over $100,000. Had her family taken a leaf from high profile cases, fraudulent and otherwise, and attempted to scam money from the public to help them pay for Victoria’s care?

Would that even be necessary in a nation with more comprehensive health care services? While the passage of Obamacare has been heralded by many progressives (including the President himself) as “universal health care,” it’s not. It doesn’t provide unilateral access to health services, but rather improved access to health insurance plans, and many people in the U.S. are still left out. Some states have refused Medicaid expansions, for example, locking low-income residents out of insurance. Mississippi, Victoria’s home state, is one of those which opted out of Medicaid expansion, hurting families just like hers.

Americans are still struggling with the costs of daily survival, and they’re still running fundraisers to try to pay for basic medical expenses. Last month, Eden Alexander was in the headlines for her medical fundraiser, which went pear-shaped after it was closed down because she’s a sex worker. Twitter and other social media abound with pleas for fundraisers to help people afford expenses associated with catastrophic accidents, chronic illnesses, cancers, and more. The existence of such appeals makes it easier for fraudsters to slip in, taking advantage of kind-hearted friends and strangers.

In Victoria’s case, the funds were likely sorely needed, as were the other assistance offers made. When trying to fundraise on their own didn’t work, perhaps the family got frustrated and thought that faking discrimination might be an effective way to get eyes on the cause. Assistance funds designed for situations like these often provide only limited funding, and are slow to process claims, making it difficult for families who need help urgently. The family could have felt trapped and at the end of their options, making this an appealing choice for addressing the high costs of Victoria’s recovery. Their tactic almost worked, but for the diligence of KFC and the media, who are now wary of hoaxes when they encounter stories like these.

The family will likely face a suit for fraud over the hoax, but KFC has, astoundingly, stood by its pledge. The company will donate $30,000 to Victoria’s care even though her family apparently never set foot in a Jacksonville store, and certainly wasn’t asked to leave.

Victoria’s family may not even get to keep the funds they scammed, as repayment of the funds may become part of a legal settlement. Meanwhile, for people who actually experience discrimination in public accommodations, cases like this make it that much harder to access compensation. Every time frauds like this one occur, they plant seeds of doubt in the minds of the public.