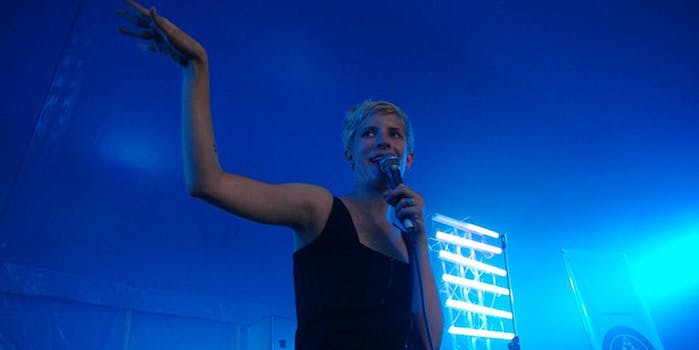 When you’re an Indie band out of Portland, Oregon, and you need to find a fresh, unique way to promote yourself and your music, what do you do?

If you’re YACHT, the musical duo of Jona Bechtolt and Claire L. Evans, you decide that the way to go is to pretend a sex tape you made for your private enjoyment has been stolen and released without your consent. After all, it seemed to work out so well for Paris Hilton and Kim Kardashian.

Earlier this week, YACHT posted to their social media platforms that a private home sex tape was released without their consent. In order to get ahead of it, and to maintain some semblance of control, the duo said they would offer the video on their own site for a $5 download. When I first heard about what happened, I was initially aghast.

Something immediately felt off.

Revenge porn—the concept of sharing sexual images or videos without someone’s consent—is a real problem, and I was frustrated over seeing yet another case of this happening. But the more I started to read up on what happened and the way YACHT was responding, something immediately felt off.

I didn’t have to wonder too long. Not even a day later, the band revealed that— ha ha ha!—it was just a little, harmless hoax created to help with the band’s promotion. But here’s the reality: Neither Bechtolt nor Evans were ever actually the victims they portrayed themselves to be. There was no sex tape. It was never stolen and posted without their consent. Their “woe is us” post was completely fabricated.

But you know what isn’t made up? The many instances where something this horrific and violating actually happens, at times with devastating consequences.

I also think of Canadian teen Rehtaeh Parsons who ultimately committed suicide after she was assaulted and then harassed online. I think about Audrie Potts who was sexually assaulted, had images of that assault posted on social media, and then later died of suicide. I think of the young teen at the center of the Steubenville case who had her sexual assault splashed across social media as well.

Thankfully, the Internet is good for some things. It’s no shock that as soon as this was all revealed to be a stunt, YACHT got quite the pushback. Even their PR firm, Motormouthmedia, made it explicitly clear that they were not involved in this:

It's time to state this.
We are not involved in the Yacht situation in any way the idea was devised and executed 100% without us.

The band initially offered up a pretty defensive, crappy non-apology and then today posted a lengthy apology on their Facebook page. Tucked into this second apology, they included a link to the “sex tape,” which is actually their new music video. Even within their apology—where they acknowledged what a piss-poor decision it was to pretend a video had leaked without their consent—they still tried to promote their video. Clearly, despite their mea culpas, the lesson wasn’t learned.

The comments on YACHT’s page are a mixed bag. Lots of folks are calling them out, while others are standing by their favorite band. But this isn’t about solidarity or feeling like we were “tricked.” It’s about using something that actually happens and actually destroys people’s lives to market yourself and profit. That is not OK.

It diminishes the validity of those who are actually dealing with this stuff in their lives.

It’s also harmful because it adds another drop into the bucket of those who feel that the threats are false or that revenge porn is really “no big deal.” Anytime someone lobs a fake accusation like this, it diminishes the validity of those who are actually dealing with this stuff in their lives. Obviously it shouldn’t have any impact, but it still does because people can use this as their champion. “Well, actually, don’t you remember when YACHT fakes that leaked sex tape? I bet that girl just leaked the tape for attention!” YACHT isn’t helping anyone here but themselves, and in fact they’re creating more harm than anything else.

Next time a band needs to come up with a promotional gimmick, let’s hope they steer clear of anything to do with pretending to be a victim and blurring the issue of consent.

Avital Norman Nathman is a freelance writer whose work places a feminist lens on a variety of topics, including maternal health, reproductive rights, gender, parenting, and pop culture. Her first book, The Good Mother Myth: Redefining Motherhood To Fit Reality, came out in 2014 from Seal Press. She’s currently working on her second book, looking at the idea of perfection within the U.S. birth industry. Follow her on Twitter @TheMamafesto.