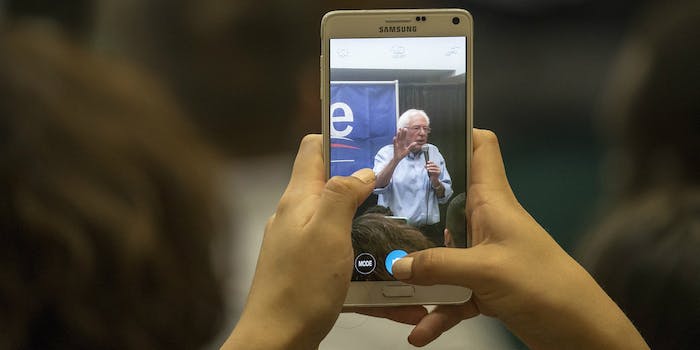 Here’s the true winner in the Iowa caucuses.

Regardless of which candidates triumph in the Iowa caucuses today, there is one winner whose victory no one will be able to dispute—digital technology.

To understand how the Internet has fundamentally transformed the Iowa caucuses, it is first necessary to explain the mechanics that determine how this unique political ritual functions. Although primaries are ordinary elections held among voters within the same party, caucuses are outright gatherings in which party members discuss everything from candidate preferences (for local as well as national offices) to their stances on various issues.

This is where digital technology comes into play in three critical ways: Helping campaigns monitor results in real-time and strategize accordingly, avoiding potential embarrassment in reporting the eventual results, and stimulating voter turnout.

We can start with Twitter, which will allow each campaign to determine how its candidate is performing in districts across the state. “Our voting calculations in our own heads change depending on which candidates are doing well,” explained Rebecca Paine Caufield, a professor of political science at Drake University in Des Moines, in a piece for Wired. “We’re going to have a lot more information about that this time around.” This assessment was confirmed by Twitter’s head of news, Adam Sharp, who observed that “fair weather supporters of the candidates, hoping their neighbors speak for them, will now have more visibility to see and understand how critical their vote is when they are getting those real time reports.”

This is the area in which the difference between the Republican and Democratic caucus procedures makes the most difference. Unlike Republicans, who cast a secret ballot, Democratic voters have to meet in a room, divide into sections for each candidate, and then spend half an hour trying to convince each other to switch sides. Because each group must have a minimum number of participants to be considered viable, those who fail to meet that standard after 30 minutes must realign until the final count takes place. Needless to say, this makes accurate information about which candidates are winning very important for the Democratic contenders, especially considering that most recent polls show Hillary Clinton and Bernie Sanders in a very close race.

Not surprisingly, Big Tech has noticed the demand for fast and accurate reporting of voting results and is willing to take advantage of it. Microsoft has developed a pair of apps to report vote tallies in the nearly 1,700 precincts throughout the state, allowing precinct captains throughout the state to not only keep track of their candidates’ progress but have reliable final returns after all of the votes have been counted.

This is particularly necessary after the Republican Party was embarrassed during last year’s Iowa caucuses, when Rick Santorum eeked out a slight victory over Mitt Romney but Romney was wrongly declared the winner due to faulty initial reporting. By offering their services for free to both parties, Microsoft is hoping to set a precedent that will prevent incidents like that from happening again. As Iowa State University professor Mack Shelley pointed out to The Hill, “it will be interesting to see what happens if and when there are discrepancies between the Microsoft system and either Democratic or Republican campaign tabulations.”

Perhaps the most important use of technology, though, will be in stimulating the lifeblood of any successful campaign—voter turnout.

Perhaps the most important use of technology, though, will be in stimulating the lifeblood of any successful campaign—voter turnout.

On the Democratic side, Sanders has the distinct advantage of primarily drawing support from voters who are less likely to turnout on Election Day, leading Clinton 56 to 41 percent among Democrats who have never caucused before. As a result, Sanders’ campaign is going to utilize the wide gamut of technological resources that have helped fuel his campaign from its inception, only this time with the goal of reminding his supporters of their responsibility to actually show up for the caucuses. Similarly, because 39 percent of likely Republican caucus-goers who haven’t turned out in the past support Donald Trump, his success in Iowa will also depend on whether he can be as savvy as opponents like Ted Cruz, who has built a tech savvy grassroots operations in Iowa that Matthew Boyle of Breitbart described as “something to behold,” allowing him to carefully coordinate over 1,000 precinct chairs and 5,000 volunteers all across the state.

When all is said and done, though, there is only one truly important takeaway regarding all of this technological development: It is only as influential as voters allow it to be.

Although political history tells us that Election Day voters are likely to gravitate toward candidates who they perceive as winning, it is ultimately the human reaction to that news that makes this trend possible—the technology is merely a tool for facilitating it.

When all is said and done, though, there is only one truly important takeaway regarding all of this technological development: It is only as influential as voters allow it to be.

More significantly, although technology has empowered the presidential campaigns of candidates like Bernie Sanders on the left and Ted Cruz on the right, those phenomena are only as meaningful as the actual votes that each man tabulates as a result of them. If Sanders’ impressive technological operation isn’t able to translate into actual votes among Iowans traditionally inclined to not turnout, it will have been to no avail. Likewise, if Cruz’s impressive digital organization in Iowa fails to effectively mobilize its members into the voting booths, it may get overwhelmed by the Trump leviathan.

This is the beauty, and responsibility, of living in a technologically advanced democracy. No matter how proficient we may be at developing and utilizing new tools for organizing support, it is the individual voter who chooses to go to the polls that ultimately determines the outcomes of elections and the fates of nations.

It is a wonderful thing that, even in an era blessed with technology that would have seemed impossibly futuristic only a few decades ago, the importance of the human element has yet to be entirely diminished. At the same time, if human beings don’t rise to the challenge of fulfilling their age-old civic duties, our high-tech voting apparatus will only be so much sound and fury, signifying nothing.