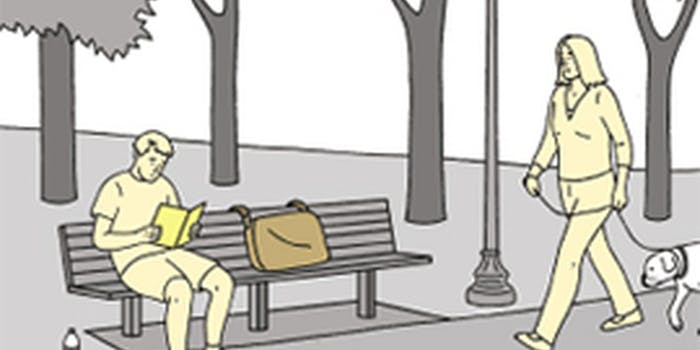 Today is International Read Comics in Public Day, a day when hundreds of comics fans will take their favorite books out into the world and then post the evidence online. Though only in its third year, the movement has already spawned offshoots including Women Read Comics In Public and Men Read Women in Comics (presumably also in public.)

Creators Brian Heater and Sarah Morean, who write for comics website The Daily Cross Hatch, had the idea two years ago. Posting about the upcoming event on August 15, they wrote:

Held in honor of Jack Kirby, legendary creator of Marvel characters Captain America, The Hulk, and many more, the holiday aims to promote the joy of reading and a display of comic fan pride everywhere.

Californian comics fan Rebecca told the Daily Dot she’s reading with a friend later on today. “She’s bringing [Scott] McCloud’s Understanding Comics and I’m probably bringing Spider-Men. Or Ultimate Spider-Man.” She said that for her, Read Comics Day is all about visibility, and that she would be submitting her own pictures to the Women Reading Comics Tumblr:

Australian comics fan Kiyala told the Dot that because she and her friends are unable to participate in the event today, they’re holding an event of their own on Sunday. “I think it’s important to get it out there, that comics can be enjoyed by anyone, of any age,” she told the Daily Dot.

“Some people (my parents for example) see it as something childish, when a lot of the content in comics is really NOT suitable for kids. I honestly think it’s just like any other book. If it gets more people willing to give comics a go, then it’s great.”

Don’t know anything about comics? Don’t know where to start? Here are five comics you can read in public today.