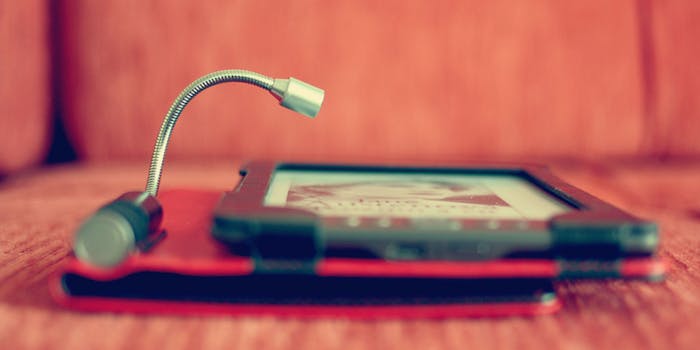 The reactionary politics behind the ebook witch-hunt

Don't burn ebooks at the stake just yet.

Nothing frosts my cookies more than the effete argument that ebooks will wipe print books off the face off the earth. It’s the Upper East Side sort of diatribe we witness from Sadie Stein in The Paris Review that goes like this:

Over the weekend, someone asked me how I’d argue for the survival of the print book. I was taken aback; it felt like being asked to defend food against Soylent Green or sex against the exclusive domain of artificial insemination.

Stein is speaking to the survival of the print book as if it were an endangered species such as the Short-Tailed Albatross, once native to the great state of Oregon. Those behind the evolution of e-ink screens, digital typography, and ebooks are not poachers; they are pioneers attempting to broaden the reach of the printed word (so to speak) and become a force behind the words often attributed to William Gibson: “The future is already here; it’s just not evenly distributed yet.

The debate between the relative merit and possible future demise of print books versus their electronic counterpart makes for jolly online debate and perhaps semi-sloshed happy hour verbal jousts. It is, however, a pointless narrative and infers the need for a zero-sum game. The truth is, we’re asking the wrong question in this he-said, she-said exercise.

The focus should be on how do we take a double-barreled approach to increasing literacy, home and abroad, and deliver whatever flavor of reading suits the individual and his or her particular use case. This is the ultimate case of the rising tide lifting our desire to read no matter what the medium—paper, ebook or anything inbetween.

In 2007, I purchased my first Amazon Kindle partially out of curiosity and somewhat out of necessity (I was a technology analyst), and I felt a part of me, the once-voracious reader, come alive. After a long period of excuses centered on the theme of being too busy, I again began reading. I began reading everything—electronic and print. Through recommendations—some delivered by Amazon, some by such sites as Goodreads—I discovered new authors and new genres; I found myself wandering the aisles of the few remaining bookstores (most notably Powells on a trip to Portland) in search of print versions of older titles from authors sent my way via the mysterious magic of the “if you like this, then you will like that” algorithm.

The symbiotic relationship between ebooks and print books is backed by some important data. The Pew Research Internet Project discovered that 89 percent of ebook readers also read a print book in the last 12 months. While the vast majority of those who read ebooks read them on a dedicated device (i.e. Kindle, Nook), a large number also read ebooks on their tablets and—for those whose vision far better than mine—smartphones. The numbers alone should assuage the fear of those who worry their coffee tables will go naked in years to come if elegant editions of oversized images of some foreign skyline come to an end.

On the other hand, there is a strong case to be made that ebooks should have the backing of all humans who care about creative expression, equal educational opportunities, and advancing global literacy. At issue is that there are those with access to the megaphone of absurdity, making bold statements that bring forth the idiotic belief that those who read ebooks are not serious readers. Novelist Jonathan Franzen, speaking at The New Yorker Festival event in Cartagena a few years back slung some heavy duty mud at the growing group of readers who enjoyed their content digitized.

“I think, for serious readers, a sense of permanence has always been part of the experience. Everything else in your life is fluid, but here is this text that doesn’t change,” Franzen said.

Were Franzen and others who view ebooks as disruptive in the worst connotation of the word to take their heads out of their keisters, they might consider these points:

Ebooks have created greater democratization in the creation and distribution of new literature and event scholarly thinking. Without having to go through the iron gates of major publishers, new authors have emerged who have access to an unprecedented number of digital self-publishing platforms. A double-digit growth in self-publishing combined with such distribution platform as Smashwords changes the book industry’s once-constricted laws of supply and demand.

In an upcoming issue of The Kernel, the Daily Dot’s new Sunday magazine, we look at the challenges facing the implementation of such devices as tablets in the K-12 classroom with the belief many projects to date have failed because those implementing educational technology failed to plan, using the read-fire-aim method of deployment. What is undeniable, however, is the promise ereaders, tablets, and other similar devices in create powerful educational experiences which allow each child to create his or her own learning trajectory. An ereader in the hands of a young learner can include such enhancements as a built-in dictionary and other learning aids.

As ebooks become an important part of our lives—for education, entertainment, or just killing time—I find myself spending an increasing amount of time defending the advancement of a somewhat new technology as if I were supporting book banning or book burning or suggesting we tear down the walls of the public library. What strikes me odd is how personal and emotional ebook critics have become over what they fear is the end of reading—or at least, as they knew it. New York Times columnist Charles M. Blow waxes rhapsodic over the how books changed his life and argues that ebooks can’t whisper those romantic nothings in the ears of today’s youth:

I understand that we are now inundated with information, and people’s reading habits have become fragmented to some degree by bite-size nuggets of text messages and social media, and that takes up much of the time that could otherwise be devoted to long-form reading. I get it. And I don’t take a troglodytic view of social media. I participate and enjoy it.

But reading texts is not the same as reading a text.

There is no intellectual equivalent to allowing oneself the time and space to get lost in another person’s mind, because in so doing we find ourselves.

And that takes us full circle—from Ms. Stein’s being “taken aback” to Mr. Blow getting lost in another person’s mind. Truly romantic notions that only obfuscate the point that ebooks extend the power of literacy to underserved audiences, encourage a new generation of writers to put pen to ink and allow students to learn at their own pace. I do not know of a single person who is behind the proliferation of ebooks who wants its growth to come at the expense of its printed brother.

I could tell those whose snobbery distracts them from seeing that ebooks represent progress, but I’ll let a snarky pundit who calls himself (or herself) the Copy Curmudgeon say it for me:

The book did not spring from the hand of god in the form that was most common when you were a child; it has been evolving for centuries. Nor is the book disappearing—paper books still make up 85 percent of the market, despite a huge surge in the number of ebooks sold in the last few years. So the next time you’re considering boring an audience with a 3,000-word rhapsody to the sensation of an overladen bookstore bag bumping against your knee, please consider instead merely repeating ‘I hate change’ for as long as it takes to fill up the space.