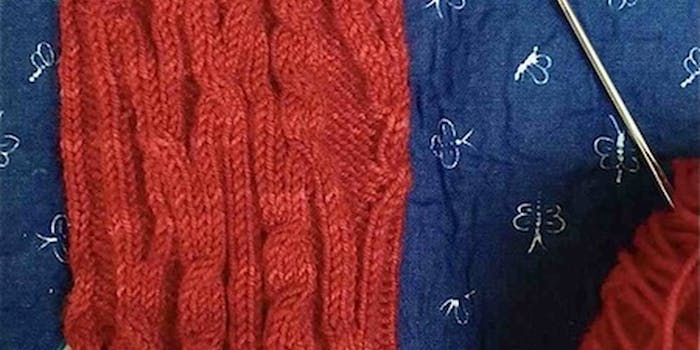 The online knitting community thinks Colbert is just the person to cover the controversy over their Ravelympics event, and they're offering him a lifetime supply of handknit socks to do it.

The U.S. Olympic Committee has already apologized twice for telling knitting social network Ravelry that its knitting-themed competition was “disrespectful” to Olympic athletes.

But community members are still holding a grudge. And now they want to get Stephen Colbert involved.

Socks for Stephen is a new Ravelry group dedicated to “bribing” Colbert with a lifetime supply of handknit socks in exchange for covering the controversy on The Colbert Report.

The initiative is headed by Ann Shayne and Kay Gardiner of Mason-Dixon Knitting, two bloggers (and knitting book authors) who were especially riled up by the USOC’s implication that knitting was an un-American practice. Gardiner wrote:

“The whole thing reminded me of one of Stephen Colbert’s ‘PEOPLE WHO ARE DESTROYING AMERICA’ segments. You know, where he exposes the deep damage done to the social fabric and the Values We Hold Dear that is being done by, say, a lady who wants to air-dry her laundry to save energy, in a community that has a strict rule against clotheslines.”

“Stephen Colbert needs to expose this travesty! He needs to protect the pure and noble Olympics from tarnishment by association with millions of handknitters watching the games this summer.”

In response to Gardiner’s plea, hundreds of knitters began tweeting @StephenAtHome using the hashtag #sox4colbert. Knitters are also rapidly churning out size 11 socks in the Colbert pattern, which Shayne and Gardiner designed and named for Colbert himself. The dedicated Ravelry group has 500 members and counting.

“My socks are headed to Stephen today,” JudithBrodnicki wrote in the group.

Shayne and Gardiner have yet to hear from Colbert, but remain optimistic.

“People have asked me whether we’ve heard from Stephen Colbert,” Gardiner wrote. “The answer is: not directly, we have good reason to believe that he’s been told about the story, and told about the lifetime socks offer. Since it’s such a good story, we’re still hopeful.”

The Daily Dot has been unable to reach the knitters so far, but will be following the story to see if Colbert reacts.