A rare scrap of New Testament papyrus might sell on eBay

A Bible scholar is trying to convince the seller to donate it to a museum.

What do you do when a priceless scrap of ancient Greek papyrus flutters out of your dead relative’s letter collection when you’re going through his things?

Sell it on eBay, of course.

That’s what nearly happened to a tiny snippet of the New Testament written in Greek, a rare fragment of papyrus that once belonged to a Christianity professor at the University of Chicago.

Luckily, another Biblical scholar, Dr. Geoffrey Smith of the University of Texas, happened to spot the eBay auction for a “Rare Papyrus Fragment Greek John 1,” starting at the low, low price of $99. 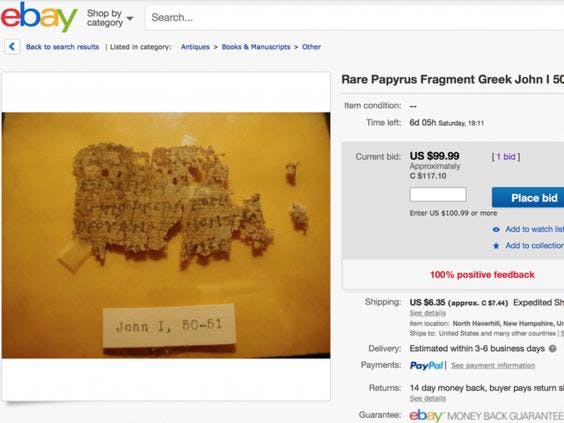 Smith and a horde of antiquities collectors all contacted the anonymous seller. The collectors promptly began offering increasingly exorbitant prices for the rare fragment. Smith, however, argued that the small rectangle of parchment deserved to be given over to the public for scientific study instead. As a result, the seller let him have a look at the goods.

The papyrus is one of only 130 known authentic examples of Greek New Testament writing on actual papyrus scrolls. At the time the Greeks were transcribing the New Testament, most of them were switching from papyrus scrolls to a rudimentary system of books called the codex. Because papyrus was rapidly becoming obscure technology, a sample of the book of John 1 written on papyrus is a rarity.

Another thing that makes this papyrus unique is that the scripture is written on the front of the scroll instead of the back, meaning that the scroll itself was unused at the time of the writing. No other scroll with an unused side is known to exist.

The glass-encased scrap of history sat untouched in a suitcase for 25 years after the seller acquired a suitcase belonging to Harold Willoughby, a University of Chicago Professor of Christianity who died in 1962. When the seller finally opened the suitcase to look through Willoughby’s possessions, the treasure “literally fell out of a stack of letters,” according to the original eBay listing.

Smith first encountered the papyrus in January, when it went on sale, and he got an up-close look at it in March. Last weekend, he presented the results of his study of the document at a conference on Biblical literature, to the wonderment of scholars everywhere.

Surprisingly, it’s not unusual for rare, antique writings to appear on eBay, prompting questions about whether the documents are authentic, where they came from, and who has provenance over them.

The papyrus of John 1 still sits in Willoughby’s relative’s private care—though Smith continues to urge him to donate it to the public once and for all.

Photo via Ryk Neethling/Flickr (CC BY 2.0)