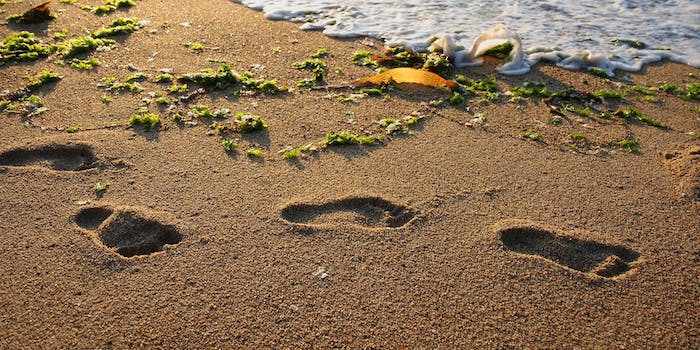 I didn't even notice who he was—until I saw his message.

I have a bad habit of accepting Facebook requests without checking to see who the person is. This means that I am friends with a high volume of spam prostitutes and people who send me Candy Crush invites. It also means that when the guy who tried to rape me invited me to be his friend on Facebook almost two years later, I didn’t even notice—until he sent me a message.

When I saw it sitting in my inbox, I froze, just like I always do in these situations. I’ve been sexually assaulted enough times to know I have specific rape tendencies. I forget to breathe until I start crying. Not a full-on sob, like a grieving Sicilian woman throwing herself onto a coffin, but a slow leak, as if something inside were quietly trying to escape without being noticed.

When I’m sexually assaulted, I don’t move. I go catatonic like a possum or a fainting goat, but one that has to stay awake.

This meant that the first time I was assaulted, I had my eyes open the whole time, pinned to the image of him like a car crash.

The second time a different guy was behind me in a bar and pulled me close, pinning me to him. But he didn’t have to. At the time, I was just strangely grateful that I didn’t have to watch his eyes.

But the third time I kicked the guy before he could, a reflex I didn’t know I had. I watched him fall onto the ground, not able to process what just happened, and I couldn’t help but smile a little as he struggled to stand. It was better than feeling blank. 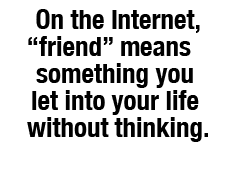 I never saw him after that night, when we both crashed on a cold couch at a friend’s party waiting for a taxi that never came. There weren’t a lot of places to sleep and the party attendees had to make do. I didn’t realize that resting next to him meant that he would be breathing into my mouth at three in the morning, while he assumed the shivering person next to him was asleep.

I used to wonder what about me made me “rape-able,” if I have an invisible sign that marks me. I know that’s the rape culture talking, but your mind can’t help but go to some pretty dark places. Sometimes the dark places are all you have.

After a friend of mine was assaulted, she used to fantasize about her rapist, dreaming that he was a minotaur or a Zeus-like god, her way to cope with what happened. She wanted a version in which what they had was beautiful. In my case, I just wanted him gone, and in the two years since, I had all but forgotten about it. It seems like the type of thing you would remember, but I’ve never been good at journaling, let alone starting a mental rape diary.

But then I saw his message sitting there, as simply as if he were catching up with an old friend. I looked at his easy words—“how are you?” he wrote, without even bothering to capitalize—and I hadn’t the slightest clue what etiquette was in this case. Emily Post never covered “Responding to Your Thwarted Sexual Assailant.”

Part of me wanted to be polite to him or to pretend as if nothing had happened. I wanted to tell him how wonderful and perfect my life was since the night we last met, as if I were a laughing man in a stock photo. I would throw up my hands and laugh until I started to cry. They never show you what perfection looks like when the camera’s turned off.

But mostly I was just happy he didn’t “poke” me. When I was a freshman, a poke was code for wanting sex, but it’s since evolved (when people remember to use it) as a way to just affirm your existence. When you’re poked, you are real. You matter. And unfortunately, Facebook had yet to install a feature that would allow you to do the opposite—like scream in someone’s face. There was no “spit” button. On Facebook, you can only ever like things or ignore them.

I wanted to block him. I meant to block him. I told myself I would block him. But I was too afraid to move, like he’d see me if I did. It didn’t matter that he knew I had read his message and hadn’t responded. He could see me wriggling, but I had to remember how to kick. 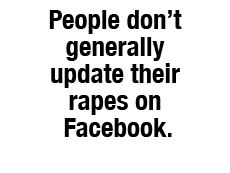 I stayed Facebook friends with my first rapist for years afterward. I needed to stay connected to him in ways I couldn’t explain, as if I were watching him, waiting for it to happen again. I don’t know what I was expecting to see. People don’t generally update their rapes on Facebook, and all I ever got were photos of him at parties or visiting family, a reminder of how perfectly banal the rest of his life is. You could never tell just by looking at him, but I thought if I looked hard enough, I would be able see what others couldn’t.

My therapist would say that this was a way of reliving my trauma. I would say I just wanted my rapist to make sense to me. I wanted to be Nancy Drew Facebook Detective, using to restore order and justice to the world, but I just became addicted to the mystery. I found myself looking through all of his photos, as he hung on people who looked like they could be friends. On the Internet, “friend” loses all meaning, like a word you repeat until it becomes a junkyard of letters. Friend means something you let into your life without thinking.

Back then, I didn’t block my rapist all at once. Slowly I didn’t need him anymore or the daily reminder of that pain, like a shoe that rubs your ankle raw. You learn to live with it. You learn to expect it. You might, on some days, even touch the scar and think you deserve it. It’s like learning to walk again, but this time I knew I couldn’t wait to take that first step.

1) I asked my roommate to block him.

2) I told my roommate who he was, so I didn’t sound crazy.

3) I told my roommate I would let her know when I was ready.

5) I read of all of his Facebook statuses from the past year.

7) I cried, but not the leaking kind this time.

8) I decided to just do it myself.

9) I texted my mother, just because.

I didn’t need to see him fall to know that I was.