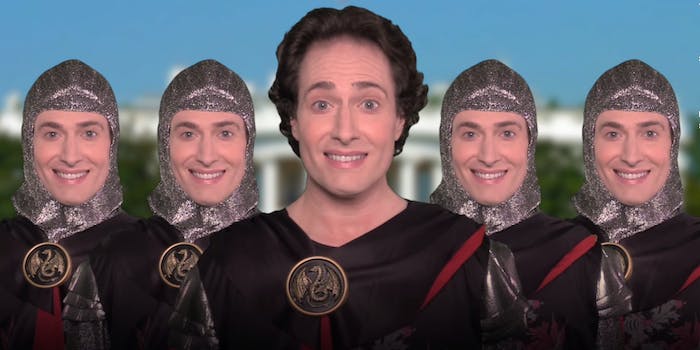 Randy Rainbow, a comedian who’s made a name for himself through humorous songs uploaded to YouTube, is under fire for racist and transphobic tweets dating back to 2010. He’d recently released a viral song about Sen. Kamala Harris (D-Calif.).

The issue of old problematic content has come for quite a few public figures over the last several years. A number of comedians, celebrities, and YouTubers have been completely undone by the resurfacing of past mistakes. In Rainbow’s case, his tweets were primarily targeted for their use of outdated language and labels regarding the Black and trans community, among others.

While Rainbow left many of these bigoted tweets far behind, the past caught up to him Monday afternoon. His nearly 10-year-old tweets were first resurfaced by Twitter user @spookperson, who highlighted several years of tweets using language that is considered hate speech by some social networking giants. In a series of tweets that spanned nearly a year, Rainbow repeatedly used the term “tranny” in attempts to be comedic.

The term “tranny” is an outdated, derogatory word that often leads to confusion among the general populace. In the past, the word has been used as a catch-all for people who fall into several separate categories. The word was often used to describe transvestites, or people who enjoy dressing in clothes typically worn by the opposite gender, as well as transgender people, or those whose gender identity differs from their assigned gender at birth.

In a number of tweets highlighted by @spookperson, Rainbow repeatedly attempted to use the term for comedic purposes. “That awkward moment when you yell ‘What up tranny?!’ to Leah Remini as she passes you on the street and it turns out to be an actual tranny,” one of the tweets reads.

Soon after the first round of tweets resurfaced, more followed. Round two consisted of several racist comments, primarily targeting the Black community. He even pokes fun at segregation in one. It’s… not a good look.

Rainbow’s fans and followers were soon caught in the middle. Most found the old tweets deplorable, and are fully prepared to cancel the YouTuber over his past transgressions. Some of Rainbow’s fans are standing by him, however, pointing out that standards were different in 2010.

Other old posts mock Asian people, Hispanic people, and even sexual assault. Rainbow has yet to respond to the resurfaced tweets or a request for comment from the Daily Dot.