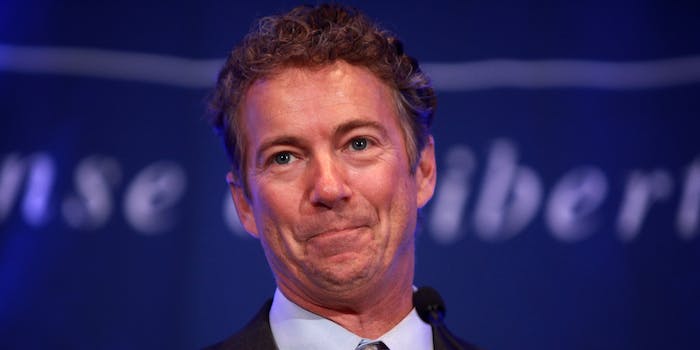 In his bid to be the Republican nominee ready to face Hillary Clinton in 2016, Kentucky Senator Rand Paul has certainly seemed to make all the right moves of a 21st century candidate. He’s very active on Twitter and Facebook, good friends with tech-savvy colleagues like New Jersey Senator Cory Booker, and he regularly tries to court the favor of Silicon Valley demigods like Peter Thiel and Mark Zuckerberg. Although he’s had mixed results with the service, Paul is even the first United States senator on Snapchat. While these might seem like obvious maneuvers if one hopes to gain popularity in the digital age, the tactics put Paul streets ahead of his Republican colleagues—and arguably Clinton herself.

Far from being the techie’s dream candidate, however, Paul represents an odd dichotomy for both consumers and the industry that makes the products we love. He has earned much-deserved praise for his position against mass surveillance by the National Security Agency, stating in his candidacy announcement: “I will not compromise your liberty for your security. Not now, not ever.” And while that fits in with his libertarian roots, so does his position against net neutrality, which requires government regulation of Internet Service Providers to ensure fairness and openness of the Internet.

The combination of these two stances, while consistent with Paul’s ideology, present an interesting opportunity for voters and Bay Area donors to choose between these two top priorities. Privacy debates have become a major concern since Edward Snowden leaked documents proving the existence of the NSA’s spying programs almost two years ago, with firms like Google and Apple working overtime to show consumers the sharing of information was far from a complicit partnership with the federal government.

“We can put out any statement or statistics,” one Facebook executive told Wired, “but in the wake of what feels like weekly disclosures of other government activity, the question is, will anyone believe us?” Since then, abolishing the surveillance programs—or simply preventing any snooping through new encryption standards—has become the mission of every top company in Silicon Valley. Paul is likely the only 2016 candidate who will take such a strong stance against the NSA’s program, making him quite appealing to the bevy of wealthy donors the tech sector has grown.

However, those same companies spent millions of dollars lobbying in favor of regulating ISPs under Title II, preventing companies like Comcast and Verizon from restricting their access to consumers through throttling. Google, in particular, has been immensely active in Washington on this issue and has had over 200 meetings with President Barack Obama since he took office. Through his stance against net neutrality, Rand Paul is asking these companies to efforts, hard work that paid off in February, when the Federal Communications Commission voted in favor of net neutrality.

This is the likely reason Paul hasn’t exactly been a proud warrior against net neutrality: Although he introduced a bill in 2011 to repeal federal regulation of ISPs, he’s rarely discussed the issue in public and issued no statement after the FCC’s ruling. While he told the Huffington Post, “I don’t want to see regulation of the Internet” last December, he quickly pivoted to breaking up the monopoly of ISPs and cable companies, squarely blaming “government privilege” for creating said monopolies. And while breaking up the ISP market would certainly produce faster, more reliable Internet for American consumers, blaming government regulation for the state of the ISP market is a bit like blaming medicine for making you sick.

And it makes complete sense why Paul would be sheepish about his stance on net neutrality. The regulations are absurdly popular with voters, netting an 83 percent favorability rating even with the conservatives Paul desperately needs to win primaries. If he’s to win, Rand Paul needs to separate himself from the far-right Christian conservatives of his party, yet it’s Ted Cruz—the Tea Party favorite to end all Tea Party favorites—who most famously summarized the GOP stance on net neutrality by calling it “Obamacare for the Internet.” If Paul hopes to lean towards the younger, more educated end of the Republican party, he needs to differentiate himself from folks like Cruz.

Paul is also quite desperate to win approval of Silicon Valley donors. Having spent much of his career railing against “fat cats, Wall Street, and rich people,” Paul has largely squandered any good will he might have had in those sectors—and must look elsewhere for campaign funding. To cozy up to the tech sector, Rand Paul has attended numerous high-profile fundraisers in and around San Francisco, and last September, he even opened up his own office in the Bay Area.

In many ways, Paul’s libertarian ideals are a perfect fit for Silicon Valley. The industry has developed a notable strain of anti-government sentiment in recent years, fueled by revelations about the NSA’s surveillance activities. This is the same industry where a major firm can argue that HIPAA regulations meant to protect patients’ medical data go too far and a CEO can seriously suggest creating offshore cities to avoid governments and laws altogether.

Of course, it’s not just these his stance on net neutrality that makes Paul problematic for Silicon Valley. Like many libertarians before him, Paul’s tough and dogmatic approach to government regulation means he also opposes some stalwarts of U.S. law—like the 1964 Civil Rights Act, a stance that will surely be reanalyzed in the face of Indiana’s controversial bill that would allow Christian businesses to discriminate against the LGBT community. This is of particular concern to the tech world. Apple CEO Tim Cook announced his own opposition to the Indiana bill, and dozens of startup CEOs followed suit.

His dual stances on net neutrality and government surveillance, however, make Rand Paul a litmus test for which priorities these companies (and voters overall) hold dearest. If major donors want to embrace their futuristic ideals free of messy government regulation, then they should embrace Paul. But if they want the government to help them preserve their own business interests from firms like Comcast and Time Warner, they’ll need to embrace a candidate with a degree more flexibility than Paul offers.