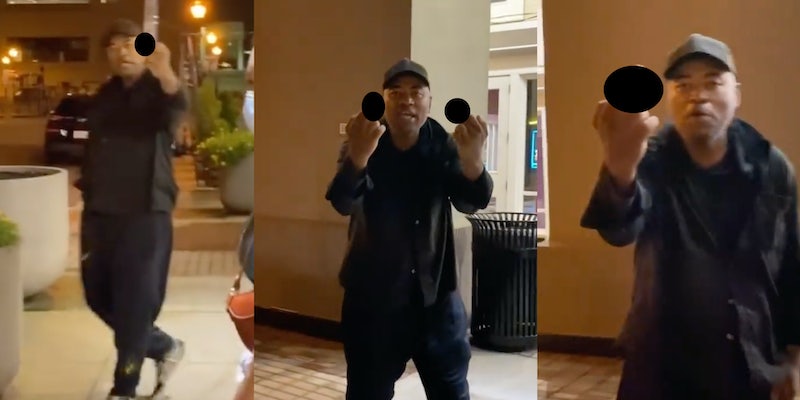 The man calls him a ‘China b*tch’ and tries to enlist white passerby to help ‘whoop’ him.

A Maryland man was beset by a racist passerby moments after exiting a showing of Shang-Chi and the Legend of the Ten Rings Sunday evening.

The man, fashion and cosplay photographer Jeff Chan, said he was exiting a movie theater following a showing of Shang-Chi when a stranger approached. He captured some of the following interaction on video, and provided context for the lead-up via a caption on Instagram. According to his caption, the man approached Chan asking for help. Chan immediately agreed to help the man, but, seeing that he was maskless, asked the stranger to keep a 6-foot distance. This apparently set the man off.

In the video captured by Chan, the man—dressed all in black and wearing a baseball cap—has already escalated to the point of using the N-word. Middle finger raised, he repeatedly calls Chan the N-word and tells him to “get out of here.” He also seems to threaten Chan, asking if “you want a gang, N-word? Stay there.”

In a second video, the man appears to be even more pressed. He is following Chan at an uncomfortably close distance, middle finger thrust forward. He tosses a range of racist insults Chan’s way, calling him a “f*ggot,” “China b*tch,” “pussy,” and, according to Chan’s caption, a “ch*nk.” After threatening to get Chan “locked up,” the man notes that he needed help obtaining an Uber, but Chan’s request that he maintain a safe distance apparently crossed the line. Chan claimed, via the clip’s caption, that when one of his female friends attempted to intervene, the man said he wasn’t “afraid to hit a woman.”

As the video comes to a close, the furious man crosses in front of a white man who is determinedly focused on his phone. He hesitates and asks the bystander if “you wanna whoop this guys ass,” to which the white man, eyes still on his phone, simply says “nope.” Chan said, in an interview with NextShark, that he thinks the incident appeared to be racially motivated. “I think it was definitely race-motivated because he asked the white guy if he wanted to help him assault me. Ironically, the movie Shang-Chi just finished,” he said.

Chan uploaded the video to his Instagram page, which is typically home to brilliantly realized cosplay photoshoots mixed in with the occasional fashion photography. He noted, near the end of his accompanying caption, that he “never thought something like this would happen so close to home.”

Chan polished off his post by pointing out that “Asian hate is still a thing.”

In the comments section, people voiced their support for Chan and applauded him for his handling of the “scary” situation.

According to reporting from NextShark, Chan ultimately decided that the man’s behavior warranted a call to police. He told the publication that he was concerned the man “was a danger to society, especially since he was standing in front of a movie theater.”

In an odd twist, Chan said he was actually pulled over for talking on the phone while communicating with police. The mix-up was quickly sorted out, but Chan said that he is unsure if police actually documented the incident. The Daily Dot has reached out to Chan and will update this article if he responds.