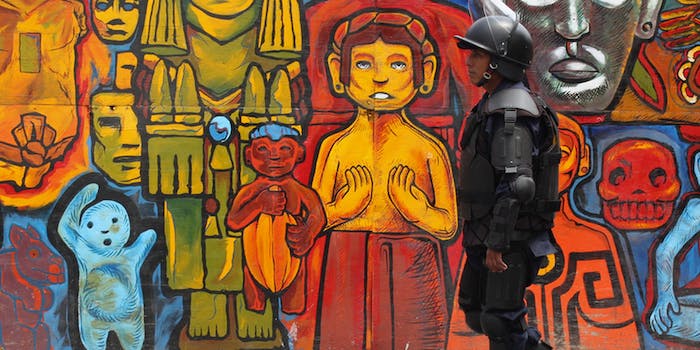 “Maybe they deserve it.”

It’s those words that stuck with me as I returned home from a birthday party in the gentrified Cobble Hill neighborhood last summer. Sliding past the turnstile of the train station into the brisk, dewy Brooklyn night, my New Yorker “sixth sense” scanned around for any sign of unrest, while I kept stock of my belongings, watchful of any person following behind too closely too long. All perfectly reasonable, dare I say, recommended, actions to take in the dark early morning of metropolitan life.

As a young Hispanic man, however, I stood on alert for an added danger, one that the speaker of those aforementioned words, a suburban white liberal woman who originally grew up in Ohio, and who replied as such to my friends’ discussion of racial profiling, likely never worried about. I, as I do at all times of day or night, was hoping not to run into any cops.

Ostensibly, much has changed in the preceding year, since a federal judge, presiding over a class action lawsuit filed against the city, ruled unconstitutional last August the policing policy of aggressively questioning and sometimes searching persons officers simply deemed suspicious, a practice colloquially known as Stop-and-Frisk.

This January, under the newly installed administration of Mayor Bill De Blasio, the city announced they would take down their ongoing appeal of the decision and reach a settlement, signifying a willingness to reform the NYPD’s much beleaguered image. Indeed, the number of recorded stops this year plummeted across the board, a distant cry from the 685,724 stops recorded at the height of Stop-and-Frisk in 2011, 87 percent of which involved a black or Latino New Yorker, and another 88 percent of which were not arrested or given a citation.

Yet the tension between the city’s cops and its minority citizens remain high, stoked in part by the controversial shootings elsewhere of those like Michael Brown or John Crawford III this summer, but more personally by the recorded homicide of black Staten Island resident Eric Garner, who died sputtering for air as a result of an illegal chokehold administered by police. His alleged crime? Selling untaxed cigarettes.

Just this past Saturday, an anti-police brutality rally was held in the heart of Sunset Park, Brooklyn, invoking Garner’s death as well as a recent incident involving Sandra Amezquita, a Hispanic woman who was five-months pregnant, being shoved down onto the ground belly-first and handcuffed during an altercation with officers. (For disclosure’s sake, I was in attendance at the rally for a short time.) This comes on the heels of other alleged acts of police violence this summer in the city, including the beating of 23-year-old Bronx resident Santiago Hernandez by six officers, allegedly for a noise complaint.

These incidents, recorded that they were, carry a different weight than the Amadou Diallos and Abner Louimas of a previous generation did before. Within hours of its occurrence, Garner’s appalling death was displayed on YouTube, from multiple sources, and virally shared across the country. Similarly, Hernandez and Amezquita’s encounters with the NYPD leave little to the imagination to be misinterpreted. After weeks of obfuscation, the video of John Crawford III’s shooting was released to the public, showing a 22-year-old man with seemingly no awareness of the two police officers about to kill him for the sin of carrying a B.B. gun.

Perhaps now a foreboding sign, Twitter users in April hijacked the #MyNYPD hashtag originally created by the police department to showcase their positive interactions with the public. What followed was a masterclass in trolling, the hashtag featuring snapshots of police bullying, beating and pepper-spraying unarmed citizens.

In August, a group of teenagers created an app intended to gather detailed reviews of police interactions, another in a growing line of digital tools utilized specifically to capture any potential police abuse right as it occurs. (Frustrating yet hardly surprising is the fact we have no national database of citizens killed or injured by police.) The landscape has changed, from the bottom up. It is harder than ever before to stare blankly ahead and not see a pattern of gross misconduct disproportionately committed against minorities displayed across our social media feeds.

Yet as The Nation’s Mychal Denzel Smith wrote last week, this greater awareness by the public of institutionalized racism doesn’t necessarily reflect a greater willingness to do anything about it, predictably splitting down racial lines. Smith detailed a Stanford study by psychologists Rebecca C. Hetey and Jennifer L. Eberhardt in which they found that the larger the racial disparity of prisoners they presented as fact to their white volunteers, the more they endorsed policies like Stop-and-Frisk. Plainly put, the more the criminal justice system punished minorities (blacks specifically in the Stanford study), in spite of its widely known racial biases, the more white people felt they deserved it.

Prevalent, too, is the attitude that while these acts of police abuse are clearly an outrage, they must not necessarily be tied to race. In the wake of the Ferguson shooting of Michael Brown (sadly unrecorded), a poll conducted by the Pew Research Center found that 80 percent of African Americans felt the shooting had brought up important issues of race, while only 37 percent of whites did. Ferguson is itself a place with a checkered history of police activity toward minorities, blacks more frequently stopped yet less frequently caught with contraband in 2013, according to racial profiling data of the Ferguson Police Department.

Stop-and-Frisk is now over in NYC, but it was largely an invisible issue to even the white liberal-minded progressive before, during, and after its implementation, who rarely suffered its demoralizing effects. So, too, are the acts of police harassment more often heard than felt, and more easily turned down to an inaudible whisper.

Though even that might be too gentle a characterization, as Robert P. Jones of The Atlantic showed in an August piece, pointing out that according to data from the annual American Values Survey, the average white person’s social network is 91 percent white, basing that figure on the number of minorities they had discussed any important matters with in the last six months. A full three-quarters of those whites polled had zero significant interactions with a minority in that time period. (Jones was a co-author of the survey)

These gaps in understanding echo out in the “real” world, as I saw for myself at the rally, which while filled with an exuberant group of black and Latino faces, was only sparsely attended by any white people.

Meanwhile, local media outlets lament the end of Stop-and-Frisk with disingenuous, misleading spin articles, authored by white journalists, raising the specter of the crime-ridden ’80s and early ’90s by quoting police sources that warn of blood on the streets again and highlighting the slight increase of shootings citywide in 2014. Only briefly, if at all, do they mention the fact that the total violent crime rate (including murder) has once again dropped relative to last year, a steady decades-long trend that minisculely correlated to an increase in the number of stops to begin with.

According to the NYPD’s own data, there have been a total of 859 reported shooting incidents so far this year, an increase of 44 over 2013’s numbers. Conversely, there have been 76,100 reports of violent crime, a decrease of 3,100 compared to last year. Yet the former is plastered all over our front pages.

Photo via geezaweezer/Flickr (CC BY 2.0)