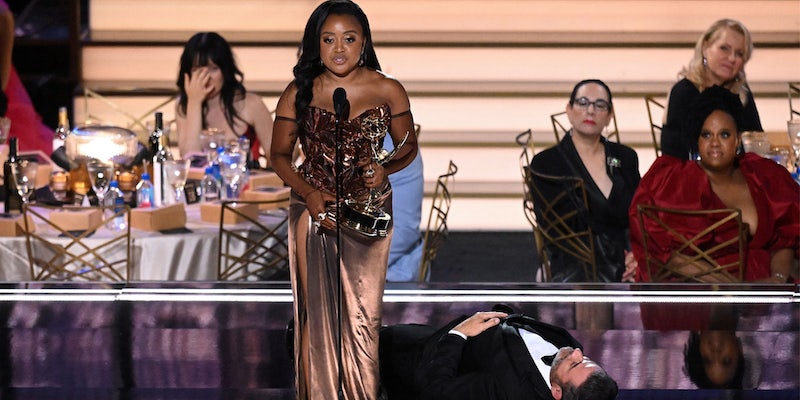 There were so many terrible bits at last night’s Emmys, but Jimmy Kimmel’s was the biggest flop.

Abbott Elementary, the show created by and starring Quinta Brunson, picked up three Emmys, including Sheryl Lee Ralph for supporting actress. Brunson won an Emmy for writing on the comedy series, which is an integral part of the show’s success.

Unfortunately, before her historic win—she’s only the second Black woman to win the comedy writing category—Kimmel and Will Arnett did a dumb bit where Arnett dragged his body on stage as if he were dead.

And then when Brunson won, Kimmel just committed to the bit and stayed on the ground, crowding her shot. The optics did not sit right with people.

“If #QuintaBrunson stepping over #JimmyKimmel who literally laid in her spotlight on the day she won an Emmy isn’t a metaphor for what it means to be a WOC in a white mans world I don’t know what is,” said one tweet.

She added that Kimmel “gave me my first big late-night spot” and that she’s “gonna be on his show on Wednesday so I might punch him in the face, I don’t know.”

People were reminded of that time Kimmel was involved in the Moonlight–La La Land Oscars disaster, too. Late Monday, Kimmel told Entertainment Tonight that he had his “eyes closed, I had no idea where I was,” so he wasn’t really thinking about optics. He went on to praise Brunson’s talent, but we can safely say Jimmy Kimmel knew exactly where he was.

Abbott Elementary returns for season 2 next week on ABC.