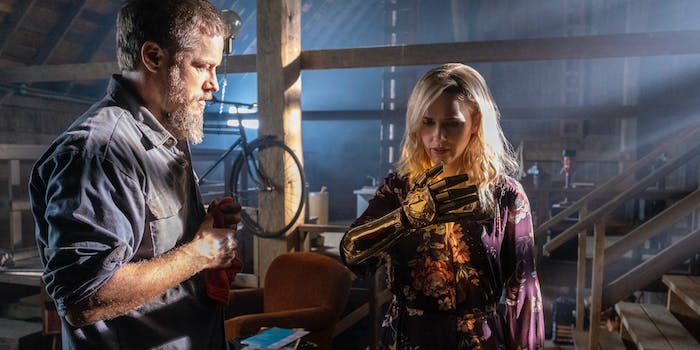 The streaming service is shutting down after only six months.

In a move that absolutely everyone saw coming, Quibi announced on Wednesday that it was shutting down just six months after its launch.

Quibi founder Jeffrey Katzenberg and Quibi CEO Meg Whitman made the announcement that it would be shuttering the short form streaming service in an open letter addressed to employees and investors on Wednesday. (The Wall Street Journal was the first to report on Quibi shutting down.)

“Our failure was not for lack of trying,” Katzenberg and Whitman wrote. “We’ve considered and exhausted every option available to us.”

They added that there were likely two possible reasons for Quibi’s failure to make a mark. Noting that “we suspect that it’s a combination of the two,” Katzenberg and Whitman believed that Quibi “wasn’t strong enough to justify a stand-alone streaming service” and that the COVID-19 pandemic when Quibi launched proved to be remarkably bad timing.

For Katzenberg and Whitman, the plan was to return $350 million in capital to investors instead of attempting to pave a way forward; staffers who are about to be laid off will also receive a severance package, but it’s unknown what that severance package will look like. Quibi will look to sell some of its content to other companies. In recent weeks, Quibi had been looking at other options, including selling Quibi.

Who could’ve foreseen the end of Quibi? Most people, probably, from consumers to creatives to the people who cover the entertainment industry. Ever since Quibi was first announced in 2019 with $1 billion in funding (Quibi would have control of nearly $2 billion before it will be shut down) with names like Steven Spielberg, Guillermo del Toro, and Idris Elba attached to it early on. But nothing about Quibi, from the name (which is short for “Quick Bites” but pronounced like “Quibby”) to the format of six-to-10-minute episodes, sounded appealing. It quickly became something like a Twitter punchline, and even after advertising at the Super Bowl and the Oscars, most people were reportedly unaware that Quibi was a streaming service; according to market research, 70% thought Quibi had to do with fast food service.

Long before Quibi launched in April, the company seemed to have an endless supply of cash to throw at celebrities with huge followings, like Sophie Turner and Chrissy Teigen, without any guarantee that fans would pay $4.99 a month for a new streaming service. The company’s target demo watches YouTube and TikTok, which are both free. Every new Quibi venture, as Tom Gara noted on Twitter, “sounds like the new show [30 Rock’s] Jack Donaghy is pinning his hopes on to turn NBC around in 2008.”

When Quibi launched, the jokes continued and many of the shows Quibi put out were panned. They were boring or offensive or completely garish; many were just bad. Others suffered from structural issues that made scripted series feel more like someone chopped up a movie without any idea of how to build tension in a story. Sure, Quibi eventually won two Emmys (out of 10 total nominations), but it did so in two short-form categories where four of the five nominees were affiliated with Quibi shows.

Many of Quibi’s daily shows couldn’t launch when Quibi launched because COVID-19 brought Hollywood to a standstill, not to mention that the ideal times to watch Quibi content—a commute or while waiting in a doctor’s office—were effectively taken off the schedule as the world locked down. You could only access Quibi on a smartphone, and with everyone in lockdown, we didn’t necessarily need to watch everything on our phones (but we couldn’t watch them on a TV or computer screen).

By July, Quibi lost around 90% of initial subscribers once their three-month free trials ran out. Even a home video production of The Princess Bride in which celebrities reenacted scenes from the movie (and included Carl Reiner’s final performance) didn’t seem to help.

Katzenberg and Whitman found people, entities, and deadly viruses to blame for Quibi not meeting expectations; they didn’t seem to entertain the idea that Quibi was a doomed venture in its current form from the start. Katzenberg literally blamed COVID-19, telling the New York Times in May that “I attribute everything that has gone wrong to coronavirus.”

In a damning Vulture profile of Quibi, Katzenberg is painted as someone who refuses to listen to the advice of others and an ex-employee says that Katzenberg would say that he knows “millennials better than millennials.” Whitman, on the other hand, reveals herself as someone who doesn’t keep tabs on television despite making television of her own; neither Katzenberg and Whitman are shown to not understand or know what the audience they were trying to reach wanted.

Even Quibi predicted the slow and entirely preventable demise of Quibi, thanks to its only viral hit: The “Golden Arm” episode of 50 States of Fright.

While many of Quibi’s shows might’ve been prime to go viral or inspire memes, “The Golden Arm” is a great example of why most Quibi shows never did. Quibi didn’t allow people to screenshot or share content from the app, so people couldn’t share those images on Twitter like people can with original content from competitors like Netflix, Amazon Prime Video, Hulu, HBO Max, and Disney+; in the case of Disney+, its early success is partially tied to the fact that everyone could share GIFs, screenshots, and videos of Baby Yoda after the premiere of The Mandalorian. The reason “The Golden Arm” went viral anyway is because the concept of Emmy-winner Rachel Brosnahan playing a woman who got a golden arm and refused to part with it even though it was slowly killing her was so absurd that it was worth the effort to tape it.

In a scene that feels like it came straight out of an outlandish Quibi show, WSJ reported that on a video call Wednesday, Katzenberg suggested that Quibi employees (who would soon lose their jobs) listen to “Get Back Up Again,” a song from the children’s animated film Trolls, to raise their spirits at the prospect of soon becoming unemployed.

Who could’ve foreseen Quibi’s demise? Pretty much everyone who wasn’t in charge of Quibi, and thousands of soon-to-be-former employees—and creatives whose shows were picked up but will no longer happen—will suffer the consequences. But at least we’ll still have the jokes.