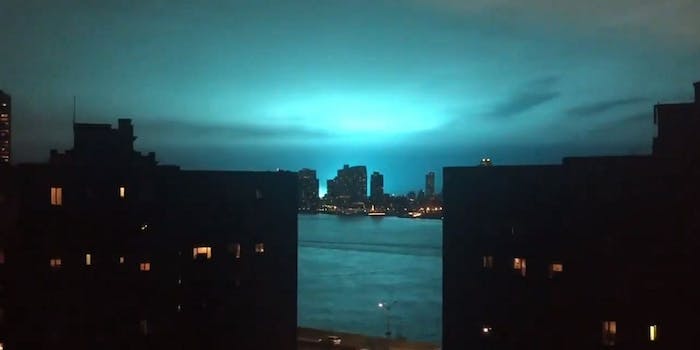 The sky over New York City was filled with strange blue lights on Thursday night, shocking locals and causing wild speculation on social media. People thought it was everything from an alien invasion to the crowning of a new Pizza Rat. The real answer turned out to be much more mundane.

A transformer explosion at the Con Ed substation in the Astoria area of Queens caused the strange light show. No one was injured but LaGuardia Airport lost power, grounding flights. Several homes in the area also briefly lost power and the No. 7 train was delayed.

Crazy pulsating blue light with plumes of smoke either from north-western Queens or just across the river pic.twitter.com/cUxiDtEF9l

“What people were seeing was an electric arc flash,” Bob McGee, a spokesman for Con Ed said, according to the New York Times. “The electrical arc of that magnitude is similar to a thunder and lightning event.”

The New York Police Department did not report a cause for the explosion but did rule out an alien invasion.

Confirming incident in #Astoria was result of transformer explosion. No injuries, no fire, no evidence of extraterrestrial activity. Please continue to follow @FDNY and @Conedison

Without a clear explanation, New Yorkers were happy to offer up their best guesses.

Blue smoke in Queens means a new Pizza Rat has been chosen pic.twitter.com/JI8IBujbZB

It’s that scene from Ghostbusters. You know the one. https://t.co/GAv83uoSea

Stranger Things season 3 is going to be wild https://t.co/yDhFT6Koe7

The next morning, one man lamented the press for missing out on the perfect headline for the blue lights.

The fact that the Queens explosion isn't on the cover with the headline "Astoria Borealis" is a dereliction of tabloid duty. pic.twitter.com/J9nM2nF0iF

Con Ed tweeted an apology to anyone who lost power and said that “powers lines servicing the area are stable.”

Last night’s electrical fault caused a sustained electrical arc flash & transmission disturbance. There were no injuries and all the power lines serving the area are stable. We apologize for the disruption to customers. Photo: Wall Street Journal. #Queens #Astoria pic.twitter.com/c6chBF4BFL

Con Ed also tweeted a picture of employees working on the problem in the Friday morning light, in case anyone suspected they were slacking off.

So no aliens, no superhero battles, no wrath of god. It was just another day in New York City, and really, isn’t that exciting enough?