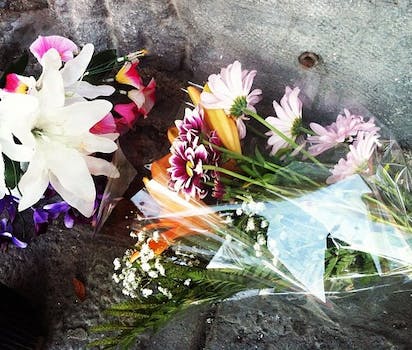 Moments after Parti Québécois (PQ) leader Pauline Marois began her victory speech following Quebec’s provincial elections, two men were shot outside the venue where the party’s bigwigs had gathered. One of the victims died, and a third person at the scene was treated for shock.

The alleged gunman, a 62-year-old man who was arrested, also reportedly started a fire at the Metropolis concert venue in Montreal around midnight ET Wednesday. The blaze was quickly extinguished.

As soon as news of the shooting broke (it was initially believed a blank was fired), Marois was ushered offstage.

The apparent assassination attempt on the province’s new premier-elect, along with the election itself, was widely discussed online. Metropolis, Quebec, #qc2012 (a general election hashtag), #marois, and #pq were all Twitter trending topics in Canada Wednesday morning.

Perhaps mindful of an incident earlier this year in which a man issued death threats to former premier Jean Charest on YouTube, Quebec Provincial Police Lt. Guy Lapointe urged the public not to make comments that could be perceived as threats on the Web, even humorously.

“People who make threats will be tracked and prosecuted,” Lapointe said, according to the Montreal Gazette. “Sometimes we say things that appear to be a joke, but we are going to take these comments very seriously.”

At least one man wasn’t careful about what he wrote on Facebook, however. According to Les Affaires, Blake Marsh commented, “You just can not find good assassins these days!” while posting a link to a report on the attack. He followed by saying, “I give this bitch a month before someone comes forth with better aim and does what must be done.”

As a result of his actions, Marsh was fired by video game firm Eidos Wednesday morning.

Meanwhile, Reddit’s r/montreal subreddit blew up with threads about the incident.

Redditors discussed and debunked the theory that a bullet hole appeared in the screen behind Marois, while a PQ member suggested that there was no hole at all and instead it was a glitch with an LED.

As the alleged shooter was whisked to a police cruiser, he said, in French, “The English are waking up.” Marois, who ran on a pro-separation platform, intends to tighten French language laws in the province, requiring candidates for office to be fluent in the language and legislating English-language college access more strictly. A separation referendum is unlikely though, as the PQ was elected to a minority government.

Independence and language issues are hot-button topics in Quebec, and redditors were left wondering what the shooting incident meant for the latter in the light of the man’s comments.

“I like how he screamed it in French,” wrote austin944 in the r/canada subreddit. “I mean, it makes sense that he would want to be understood, but you’d think he would’ve reserved super Anglo-centrism to the English language.”