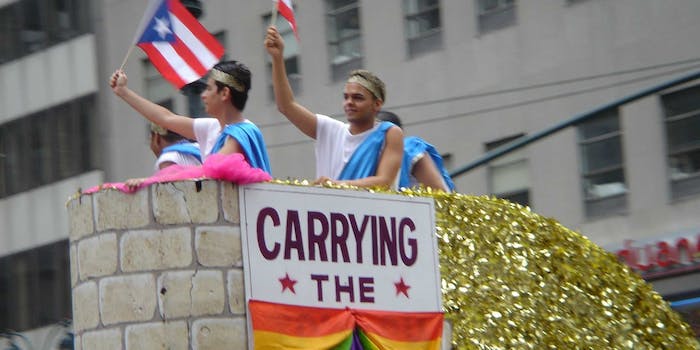 "Be careful at the [gay rights] march," tweeted Joseph Morales Serrano. "It could end like Boston."

Facebook has become rather notorious as a destination for criminal idiots. But apparently, it’s not the only social media site the cops visit, as Joseph Joel Morales-Serrano has found out.

Morales, apparently incensed by a gay pride march on his home island, the U.S. territory of Puerto Rico, on May 6 and 7 posted a series of profane and violent messages on his Twitter account, @leonidapr, directed at gay Puerto Rican human rights activist, Pedro Julio Serrano.

One of the messages, posted at 8:30 in the evening on May 6, read “@PedroJulio cuidado en la marcha que puede terminar como boston pendejo.” (“Be careful on the march because it can end up like Boston, dumbass.”)

According to a statement by Special Agent Moises Quiñones, a spokesman for the Federal Bureau of Investigation in Puerto Rico, Serrano was arrested at his home in San Juan on May 17 on a charge of cyberbullying.

Serrano told the AP he did not know Morales personally but thinks he is the source of other threats he has received. He had asked police in both Puerto Rico and New York to investigate those threats, but followed up by contacting the FBI once the tweet was posted that seemed to threaten a Boston Marathon-type bombing.

Why the charge was “cyberbullying” instead of something more serious, up to and including terrorism charges, is uncertain. However Quiñones wrote, “If convicted, the defendant faces up to a maximum of five years’ imprisonment for cyberbullying after transmitting in interstate or foreign commerce a communication containing a threat to injure the person of another.”