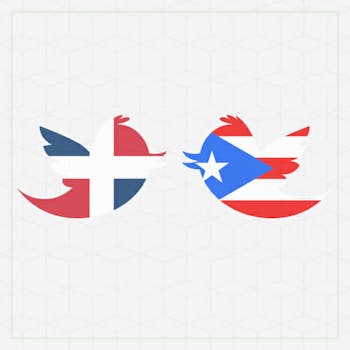 Puerto Rican and Dominicans hashtag out their problems

Puerto Ricans and Dominicans took to Twitter to  discuss  their various problem—in the only way one can on Twitter: a hashtag war.

Who needs a therapist or a boxing ring when you can air out all your problems—and fling racially-charged epithets—on Twitter?

That has been the case today with the two top trending topics in the U.S., #puertoricanproblems and #dominicanproblems.

The tweets using these hashtags are both self deprecating and insulting. People have taken to insulting each other’s food, mannerisms and culture.

“#DominicanProblems Not accepting the fact that they are Black People that Speak Spanish,” tweeted @theilluminati.

So the question is, why is there so much animosity between these two Caribbean neighbors?

And the answer, albeit not definitive, is immigration.

Since 1966, more than 118,000 Dominicans have legally (and more than 30,000 illegally) immigrated to Puerto Rico and are “the largest and most visible ethnic minority on the island,” according to a study called “Dominican Migration to Puerto Rico: A Transnational Perspective.”  And like immigrants from other countries, the reason for this mass exodus is to find better jobs (which was also addressed using the #domincanproblems hashtag).

On the other hand, many blogs and Yahoo Answers argue that the animosity has to do with Puerto Rico being an American commonwealth, making its residents eligible for Social Security and other benefits.

At the end of the day, it looks like it’s going to take more than 140 characters to settle the problems between these two islands.