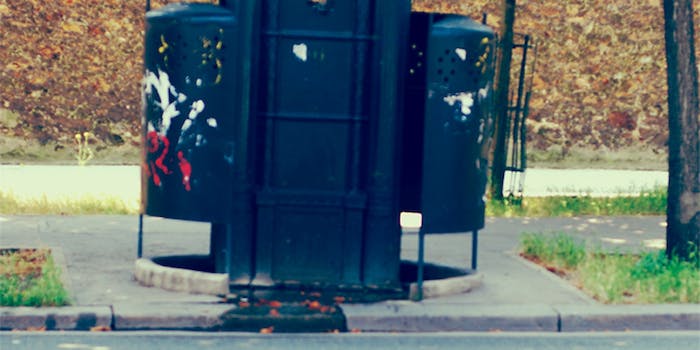 For San Francisco, a tech solution to its rampant public urination

Residents of the city have gotten fed up. And so San Francisco has been coating its walls with a special treatment that repels human urine and even bounces it back to whence it came.

This idea originated in the St. Pauli neighborhood of Hamburg, Germany. Like Hamburg, San Francisco has that rare combination of young people, a party environment, tons of tourists, and a large homeless population. Certain walls and corners have taken on the acidic tang you can only get when thousands of people have emptied their bladders in the same place for years.

The paint, manufactured by the Florida company Ultratech, is called Ultra-Ever Dry, it is an ultraviolet superhydrophic  and oleophobic paint similar to that used on ship hulls. It keeps the urine from penetrating the wall and occasions a surprising backsplash. Try it on a horizontal surface and the liquid beads up and runs off the lowest edge.

The city’s public work’s department has treated about a dozen locations with the Ultra-Ever Dry so far. But this is not the first stab the city has made at taming public urination.

In the late ’90s, San Francisco put up 25 high-tech, self-cleaning toilets, mostly in the high-density tourist areas up and down Market Street. Although they claim to be paid for by the advertising sold on the structures, they have yet to create more. They look expensive enough (not to mention having an eerie resemblance to Futurama’s suicide booths) that you can understand how Ultra-Ever Dry, at $200 a pop, might seem more appealing.

(Not to mention the enduring issues with cleanliness and the use of the kiosks for activities of a more adult nature.)

A compromise between the expensive computerized toilets and peeing on a wall might be the vespasienne, or “pissoir” once so popular in Paris. The first one went up in 1834 and its simple design and cheap manufacture made it popular. The American writer Henry Miller wrote a heartfelt rhapsody for this machine that made outdoor pissing civilized.

Oh course, its design—it was really just a ballpark-style urinal with a screen on it, was a bit more gender-specific than we tend to tolerate now. So for the time being we’ll have to make due with a treated wall.