Elliot Rodger didn't kill people because he was crazy and hated women. He just needed "game."

In the wake of the University of California at Santa Barbara shootings on Friday night, people were left with a wide range of emotions: sadness, because seven lives were needlessly cut short; anger, at 22-year-old shooting suspect Elliot Rodger and the racist and misogynistic ideals he espoused; and frustration, with a culture that allows lonely and angry men like Rodger to own firearms, giving them the tools to express that loneliness and anger with lethal consequences.

But of course, that’s not how the PUA (pick-up artist) community reacted. The PUA community reacted to the shootings by saying that if Elliot had gotten laid, he wouldn’t have allegedly shot people.

The PUA backlash started with a comment on Rodger’s (now-removed) final YouTube video, a near-seven-minute diatribe where he rants about being denied “affection and sex and love” from “stuck-up blonde sluts.” A YouTuber with the handle Strategic Dating Coach evidently saw the tragedy not as an opportunity to reflect on culturally sanctioned misogyny or our need for more stringent gun control laws, but as a really awesome promotional opportunity for his website: 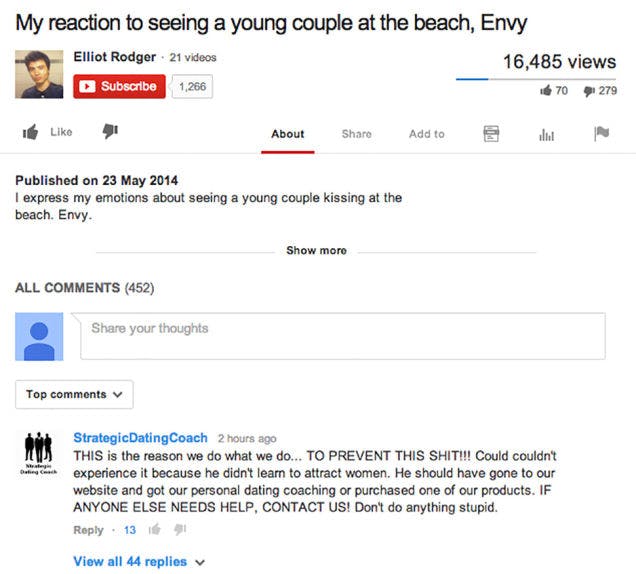 Screengrab via Jezebel, The Albatross

Strategic Dating Coach’s message, of course, is pretty straightforward: “Had Rodger been well-versed in the art of the pick-up, he no longer would’ve wanted to intern all women and systematically starve them to death in concentration camps, as he describes in his manifesto. Of course, he still would’ve wanted to kill women, because he was fucking crazy. But if he’d had sex, he might not have wanted to kill them, like, as much. Also, check out Strategic Dating Coach! It has more than 200 likes on Facebook, so that’s pretty cool.”

The comment angered so many people on YouTube that the Albatross interviewed the man behind the Strategic Dating Coach website to ask him whathe’d been thinking when he posted the comment. The man, who identifies himself only as Steve, denied using the UCSB shooting as an opportunity for self-promotion; rather, he just wanted to point out that the tragedy could have been prevented had Rodger availed himself of his services, which he describes as “a form of therapy.”

“I’m not saying I could have solved his entire situation but I could have at least helped him with what seems to be the main problem, which is him not being able to get interest from women,” Steve told the Albatross.

(Of course, Rodger’s manifesto goes on at length about his dissatisfaction with traditional PUA sites, which ultimately led him to the even more aggressively misogynistic antiPUA.com. But OK, Steve, go ahead and keep talking about how your arm-touching techniques could’ve saved the lives of seven people.)

Strategic Dating Coach’s attempt to turn the UCSB tragedy into pageviews was followed by an article by the pickup artist Roosh on Return of Kings, his blog for “heterosexual, masculine men.” In the piece, which we won’t deign to link to here, Roosh argues that it wasn’t Rodger’s mental illness that prompted him to kill. Rather, it was the fact that he’d never put his penis in a woman’s vagina:

“Six lives would have been saved if there was a societal mechanism to steer sexually frustrated males like Rodger into learning self-improvement, game, and masculinity, the very values that are taught here and on many other manosphere sites.”

Roosh then goes on to blame the tragedy on a wide range of sources—among them the media, the field of psychiatry, university syllabus warnings, and sexually profligate American women—until arriving at the one person who could have kept Rodger from pulling the trigger: himself.

If Rodger came to me, he would have received actionable and effective advice. He would have been exposed to material detailing how socially corrupt American society has become, and how being a beta male provider—his principal strategy in trying to get laid—is no longer useful in achieving intimacy with women who now see men as entertaining clowns that should provide them with excitement, drama, and tension.

Roosh ends with the ominous conclusion that until men like Rodger are provided with access to unlimited sex—either by engaging in legalized prostitution, learning “game,” or, weirdly, “seek[ing] out a Thai wife”—”it’s inevitable for another massacre to occur.” Hear that, ladies? The next time some creepster starts harassing you on the street or following you home or, as Rodger by all accounts did, just giving off general “I want to use your skin as a lampshade” vibes, better spread those gams and drop those drawers, because Americans’ lives could be at stake.

Just in case it isn’t clear to everyone already: When people decide to take the lives of others, it rarely, if ever, has to do with just one thing.