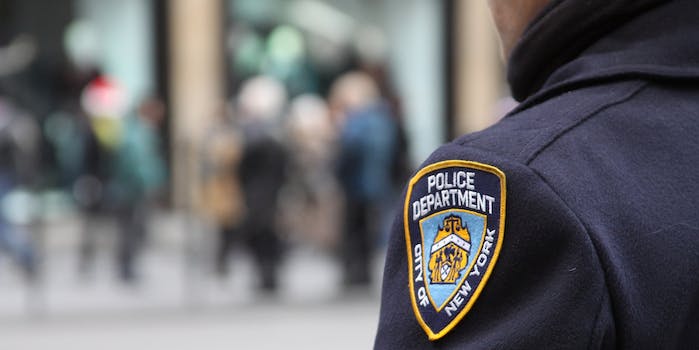 Civilian-on-cop violence is rare, and it has nothing to do with Eric Garner.

Ever since the brutal murder of two NYPD officers, Wenjian Liu and Rafael Ramos, over the weekend, police departments all across the country have been ratcheting up security, awareness, and showing support from one to another. Unfortunately, another motive has been apparent for some of the people rightly mourning the deaths of these two men: Using the incident to denigrate or condemn protests against police violence. Which is why it’s a good time to note that the majority of police killers last year were white, so it’d be a lot fairer to back off of this aggressive tact.

Detailed expertly by the Nation’s Gabrielle Canon, the FBI’s data on killings of police officers in 2013 lays bare two distinct realities that are hugely important in the context of these new heightened tensions—many NYPD officers, after all, have reportedly lost faith entirely in Mayor Bill de Blasio, refusing even to look at him as he passed them in a hospital hallway.

First, despite undeniable, deep, and simmering tensions between law enforcement and many communities of color throughout the United States, as well as the lopsided prosecution and incarceration of black Americans, more white people were alleged to have killed police officers in 2013 than black people, by a count of 15 to 11. Second, and maybe most importantly, killings of police officers are near record lows for the last 50 years. Violent crime in America has been on the decline writ large, as a matter of fact, and that relative peace has been seen in increased safety for police officers, as well. After anti-police violence hit its modern-era peak in the 1970s, things have progressively been getting safer and safer for American law enforcement.

If these sound like political arguments that feel irrelevant or unimportant after such a tragic couple of killings, I truly do sympathize. I don’t bring this up to minimize what’s taken place, but I actually think this is pretty important. I bring this up to say that a deeply troubling narrative started to emerge very quickly after the shooting, bolstered by incendiary and extreme statements from Pat Lynch, head of New York City’s biggest police union—the notion that this act of violence was the result or fault of those protesting against police violence recently, in particular over the chokehold death of Staten Island resident Eric Garner, for which NYPD officer Daniel Pantaleo went unindicted.

It’s a narrative that’s taken hold in spite of entirely reasonable doubts as to the true cause of this crime—namely, whether suspect Ismaaiyl Brinsley acted strictly out of sincere vengeance, or whether he was, as white perpetrators of violent crime are sometimes assumed, suffering from some form of severe mental illness. Those aren’t necessarily mutually exclusive, of course—Brinsley’s anti-police social media posts, as well as his alleged shooting of his ex-girlfriend in Baltimore before the incident, speak to both possibilities. (Thankfully, the woman is reportedly expected to survive and recover.)

But ultimately, it’s kind of irrelevant. Even were Brinsley a violent zealot inspired by Garner’s death, that’s no reflection on the people who are out in the streets, actively and peacefully campaigning both for less violence and more accountability. And amid all the justified grief and rage within the NYPD right now, it’s worth considering the same rage and grief that members of these protests feel when someone from their own community is wrongly killed. If we could possibly see our way to a more reasonable and humane discourse about all this, it’d surely be in everyone’s best interest.