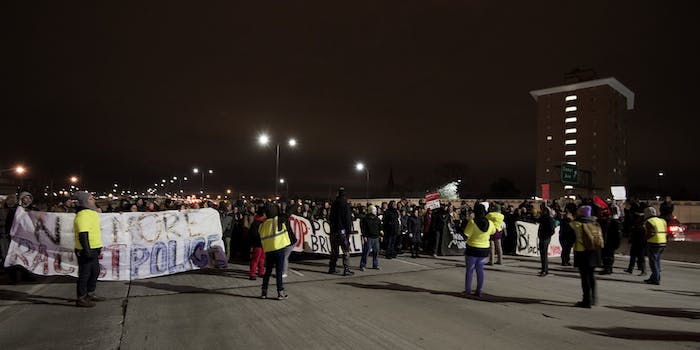 Why protesters take the streets

Linking arms on a freeway makes us feel less alone.

I spent my early twenties doing what Boston #BlackLivesMatter protesters are doing now, though for different reasons. In the mid-2000s, because of the War on Terror, the PATRIOT Act, the wars in Afghanistan and Iraq, and just George W. Bush in general, I blocked traffic, occupied intersections, and made life difficult for not only the police but also commuters on their way to a bar or eager to get home from work.

Recently I participated in #BlackLivesMatter protests in both Fort Lauderdale and Miami, and I even wrote a love letter to “The People Complaining about the Inconvenience of Highway Shutdowns.”

While Martin Luther King, Jr. day has come and gone, these disruptions will inevitably continue, and there’s an intra-psychic element beyond concrete civil disobedience to promote social change in this form of protest that needs explanation.

On the surface these forms of protest seem irrational. What are you going to accomplish by clogging traffic? The war’s not gonna end. Darren Wilson won’t be indicted. Despite the contrary to the New York Police Department’s Orwellian double-speak, Eric Garner will remain a casualty to a police chokehold and structural racism.

Deep down, protestors know this.

But people who are so deeply affected by the constant push and pull of oppression begin to see villains everywhere in their daily lives—the SUVs on the street remind them of oil nations; the cologne advert flexes muscles they’ve not grown into; the Bank of America building leans over the skyline and casts shadows; the white traffic cop barks orders at black children crossing the street.

Every single day these protestors hear the unspoken language of oppression—it is structural, seemingly unmovable oppression with multiple triggers surrounding them at any given time, in one giant cacophony of sound and sight.

And it happens when they’re alone. All day.

And for many marginalized folks, it’s very much audible, physical oppression, not the lofty symbolic oppression I speak of—it is police brutality, sexual harassment and violence, gay bashing.

And then, on the day of the protest, folks meet people like them. And they begin to talk and vent and disagree. They’re still surrounded by the structural cacophony of oppressive sight and sound, but it’s been remixed: they have friends and they’re not alone now.

And then the cops show up.

And while I can’t describe the police experience, I’m sure they want to recalibrate things, to turn the sights and sounds back to what they’re familiar with, because to them that’s order, that’s the thing that makes their lives settled.

And this is the when the parts of the First Amendment begin to blend. The First Amendment guarantees free thought (billed as religion); speech, press (writing); and assembly (performance). Protesters walk into the street together, thinking, shouting, and with media flanking.

Protesters scream, “Whose streets?” And they answer, “Our streets.”

It’s a phrase of subtexts, of poetry. In our daily lives the streets belong to us in name, with public funding and taxes we don’t think we should pay. The streets exist as conduits to get us to where we want to go. But they are expressways that lead us to our dismal jobs; they are battlegrounds of commuting where we hate reckless drivers; they bring us through broken communities. They are places where the silent oppression is very much real and audible, places where Michael Brown is gunned down by police. Our streets are occupied.

And now they’ve returned to their rightful owners.

The cops push back, they try to take back the street. Instead of the silent oppression we feel every day, we see oppression incarnate. The actual tool of the system aimed directly at us.

So now the street is something you take, and you hold like a general. Because every single day you feel powerless in the street—it’s a nagging, intangible terror. And the street is now tangible as day—it’s operating in an almost spiritual simplicity: us against them for the battle of what’s ours.

You take the street. You hold the street. You defend the street. And you protect your friends who are there with you with Maalox and water solution for tear gas. You sometimes un-arrest your friends. You run together. You sit in traffic together. Every day as you feel lack because of the overwhelming pressure, you now begin to feel that you have something and it’s intimate and it’s tangible and you want to keep it forever.

If we walk by the same street weeks later—alone again—we remember the feeling we had when it was ours for a moment.

We remember that you could alter the structure of society just a bit, and not feel so hopeless anymore.

And it gets us through the day, keeps our sanity. And for some of us, it lets us go on our way organizing for a better future, either through writing or education or working in clinic defense or community organizing or volunteering at soup kitchens or raising children to be empathetic or whatever it is we’ve decided to do to empower us and others. It’s exhausting work to make change and we need these moments.

It’s poetic to experience something different for a moment in time. If you believe in the First Amendment, you should really try and experience it like this. It’s the most visceral reason for the First Amendment—every single part of its being gets wrapped into one moment. It is the essence that Aristotle spoke of, where our hopes and dreams and oppression all intermingle in one moment in a tangible playing field, a battleground against oppression.

That is why we take streets.

When people used to ask what jazz is, musicians often said if you have to ask you’ll never know.

Take a street some day. I’m sure you’ll never complain about it again, especially if you happen to be stuck in traffic because of one.

Americans talk of the First Amendment in religious terms. The rituals are what we really fight for—not our Bible—when we take streets.