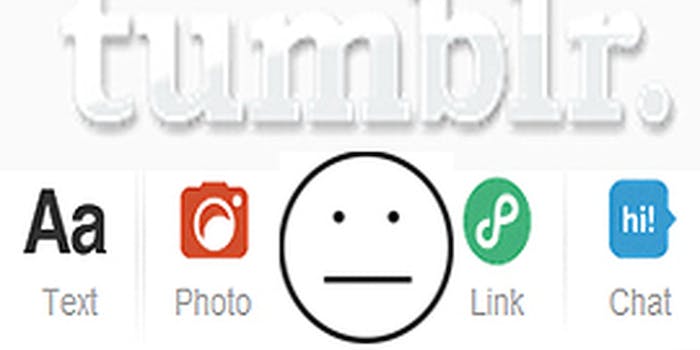 The pros and cons of fandom on Tumblr

Tumblr is making fandom more visible and accessible than ever, but at what cost?

For months, arguments about Tumblr have been circulating fandom like a looping GIF. Fandom is using Tumblr more than ever, but many fans hate what Tumblr is doing to fandom.

The argument boils down to two issues: communication and kinds of fanworks. Tumblr is an image-friendly site whose design doesn’t lend itself to text-based blogging and interaction. The emergence of a fan culture that accordingly pays less attention to textual engagement and one-on-one communication has many fans worried.

To help make sense of the debate, here’s a handy pros and cons list the Daily Dot compiled from fans and Tumblr users.

“Supernatural, Doctor Who, there are so many fandoms, and then there’s role-playing and fanfiction and reading. My life has just Tumbled downhill into fandom from there. It’s been fabulous.”

“More participants means more voices, more meta, more fanwork. There’s more equal visibility for all types of fanwork (art, vids, graphics) than there’s been in the past, when fandom’s been more heavily fic-dominated, because the common hub sites used were more text-friendly than anything-else friendly. THIS THRILLS ME.”

Con: Tumblr makes it impossible to interact with those things.

“Tumblr has taken the interpretive act out of fandom. GIF sets and photosets only allow the audience to look but not touch, turning them into a passive recipient of the source material.”

“Because there’s the option to just ‘like’ it, for all intents and purposes, Tumblr has done away with the need to actually communicate. What’s more, there seems to be no particular way to respond to the few people who do buck up and manage to actually write a thought back.”

“I started reading Harry Potter and every link that I ever found online went to someone’s Tumblr, so then I started talking more to people, I saw people that liked the same stuff I did, and I got back into it. I met my girlfriend on Tumblr. I have a whole group of friends there now.”

“On Tumblr, everybody cares.”

“For me, fandom is not about the end-product fanworks, but the conversations that get us there. I find conversations on Tumblr to be awkward, clunky, and almost impossible to follow if they involve more than two people. It’s like everyone is talking, but no one is talking to each other.”

“For lurkers who may have previously felt intimidated because they weren’t able to write reams of fanfic or participate in long meta-discussions, the ability to just be able to ‘like’ or reblog something on Tumblr is freeing.”

I’ve gotten a lot of confidence, actually, from Tumblr. It lets you share a lot of things, and people don’t look down upon you for fangirling.”

“Tumblr is a place that is particularly well-suited to signal-boosting, and there is a place for that in online culture; but fandom is about creating your own signals!”

“Tumblr made me too lazy to actually write things about things when i can just enjoy and share pictures I like.”

The lack of etiquette regarding attribution and remixes on Tumblr has led to problems for artists who’ve seen their work passed around Tumblr without correct attribution, sometimes with identifying watermarks removed. The “added source” tag is one way of combating this, but there’s also the issue of Tumblr fans modifying and editing art without permission from the original creators. For Japanese artists, these issues were so large that they created a website, Online Fanarts Protection, to publicly declare their side of the issue: “Many think that they are not ‘stealing’ because of the credit, but the authors, we prohibit reusing without permission, so that will be same as stealing to us.”

Yet despite the conflicting mediums, language barriers, remix etiquette issues, and generational clashes, the fact remains that no matter how much anxiety exists over Tumblr, fans will continue to use it for remixing art, discussion, role-playing, writing and reading fanfic, GIF sets, music, and more.

“Tumblr’s the first place I’ve ever encountered this kind of community,” noted fanartist Reapersun. “It’s so overwhelmingly positive, for the most part, and everyone’s so accessible; it’s fantastic. An artist or writer can showcase their work and become well known while also getting right down in there with the fandom and being part of it.”

It’s hard to argue with those points, given that Tumblr, with its 400 million posts weekly, makes fandom productivity so incredibly visible. Still, dissatisfaction with Tumblr as a one-stop fandom platform has been seeping through.

“I’ve actually been thinking of moving from Tumblr to LiveJournal,” one fan at the Tumblr meetup told me after listening to fans discuss the pros and cons among themselves. “I’ve just been thinking of getting a more bloggy blog.”

Ultimately, fandom’s best hope for overcoming the Tumblr divide may be in pressuring Tumblr itself to become a more “bloggy blog.” (Or at least to implement a decent comment system.) But such a move would doubtless change the spontaneous, image-loving atmosphere that Tumblr currently fosters.

And as the Tumblr debate proves, fear of change within fandom is something that unites us all.