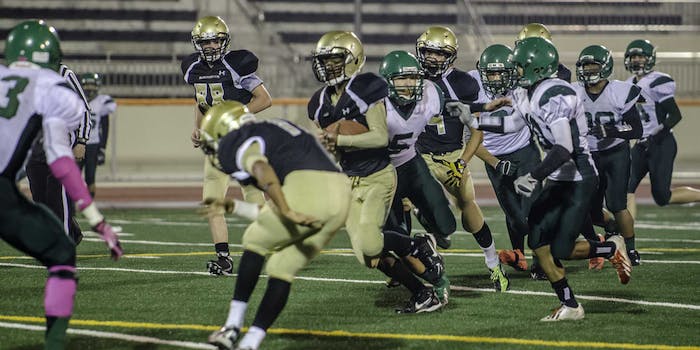 It’s called the “promposal”—asking someone to prom by way of a grand, sweeping gesture designed to knock your beloved off his or her feet (and maybe secure yourself 15 seconds of viral fame). They are precious, adorable, and are sure to be remembered by the participants for many years to come.

But at least one anonymous teen’s promposal didn’t go according to plan and will thereby live in infamy for totally different reasons. It’s all captured in this video, taken during a lull in a high school football game:

We see a young man and young woman standing on the field, surrounded by staff and audience. “Is there any way you’d wanna come to prom with me?” our suitor says into a microphone, funneling his voice to everyone within earshot of the stadium. The crowd cheers as the young lady approaches to give him her answer.

“I already have a date,” she says, a hint of laughter bleeding through.

The crowd sounds turn from “awww” to “ohhhhh!” Shaken by the reply but holding fast, the young man asks her to clarify what she means.

H/T Death And Taxes | Photo via USAG-Humphreys/Flickr (CC BY 2.0)