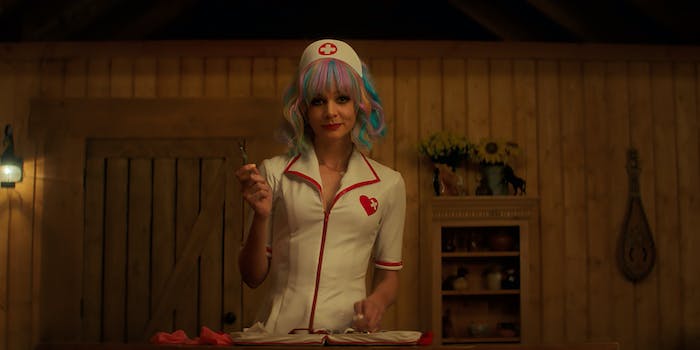 'Now that was a plot twist.'

Over the weekend, the New York Times’ Facebook page shared a link to the latest episode of Still Processing, a podcast hosted by Wesley Morris and Jenna Wortham, which delves into Promising Young Woman. The post doesn’t really indicate where Morris and Wortham land on it or what parts they felt the movie got right and wrong; the point of the post is that it’s a tease to the podcast episode, which is available to stream on the New York Times’ website and on podcasting platforms.

Regardless of whether people listened to the episode, it provided many people a place to spout their thoughts on Promising Young Woman, particularly on its ending. The end is shocking, particularly for those expecting Cassie (Carey Mulligan), the film’s protagonist, to get full revenge over the people responsible for her best friend’s death. Cassie does get her revenge in the end, but she doesn’t get to live to see it. She’s smothered with a pillow by her best friend’s rapist (Chris Lowell) while Cassie’s contingency plan—which included a video of her best friend’s rape that was passed around sent to a sympathetic lawyer—ultimately resulted in his arrest.

“It’s a terrible movie,” wrote Craig R. Brittain, who was among those to comment on the post, from a verified Facebook account. “Look, I was rooting for her – the dialogue is a joke. You could drive a truck through the plot gaps. The ending is poorly written. This movie should win a Razzie, not an Oscar.”

In a subsequent reply, Brittain added that “What the audience deserved – and what I wanted – was a scene where none of the film’s villains survived.”

In many cases, the criticism of a film—or the discourse that might follow as others pushed back—might not get far beyond the comments of that particular post; the ideology of “don’t read the comments” is also prevalent. But soon, many of the commenters took to his replies to highlight what they saw as hypocrisy.

Other commenters provided additional context to Brittain, who in recent years has run for Arizona senate as a far-right candidate. In 2018, the Phoenix New Times reported on Brittain’s Twitter account, where he complained he was being shadowbanned because he didn’t have a verified Twitter account, and highlighted previous racist messages Brittain appeared to have sent. Britain’s account was suspended in March 2018 for sharing conspiracy theories around the Parkland shooting, which resulted in Brittain suing Twitter to get his account restored. When Brittain tried to run again in the 2020 Arizona Senate election, he made headlines for sending racists texts to a business owner.

In response to hundreds of people dragging him for his past, Brittain took people focusing on personal attacks or his politics as proof that he was right. That assertion isn’t true; commenters also dragged Brittain for his opinions on Promising Young Woman.

“I like that people didn’t actually read what I said and just got angry rather than attempting to defend the film’s errors, they just blamed all of it on me, because insulting me is more interesting than the film was,” he wrote. Brittain doesn’t believe that critiquing a film should have anything to do with your politics, that people are only saying they liked the film because “politics are involved,” and he thinks that the audience deserved to see all of the film’s villains die by the end of the film.