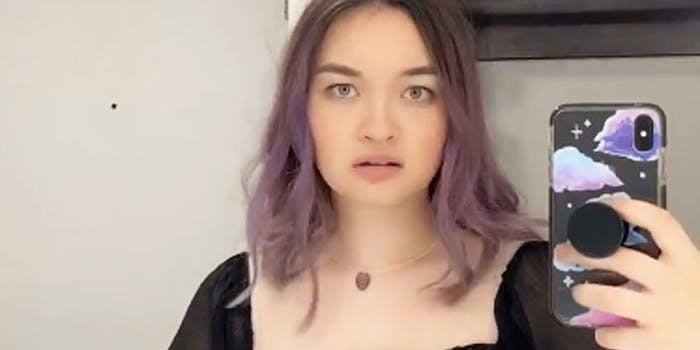 You're good enough, you're smart enough, and gosh darn it, people like you!

You may be familiar with Maia (also known by her online handle “mxmtoon”), the up-and-coming 19-year-old recording artist who recently released her debut album the masquerade back in September. The first single of the album, the ethereally gloomy pop track “Prom Dress,” became a near-instant hit, with the YouTube video amassing over six million views to date. And now, it’s become a sensation on TikTok—with a little help from Lil Jon.

“@mxmtoon I really hope this actually makes you laugh and you don’t hate me for it,” he captioned the clip, in which his mood appears to improve by the end.

And it didn’t take long for Maia to notice. Just one day later, the singer-songwriter uploaded her own video to TikTok using the remixed “Prom Dress” track. “Thanks for the audio @mattsmixtape,” she wrote. In her version, Maia likewise transforms from unsure to exuberant by the conclusion of the short clip.

Eventually, others began sharing their own uploads set to the “Prom Dress,” which typically demonstrated the users receiving surprisingly positive reactions to serious news or insecurities. On Nov. 17, user @hayleybabbyofficial uploaded a version in which her boyfriend saw her for the first time without makeup and still loved her, facial scars and all.

Shortly after, user @arden_tayler shared an iteration of the “Prom Dress” TikTok in which she recalled telling her then-boyfriend of three months that she was pregnant at 19 years old. (Complete with a happy ending!)

The format has since gone viral (with over 22,000 uploads and counting) as others shared their own versions of the “Prom Dress” TikTok—involving everything from revealing heavy news to parents to overcoming insecurities and being accepted by peers and significant others.

You’d have to think Maia would only be pleased by the way “Prom Dress” is being interpreted by her young fans. “My album, the masquerade, is about my journey of growing up! About learning who I am, who I want to be, and the challengers along the way,” she said of her debut.

“But it’s not just for me, its also for you. The stories told are universal experiences, so listen along and find yourself within the lyrics.”