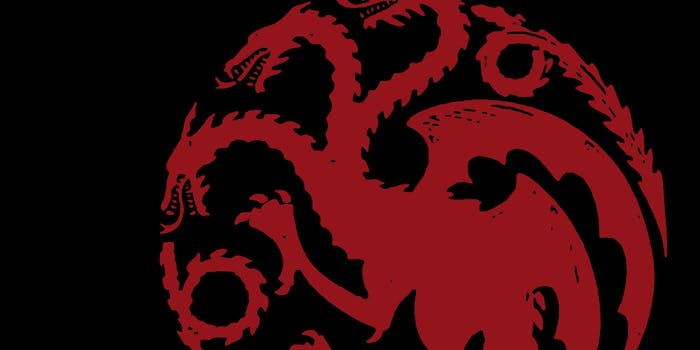 In other news, White Walkers are invading the campus of Bergen Community College.

A popular professor at Bergen Community College was suspended after he posted a picture of his daughter wearing a Game of Thrones T-shirt on Google+.

Francis Schmidt, who teaches art and animation at the community college in New Jersey, posted the photo of his daughter on Google+ on Jan. 12. She’s wearing a large shirt, one big enough for her to sit in, with a famous line from Daenerys Targaryen, whose goal is to take the throne she believes belongs to her: “I will take what is mine with fire and blood.”

Many people in Schmidt’s circle saw the photo, but one of them felt that the photo was a threat.

Schmidt was called in by Bergen Community College executive director for human resources Jim Miller over the photo to meet with him and other administrators over what Miller called the “threatening email.”

He was then placed on administrative leave without pay and would have to pass a psychiatric evaluation, one he says he passed before in 2007, before he was allowed to return to work.

Schmidt feels that he is being targeted by Bergen for filing a grievance after he was passed by the college for a sabbatical. The faculty at Bergen is also in the middle of a conflict with the administration. Bergen Community College President Kaye Walter supported the decision and didn’t think the college acted unfairly.

“The referenced incident refers to a private personal matter at Bergen Community College. Since January 1, 2014, 34 incidents of school shootings have occurred in the United States. In following its safety and security procedures, the college investigates all situations where a member of its community—students, faculty, staff or local residents—expresses a safety or security concern.”