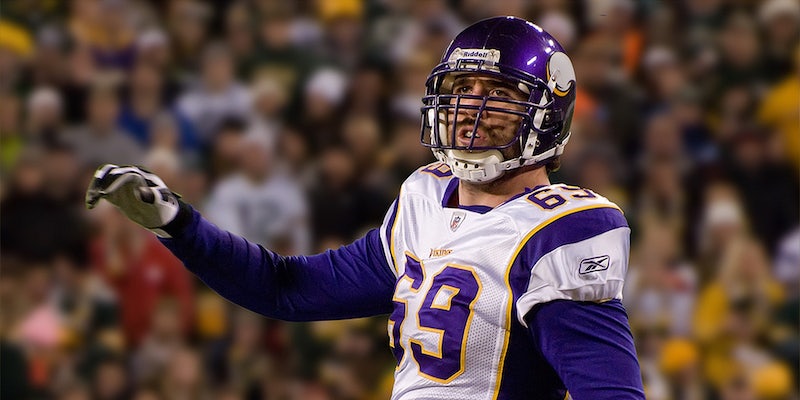 It's time to cut off America's biggest welfare queens.

For decades, conservatives have branded NASA as an ambitious waste of government money, more for the benefit of eggheaded scientist than the American public. Even during the Apollo missions, critics complained the moon landing was an expensive symbolic victory at the expense of government services and infrastructure. This is despite the relatively small size of NASA’s federal allotment, representing just 0.5 percent of the national budget.

But in fact, this week’s New Horizons mission—which provided the Internet’s closest look at Pluto yet—costs significantly less than the new $1 billion stadium for the Minnesota Vikings. This hasn’t escaped notice on Twitter.

It cost $700 million to reach Pluto. Which seems huge until you realize the new Vikings stadium is costing us $1 billion. #wrongpriorities

Can we send the Vikings to Pluto https://t.co/dAsOpPUTrQ

When one considers the regular cuts made to NASA’s programs—the first thing to go in an economic downturn—it’s actually amazing that professional sports exist at all. Although it’s easy to see giant organizations like the NFL or the NBA as profiteering behemoths, most major sporting leagues are a major drag on government spending that take more than they give to the cities that support them.

Big public works projects in support of professional sports, like that massive Vikings stadium, typically come with the assumption of increased revenue for the city and an influx of jobs. According to the advisory firm Convention, Sports, & Leisure, $4.7 billion in taxpayer dollars has been spent on 20 new NFL stadiums since 1997 alone. For that new Vikings stadium, the cash-strapped Minneapolis city government gave the NFL team $506 million in government funding.

What’s more, all of the money cities and counties give to these teams are tax-free, meaning not even the federal government sees that money again.

Most major sporting leagues are a major drag on government spending that take more than they give to the cities that support them.

It’s an incredible subsidy of what is functionally a useless city entity. A Brookings Institution report from the start of the current boom in sports funding found that new stadiums and teams had little—and sometimes even negative—economic effect on the cities that fund them.

They rarely attract tourism, with Holy Cross University economist Victor Matheson estimating that only 20 percent of attendees at a typical Major League Baseball game are out-of-towners. The money spent by attendees is simply the city putting money back into itself; stadiums and professional sports generate little new revenue, despite their massive initial cost.

While teams often promise they’ll put money back into the community, it rarely compares to what locals had to pay in the first place. According to a Kansas City Federal Reserve Bank study from 2001, new football and baseball stadiums cost taxpayers on average $188 million each, even though they generate just $40 million.

Some teams are even worse at paying back what they’ve been given. The Seattle Seahawks, for example, were given $390 million in public funding for CenturyLink Field. They only pay back $1 million a year.

One of the ways cities get trapped into these schemes is the structure of the “loans” teams accept for the stadiums. Contracts for the money are typically under a 30- or 40-year term, meaning that teams have that long to pay off the loan before a city can force them to default. While city budgets are renegotiated every year—forcing teachers, police, and social workers to fight for funding year-to-year—enormously profitable football teams are guaranteed a fair loan rate for decade.

This would be a sweet deal for any entity, but it’s especially so for some of the most profitable businesses in the entertainment sector. Many of the richest people in the United States are owners and operators of professional sports teams, and NFL teams make enormous sums of money. The most valuable teams can even pull twice in revenue what they annually spend in operating costs.

New football and baseball stadiums cost taxpayers on average $188 million each, even though they generate just $40 million.

And this is far from dependent upon their service to the city or even as a sports team. The National Football League is actually a nonprofit that evenly distributes revenue to its teams, regardless of their win-loss record or societal benefit. Earlier this year, the Atlantic called the NFL “America’s Socialist Sports League.”

When taken into consideration as a public expense, professional sports teams seem more like an extravagant expenditure for struggling American cities. Detroit has suffered enormous economic embarrassments since filing for bankruptcy in 2013—yet offered $286 million for a new stadium for the Red Wings that same year. The Eagles announced a $125 million renovation project for Lincoln Financial Field, even as Philadelphia struggles to keep schools and police precincts open.

How then do sports teams continue to avoid financial scrutiny—given their massive costs and few benefits to the communities around them?

At this point, America’s sports-industrial complex feels too big to fail, especially considering the inordinate amount it costs to attend a game—let alone advertise during one. A typical NFL ticket costs $85, and primetime sports games are famously some of the most expensive advertising slots on television. Last Super Bowl set records with companies shelling out an unwieldy $4.5 million for just 30 seconds of airtime. All that money has to be spent on something, right?

Despite multiple studies finding that most NFL teams could actually afford to build stadiums without funding from the public, the teams themselves have little incentive to turn down taxpayer dollars. It’s basically free money, requiring little commitment to improve the city—or even pay much of it back any time soon.

When compared to the constant complaints you hear about the financial cost of NASA’s enormous, Internet-breaking accomplishments, one can’t help but wonder if the interest isn’t really in saving any money but proving the nerds aren’t as valuable as the jocks.

Photo via MikeMorbeck/Flickr (CC BY SA 2.0)