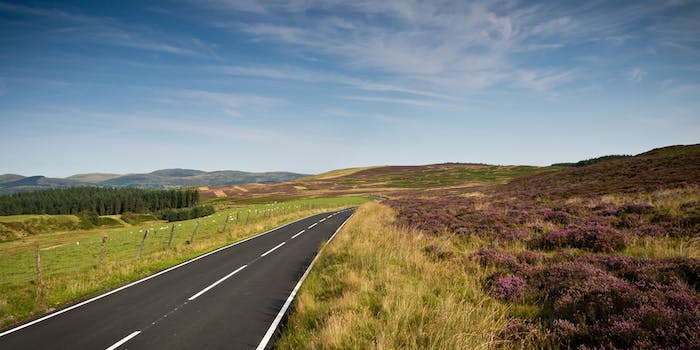 Is this Google as kindly chauffeur or Google as The Man?

I spend a lot of my life driving. Splitting time between Fort Bragg and the East Bay means that I often spend at least one day a week making the drive from one place to the other, in addition to the driving I do to get around when I’m at Home 1.0 or Home 2.0. I don’t put ridiculous amounts of mileage on my car, but I put on a fair amount—and more than that, I like driving. I like the curvy, beautiful roads that lead me from one home to another, the sense of peace I get while driving, the way I use it to process things I need to think about and address but might be feeling overwhelmed by in the world outside the bubble of my car.

As a frequent driver, I have to say that Google‘s recently unveiled self-driving car is, on the surface, a cool idea. There’s something sort of appealing about it—especially when I’m, say, picking someone up at the airport at 12:30am after working all day with the knowledge that I need to get up at 7am to talk with someone on the East Coast. Or for those times when I want to just zone out, or not deal with traffic, which tends to make me extremely, well, annoyed.

The cars have the potential to help people avoid cyclists (big bonus, and a growing issue in many necks of the woods, including my own) and could make driving safer and more efficient, a big concern in urban areas.

On purely utilitarian grounds, I should love the idea—after all, there’s a reason self-driving and driverless cars are extremely popular in science fiction. They seem like an obvious next step for society, allowing us to outsource mundane tasks to robots. Whether we should be driving at all is a larger question, and I’d frankly rather see these resources being dedicated to improving public transit, but if we are going to drive, it makes sense to make it safer and more efficient.

That said, though, I’m not sure I want Google driving my car. Google drives so much of my life already, and it’s a company with deeply Orwellian overtones. My email, my search, my calendar, and so much more of my life is mediated through Google’s lens, and the company controls what I see, when, and how. When I search, Google bases results on my perceived location, past searches, and other records it gathers about me. Google has compiled vast amounts of information about me, and their privacy culture isn’t necessarily optimal, as illustrated by the fact that they have an irritating tendency to promote opt-out privacy measures rather than opt-in ones; Google Buzz was perhaps the most outstanding example, but now Google is pressuring users to sign up for Google+ to access and use services, to use “real names” on YouTube, and more.

Would I want Google knowing where I’m driving and when? How is the security of that information being controlled? Could an abusive partner or harasser figure out where I’m going, where I live, or other key information on the basis of my Google Car records? How readily would Google release information about my driving history to law enforcement? I also have the same concerns about California’s proposed RFID-linked registration fee system, in which drivers would be subject to a pay-as-you-go system; a good idea in theory, but one that involves trusting the state with information about where my car is at all times.

Do I want passing police officers to be able to externally scan my car to collect information about me and use it to profile me? These are the questions California drivers may be facing in the very near future, and they apply to the Google Cars, as well. The long tradition in America of valuing privacy and a freedom of movement is already under increasing restrictions, and it’s getting worse through measures like these, as the devices we carry spy on us and carry the records with them, waiting to tattle.

Google just revealed a prototype for a driverless car, which seems like the natural next iteration of their self-driving cars. In this case, though, the problem is even more acute, as the driver has no control and can’t even take over manually, turning the system off. Is this Google as kindly chauffeur or Google as The Man?

Both cars are also plagued with another problem: The need to know the road. While Google’s cars are mapping and learning more and more of the streets in areas around Palo Alto and Mountain View, and steadily expanding elsewhere, their ability to navigate is dependent on Google Maps data and hand-harvested data from the street. This means that Google Cars would be largely useless to people who travel in remote, unmapped areas, and they could be hugely problematic during roadwork and in other changes.

I am reminded, for example, of the Google Lady’s vigorous reminders to “return to route!” when I drove on the new east span of the Bay Bridge for the first few months, because Maps hadn’t been updated and she thought I was driving in the Bay. While my Google Car’s camera could help me not drive over the side of a bridge (I hope), would it pick up on the fact that lanes had been changed due to construction? Or that exits had moved to accommodate building projects?

Concerns about privacy, level of control, and logistical applications aside, I have another, more selfish reason that I’m not a huge fan of Google’s self-driving cars: I like driving too much to surrender power to other people, let alone robots. I enjoy pushing my limits and those of my car as I traverse the windy, tree-lined roads to home. I like focusing and re-centering myself as I navigate California’s woefully undermaintained freeways. All these years later, when I get into a car and turn the key, I still feel like I did on the day I got my license and got to drive my own car for the very first time. Is this going to become an experience like cassettes, one that will feel totally alien to the next generation?

Photo via ShotHotspot.com/Flickr (CC BY 2.0)