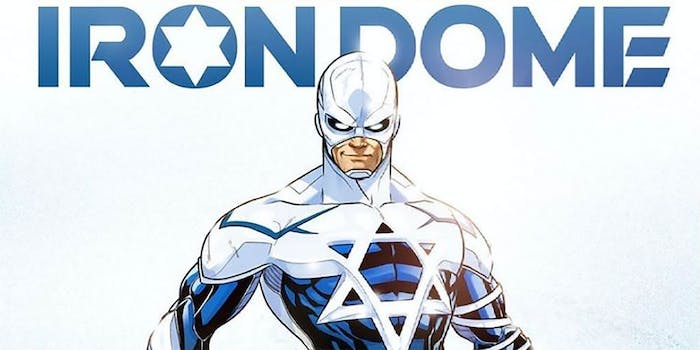 'The face of someone about to bomb a hospital.'

A group touting itself as an “international and non-partisan Israel education organization” has taken to Twitter to share a rendering of Iron Dome, an imagined pro-Israel superhero named for that country’s missile defense system.

The Sunday morning tweet from StandWithUs—a Los Angeles-based right-wing organization that has recently been opining about the Israel-Palestine conflict, celebrated Iron Dome. “Introducing, a new Israeli superhero,” the tweet said, framing the text with Israeli flag emojis. “Iron Dome, the protector/defender of Israel. We love it!”

The Instagram post expressed a desire to help explain elements of war to her children—particularly the booming sounds they heard during recent skirmishes involving Israel and Palestinian militant group Hamas. She then remembered the movie Life is Beautiful and aimed to take a similar tactic in dispelling fear through storytelling.

“So I told the kids that we have a superhero named Iron Dome,” she noted, “who guards us and intercepts the missiles of the bad guys in the air so every time they hear a boom he actually managed to intercept them and then their smiles came back.”

Her post, crediting artist Yehuda Devir for the Iron Dome rendering, concludes, “We hope that @irondome10,” linking to a private Instagram account bearing the fictional hero’s name and likeness, “will be a symbol of strength, victory and heroism for all the children of Israel.”

As the Wall Street Journal explained in a recent video posted to YouTube, the Iron Dome defense missile system “is designed to intercept and destroy short-range rockets and mortars.” The text accompanying the YouTube video noted, “During the recent conflict, it has been used to destroy more than 200 rockets bound for Israeli cities.”

Casting Iron Dome as a superhero led to some cynical reactions on Twitter.

Dan O’Sullivan tweeted, “I’m sorry: ‘Don’t know’ or ‘neutral’ isn’t an option on this question. For the question, ‘Is this a sign of a society becoming fascist?’ you have to put ‘very much,’ ‘somewhat.’ ‘a little,’ or ‘not at all.’

Rajat Suresh imagined Iron Dome in this way: “That avengers assemble scene where they’re coming out of their portals but it’s a bunch of these guys and they’re going up against a 12 year old with a rock.”

Another critic zoomed in on Iron Dome’s face and remarked, “The face of someone about to bomb a hospital.”

The post also caught the attention of Russian news agency RT, which published an article characterizing Iron Dome as “a smirking flying superhero who reminds critics of supremacist villains.”

Just an hour before tweeting out the Iron Dome rendering, StandWithUs lauded Real Time host Bill Maher for his May 28 barb directed at Bella Hadid’s pro-Palestine comments, saying, “Thank you for standing with Israel, Bill!”