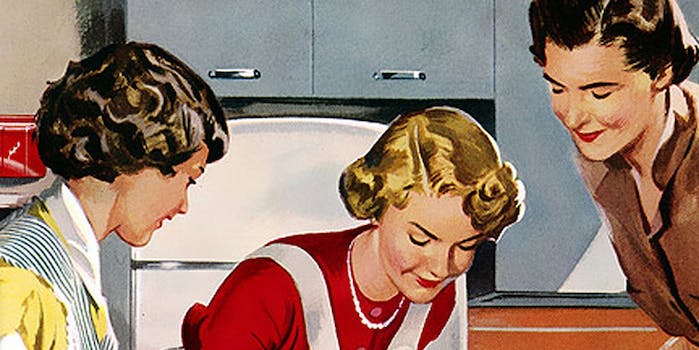 Didn’t you hear? Patriarchy is the new black. Sexism is vintage.

Susan Patton, the infamous Princeton Mom, is at it again. First, she urged female Princeton students to devote the majority of their college careers to landing a husband. Now, she’s appearing on Fox & Friends to decry the damage done by feminism and to share her hot tips for “keeping husbands happy.”

Her sage advice for straight, married women? Be nice, respect your husband, and always remember that “this is the man you married,” even when you’re tempted to nag him. Don’t listen to the “antagonistic feminists” who have “overcorrected” for the obstacles that women faced in times of old, Patton advises, be the sweet domestic goddess of his dreams instead!

Susan Patton’s marriage counsel is so old that she can almost get away with passing it off as young, hip, and edgy in that coyly reactionary counter-cultural sort of way. Didn’t you hear? Patriarchy is the new black. Sexism is vintage. Let’s all put on poodle skirts and bake pies for our hubbies, it’ll just be the bee’s knees, gosh golly.

But not only is Patton’s relationship advice hilariously outdated, her media strategy also proves that she’s laughably out of touch with the core demographic she’s seeking to influence: young, college-educated women. If Patton wants to seduce women into marriage, she’s using the wrong platforms to do it.

Thus far in her fifteen minutes of fame, Patton has penned a letter to the editor of Princeton’s college newspaper, The Princetonian; a timely Valentine’s Day op-ed for the Wall Street Journal; and a book entitled Marry Smart. She’s currently making a slate of talk show appearances for her book tour, hence the now-notorious Fox & Friends interview.

Patton’s means of communication are as staid and traditional as her views on marriage. Her marital evangelicalism takes place in spheres so far removed from the audience she is ostensibly trying to persuade that she’s essentially shouting into a void. These days, public opinion rises and falls with the Internet. And trust me, the Internet hates Susan Patton.

Patton has already picked a losing battle: a smaller percentage of American adults are getting married than ever before. According to a recent study by Pew, only about a quarter of Americans between 18 and 32 are married as opposed to the nearly half of baby boomers (i.e. Susan Patton’s generation) who were married at that age. Kudos to Patton, then, for attempting to single-handedly reverse a major social trend. She’s ambitious, at least.

But Pew also notes that young Americans “have become less attached to political and religious institutions” while becoming more attached to the Internet and social media. This is bad news for Patton who is, it would seem, currently attempting to promote marriage, arguably the most religious of American institutions, via political institutions like Fox News.

Not only did Patton pick a losing battle, she also brought the wrong weapons to the fight. Patton’s hapless attempts to persuade young women are about as effective as texting someone from a rotary phone.

The young Americans that Patton wants to prod toward the altar certainly aren’t watching her interview on a network with a median viewer age of 68; they’re laughing at her via a .gif from The Daily Show in which Jon Stewart asks her what century she thinks she’s in. Young women aren’t casually browsing The Wall Street Journal only to happen on Patton’s good advice; they’re laughing at the idea that anyone still reads The Wall Street Journal. As one Tumblr user notes, “What on Earth? Did somebody fall prey to an uncaught Y2K bug?”

And lest we believe that a bona-fide publication like The Wall Street Journal carries more clout than the oft-derided denizens of Tumblr, we should note that Tumblr’s popularity is on the rise with the youngest demographic of Internet users, particularly with the educated, urban demographic that Patton so desperately wants to marry off.

Her brand new book won’t fare well with the Internet generation either. Between reactionary conservatives who latch onto it and people who read it out of morbid curiosity, it may cobble together enough sales for Patton to have her day in the sun.

With limited information available to them, baby boomers like Patton might have bought books based on their titles and covers—”Ooh! A book called Marry Smart! I want to get married, let’s give it a try”—but digital babies will likely check the Amazon customer rating first. Marry Smart is currently hovering at a failing grade of two and a half stars.

Patton (and especially her agent) must know that the social impact of her writing is minimal, that she may as well be putting messages in bottles and sending them out to sea. At this point, her media blitz isn’t an earnest attempt to change hearts and minds; she just wants to shout as loudly as possible from the deck of her sinking baby boomer ship.

Worse still, Susan Patton has reduced herself to a form of entertainment for Fox News-watching retirees who get off on a feeling of moral superiority over corruptible youth. Her voice will never be able to carry in the digitally-mediated spaces in which young people currently interact.

So if Patton really wants to talk about marriage with young coeds, she should make a Tumblr account. I hear princetonmom.tumblr.com is still available.

Photo via Sport Suburban/Flickr (CC BY 2.0)