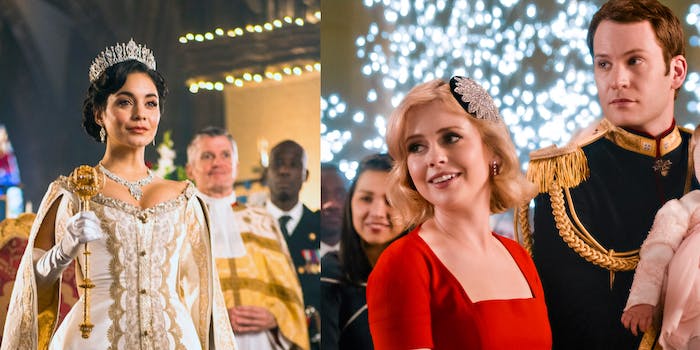 Wait, what is going on in this film universe?

Netflix’s The Princess Switch: Switched Again, its sequel to the 2018 film starring Vanessa Hudgens as two different people who happen to look exactly alike and switch places, introduces a third lookalike character. Yes, Hudgens plays three different characters and pulls it off surprisingly well. But it’s a surprise cameo from characters that exist in a different Netflix Christmas film series that is causing people to do a double-take. (Warning: spoilers ahead!)

At the end of Princess Switch 2 (as the film will be referred to in the rest of this article), we see the audience at Queen Margaret Delacourt’s coronation. The camera quickly pans to the Queen and King of Aldovia, Amber and Richard (Rose McIver and Ben Lamb), and their baby girl—characters from Netflix’s A Christmas Prince trilogy. (The caption on the Netflix media photo of this scene confirms that it is indeed the Christmas Prince characters.) The crossover of characters from multiple Netflix Christmas films got people excited about a multiverse like the MCU, but it was also very confusing.

Looks like we just figured out the plot for the next Princess Switch film. With four Vanessa Hudgens, there are a whole lot of switching opportunities.