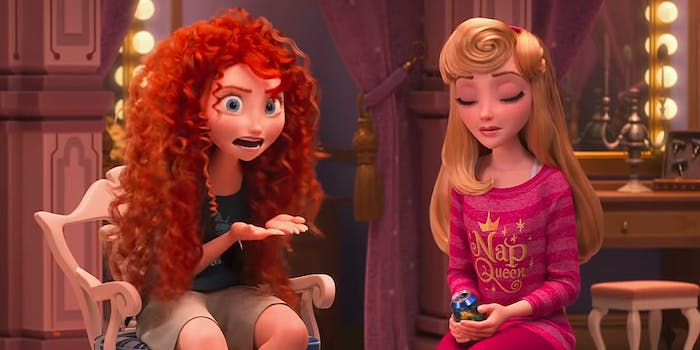 It's so brave of Merida to tell us how she really feels.

The Scottish Disney princess Merida is one of the most unique characters to join the princess clique. Her shock of curly red hair, her courage, and most of all her sassy mouth have made her a favorite among fans of the 2012 CG movie Brave.

Well, Merida’s back once again in Disney and Pixar’s latest creation Wreck-It Ralph 2: Ralph Breaks the Internet, in a scene that gathers some of the most iconic Disney princesses for some much-needed “real” interactions where they hang out and just, well, have some girl talk. Faves like Aurora, Snow White, Mulan, Anna, Pocahontas, Ariel, Tiana, Moana and Ralph’s pal Vanellope herself can be seen lounging around telling tales. She’s a princess too now, you know, so she’s part of the club.

Ever since this trailer debuted, people began gravitating toward one part of the trailer in particular, where Merida goes off on a rant.

None of the princesses actually know what poor Merida is saying, due to her thick Scottish accent, which is adorable and amazing. Here’s what she’s actually saying without accents for good measure:

“I give my mom a cake, she turned into a big bear, and my own dad tries to do her in. If that’s not a pure mess, I don’t know what is.”

Okay, she’s a little hard to understand, sure, but there we have it—it’s essentially the plot for the movie Brave. Simple, right? As expected, people online are taking that now-iconic scene and repurposing it for some hilarious (and often vulgar) rants using the same Scottish dialect. Most of them aren’t quite sure what she said in the first place, either.

The verdict? There are some true gems in this new wave of memes.

Why dae folk ask babies stupid shit lit "Ur gettin big arent ye?" As if the wee cunts gony be like "aye Moira yer spot on am oan the protein" pic.twitter.com/HavrQVM2aG

"Ye ever wanty just wrap yersel up in tin foil nice and cosy and then just fucking get right inty the microwave and blow yersel up tae fuck" pic.twitter.com/z4OLPre3wj

Of course, many of these jokes are cribbed from so-called “Scottish Twitter,” but that doesn’t stop them from being ridiculously funny.

"Mum just had a go at me for 'using too much toilet roll', well I'll just leave my arse caked in shite to save you £1.50 you absolute weapon." https://t.co/Yq2oDaORZ2

“Whit is it wae the auld yins who think they can cut in line when you’ve been waiting on the bus for an hour in baw changing weather but they show up and cut in front, yer auld, no dieing, just cause he got that fancy pass you think you can cut me, naw” pic.twitter.com/wyJmkwkrjl

Yeah, Merida certainly isn’t saying that in the trailer, but we could definitely see her going off on some of these tangents (without the language) in that magnificent accent of hers.

Raise your hand if you figure we can cut all the Ralph parts and just have a movie about Disney Princess Pajama Party with Merida doing Scottish Twitter and everyone else being written by women and hilarious?