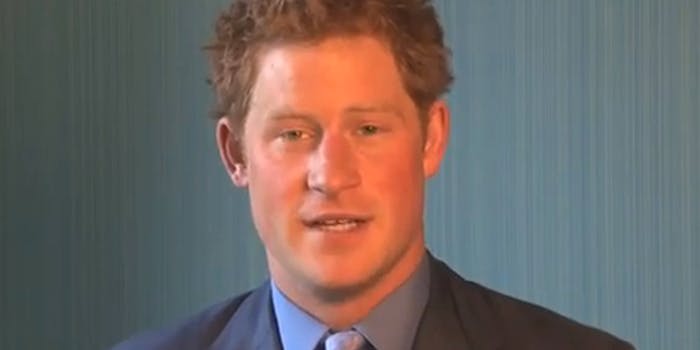 The royal was apparently using Facebook under the alias "Spike Wells," and had around 400 friends.

The British Army member and accomplished strip pool player who’s third in line for the throne used Facebook under the alias ‘Spike Wells,’ but royal watchers noted that Harry has recently shuttered his page. The account was protected with many privacy controls and he’s been an active user for more than four years with more than 400 friends.

The royal troublemaker is said to be “terrified” of the other pictures that could be found on his account, thus forcing him to delete the account. Prince Harry is no doubt relieved that Facebook recently announced they will remove users’ deleted photos from their servers within 30 days.

Meanwhile, details of Harry’s highly guarded profile have been leaking out to the gossip-fueled U.K. tabloids. Hello! magazine notes that when Harry was in Las Vegas, he changed his profile picture to that of three men, one of which looked like Harry, standing in front if a large television in a suite that looked similar to the MGM Grand, where he was staying.

The magazine also writes that Spike’s (rather, Harry’s) profile has recently posted pictures of his former girlfriend Chelsy Davy and listed his hometown as Maun, Botswana, where he and his girlfriend traveled.

Two close friends of Harry’s have also deleted their Facebook accounts. There were allegedly even wilder pictures of the prince’s escapades in the British Virgin Islands, prior to his Las Vegas trip, posted on their now-deleted accounts.

Maintaining a Facebook page is deemed a “security risk” for someone as famous as Harry, according to Dai Davies, a former Scotland Yard official.

“From a security point of view I would never recommend anyone high-profile to have a Facebook account because, depending what you have on it, it is indicative sometimes of where you are going, what you are doing, and more importantly, who your friends are” said Davies to a UK newspaper.

Maybe Harry should’ve maintained a Myspace page. No one would have thought to look there.