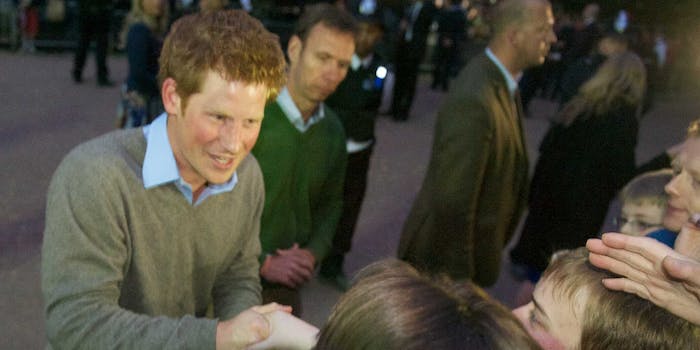 A gentle reminder that no royal in the history of ever has actually needed money wired to them from Internet strangers.

At this point, it’s fairly common knowledge that those emails from Nigerian princes with difficult cash flow situations are completely bogus. But now that the trick of posing as an African noble fallen on hard times is a well-known con, what’s a scammer to do? Stop ripping people off?

Nah. They just switched to a different set of royals: Con artists have managed to scam an Austrian man out of nearly $40,000 by posing as Prince Harry, the ginger he-devil in line for the British throne.

Using a fake Facebook profile, scammers convinced an Austrian workman that he’d been awarded a hefty contract to renovate the parquet floors at Buckingham Palace. Part of the fraudulent contract required the man to wire payments to several businesses. The Austrian transferred more than $38,000 before he realized something was amiss and contacted the police.

This isn’t the first time scammers have impersonated Prince Harry to bilk people. In 2010, at least 20 women in the U.S. were conned by someone posing as the younger Prince of Wales. For that swindle, at least one woman actually talked on the phone to someone she believed was the prince. The money was supposedly for a charity for African orphans.

In that scenario, the women wired the money to someone named Raji Abass Agboola, who deposited their would-be charitable contributions into accounts in Benin and Nigeria.

Perhaps the two cons are connected, though investigators in the Austrian case are doubtful they’ll recover the money.