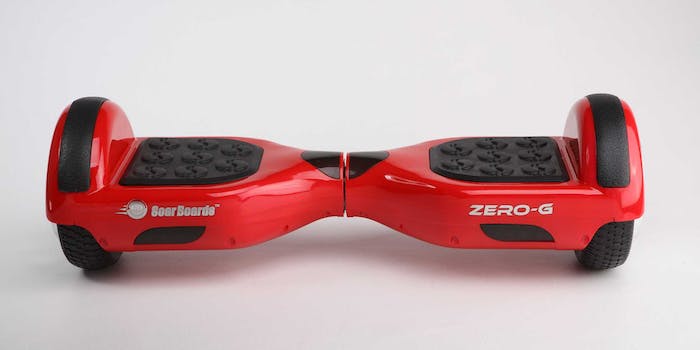 Priest suspended for riding a hoverboard during Christmas Mass

Talk about a holy roller.

Mike Tyson can’t stand up to its power, and its force makes a clown out of Darth Vader.

Hoverboards: they’re everywhere, literally exploding in popularity. But if you’re a man or woman of the cloth and you’re sermonizing or singing from a hoverboard during your church service, don’t be surprised if your bosses punish you.

The Diocese of San Pablo in the Philippines has announced that a priest who used a hoverboard during mass on Christmas Eve “will be out of the parish and will spend some time to reflect on this past event.”

That’s right. A priest on a hoverboard during Christmas Mass. Here’s how the unidentified priest rolled on that night.

To be fair, the congregation seemed to enjoy the show, but the Diocese was not amused.

“That was wrong,” the Diocese of San Pablo said in a statement. “The Eucharist demands utmost respect and reverence. It is the Memorial of the Lord’s Sacrifice. It is the source and summit of Christian life … [Christmas Mass] is the Church’s highest form of worship. Consequently, it is not a personal celebration where one can capriciously introduce something to get the attention of the people.”

The priest apparently hopped on the hoverboard before the final blessing of the mass while singing a Christmas song. According to the Diocese, he has apologized.

“The priest said that it was a wakeup call for him,” the Diocese said. “He acknowledged that his action was not right and promised that it will not happen again.”

Still, score one for the coordinated priest. At least he didn’t tumble his way into one of these compilation videos. That really would have embarrassed the church.