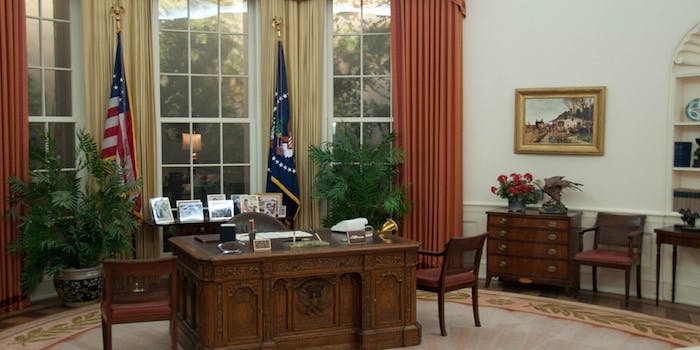 Every presidential candidate’s doppelgänger, according to face recognition software

Politics is all about appearances.

When it was announced that there would be another presidential election and that the country wasn’t becoming some type of constitutional republic monarchy that worships at the throne of Barack H. Obama while also holding true to some type of founding-fathers-based circle jerk, I knew something special was afoot. Every major election I’ve been even remotely cognizant of has held the type of drama better reserved for a soap opera crossed with the mystique and power players of a Real Housewives series.

America is a country that thrives on absolute overkill, and the 2016 election is no different. There are currently 22 candidates running for president. Even if you have no idea who the fuck half of them are, they actually care enough to throw down the cash and the paperwork to at least declare their intent. A majority of them veer to the right and there are so many Republican candidates that the first GOP debate had to be split in two.

I’m trying to bridge the gap, though. What better way to decide on who to vote for than the arbitrary algorithm of PicTriev, photo recognition software that not only guesses your doppelgängers but relative age and how masculine or feminine you look? This project includes all candidates from both sides, even if they’ve done like literally nothing but look really confused on a stage or talk about their childhood during their announcement speeches three months ago. Vote or die, or whatever. 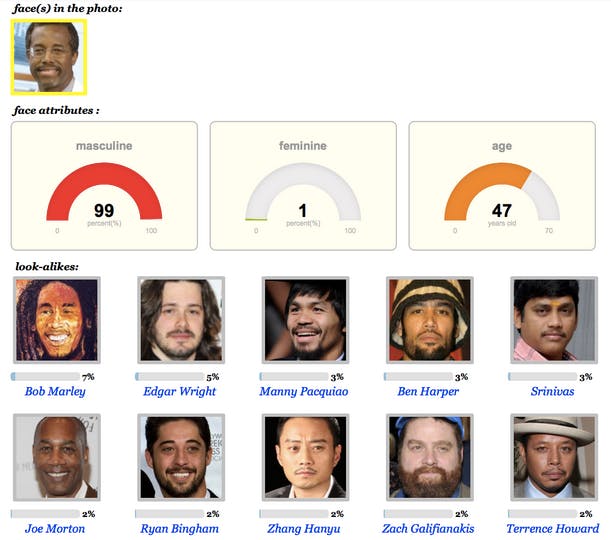 Ben Carson looks like he’s come straight out of a ’90s geometry textbook, sans ballpoint pen drawings of dicks and devil horns. If he can’t engage with hormonal high schoolers then I’m not really sure if he can lead the country. At least he resembles a stone etching of Bob Marley. Now that’s some street cred. 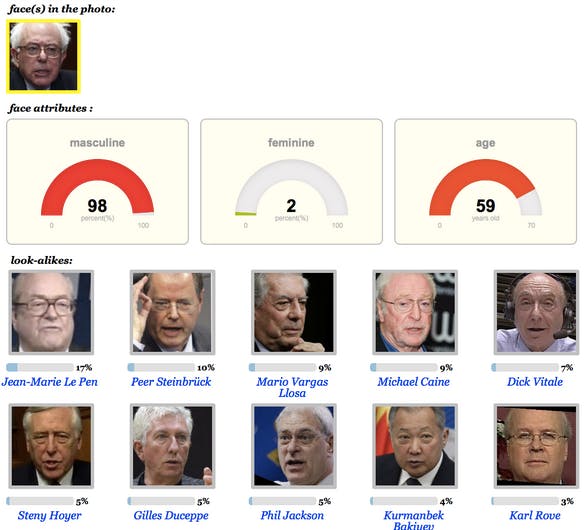 Bernie Sanders isn’t the only candidate to be compared to Karl Rove, but he’d certainly be the most pissy about it. The absolute variety in old white man lookalikes runs the gamut of revered NBA coaches and French politicians, which honestly encapsulates virtually no characteristics of Sanders as a person. He’s clearly a wildcard. Vote for him. 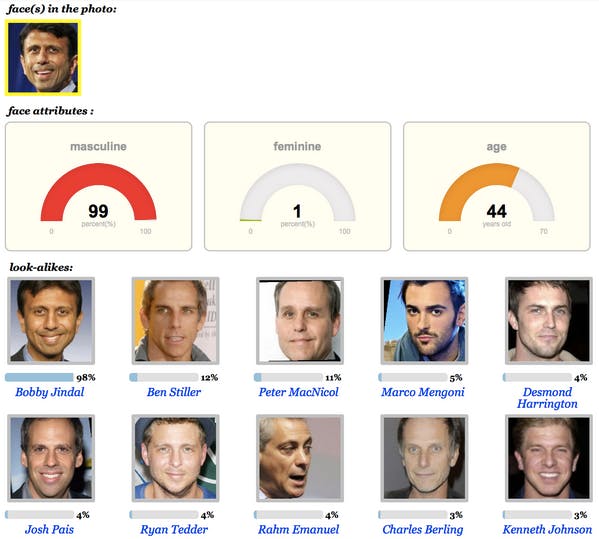 Surprise, surprise—Bobby Jindal is a dead ringer for Bobby Jindal. The distinct mug of this motherfucker may be the only defining feature of a candidate who’s more generically laughable and offensive than your drunk uncle recounting his wild time at the casino for ladies’ night at the old folk’s home. At least he’s a tiny bit feminine. 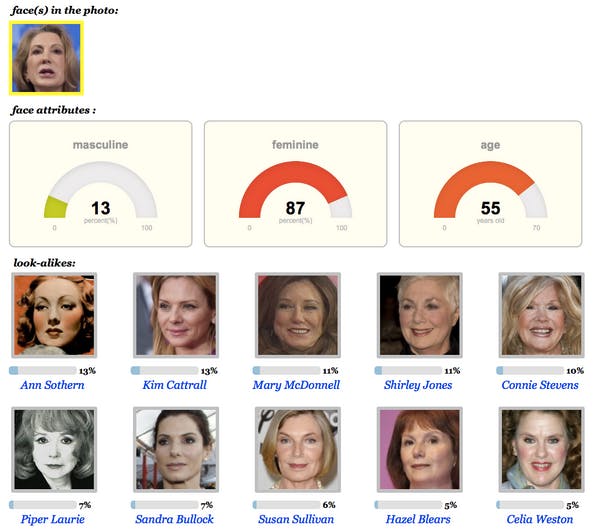 As far as I’m concerned, the only comparison that matters on this list is Carly Fiorina’s resemblance to Kim Cattrall, because Fiorina is so totally a Sam it’s unreal. Actually, I’ve only seen like three episodes of Sex and the City and was high as hell for two of them. (The other time, I had insomnia, which is sometimes like the same thing.) Judging by a cursory glance at Cattrall’s character’s Wikipedia page, she’s like the YOLO queen and fairly bipartisan. Representative quote: “I don’t believe in the Democratic party or the Republican party, I just believe in parties.” 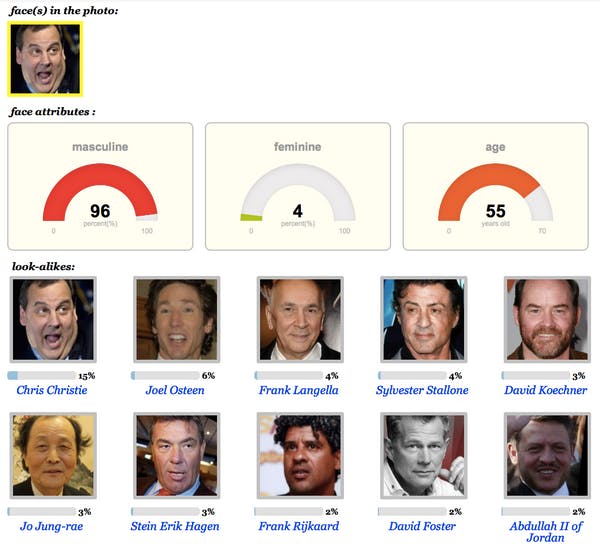 Thank god someone else was as into this derpy-ass photo of Chris Christie as I am. What a gem. Sadly, it calls into question the accuracy of a browser-based facial recognition device like PicTriev. How can the exact same photo of Chris Christie only constitute 15 percent of him? Is he really that overweight? Like, what are you trying to say, PicTriev? Stop size-shaming. 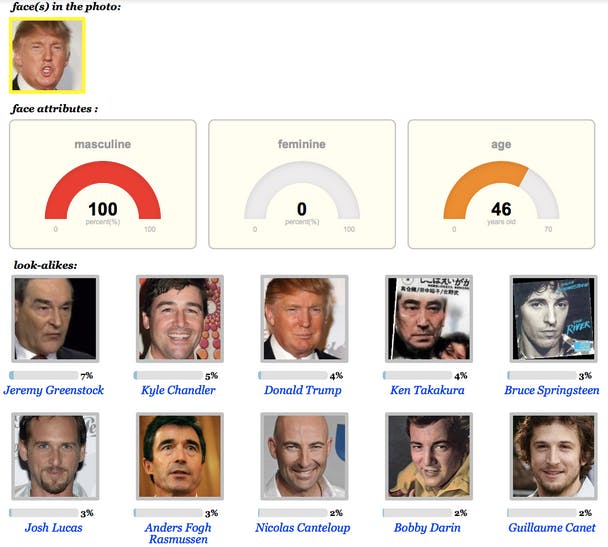 The fact that Donald Trump is considered 100 percent masculine leads me to believe he’s either got a stake in PicTriev or the company is so threatened by his ranting they’d rather just let any effigy remotely resembling the Donald stand as the manliest person to be run through its algorithm. That whole constitutional republic monarchy thing could very well become a reality with Trump at the helm. Fight the power, and don’t trust a man who looks like Bobby Darin and Bruce Springsteen at the same time, because that’s just a terrible mash-up. 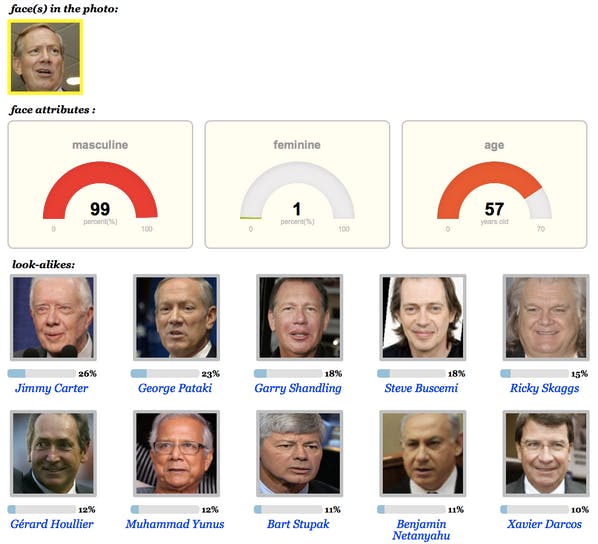 Holy shit, what happened to Ricky Skaggs! Anyway, in case you didn’t know, this guy is George Pataki, and he was either in Hey Arnold! as Helga’s brutish, beeper-toting dad or actually served as the governor of New York for a while. Does that make him qualified to run the country? I mean, look at the dignitaries he’s being compared to: Jimmy Carter, himself, Benjamin Netanyahu. Yeah, totally. Sure. 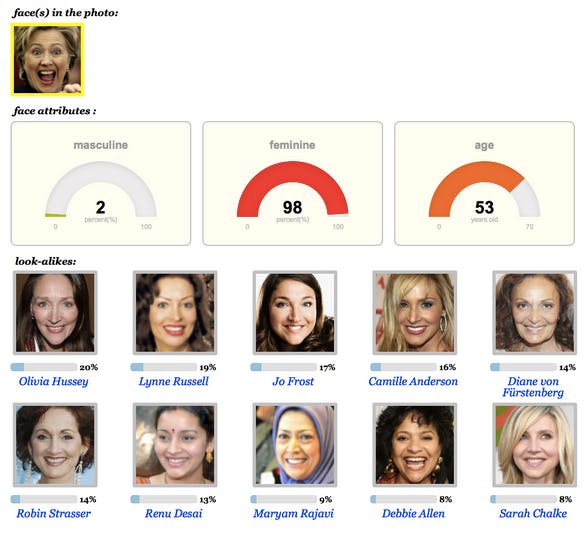 So I have no idea who half of these people are, much as with the current makeup of the 2016 presidential election. I guess Olivia Hussey is a highly revered actress and Lynne Russell is a CNN HLN personality/journalist—all things that probably perfectly reflect the character makeup of Hillary Clinton in the eighth dimension. In this dimension, Clinton’s a fairly solid candidate. Look how hype she is. 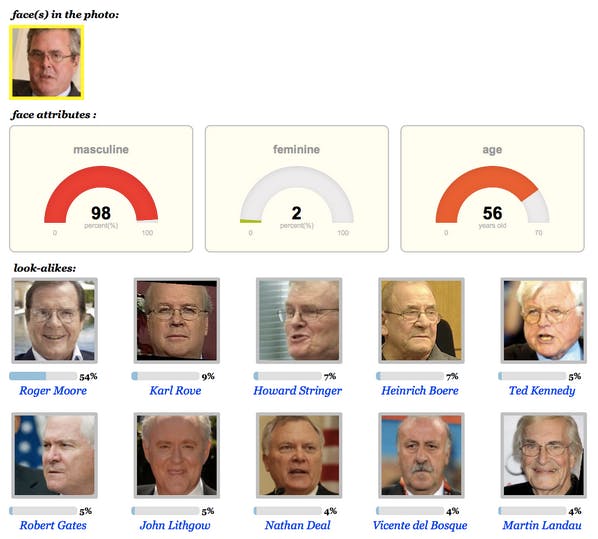 PICTRIEV, HOW DARE YOU. Roger Moore is my favorite Bond because I’m an old soul and probably have no taste in movies. Jeb Bush might be my favorite Bush because he uses an exclamation point after his first name, like action onomatopoeia from a goddamn Batman comic. And, really, didn’t Confucius always say: If you can be anyone, be Batman(’s sound effects when punching bad guys)? 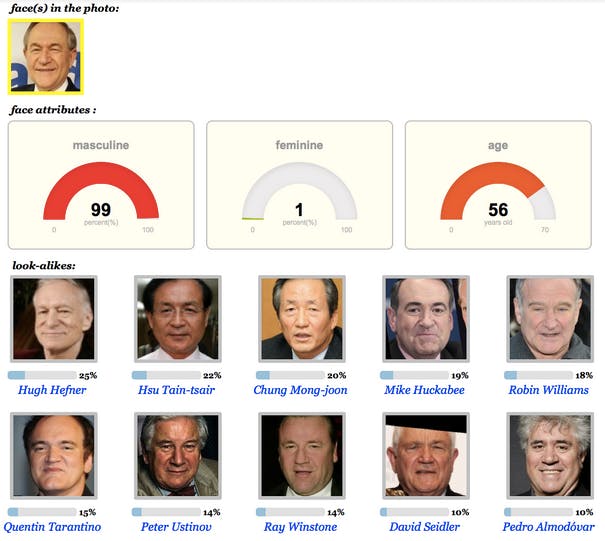 I mean, seriously, who the fuck is this guy. Oh, that’s right—Jim Gilmore. He’s a Republican, and used to be the governor of Virginia, and he seriously looks like he got that good illegal Virginia kush. Thizz face (look it up if you ain’t hyphy) aside, there’s pretty much nothing engaging about this dude. He’s certainly no Hugh Hefner, even though PicTriev is trying to make that happen. 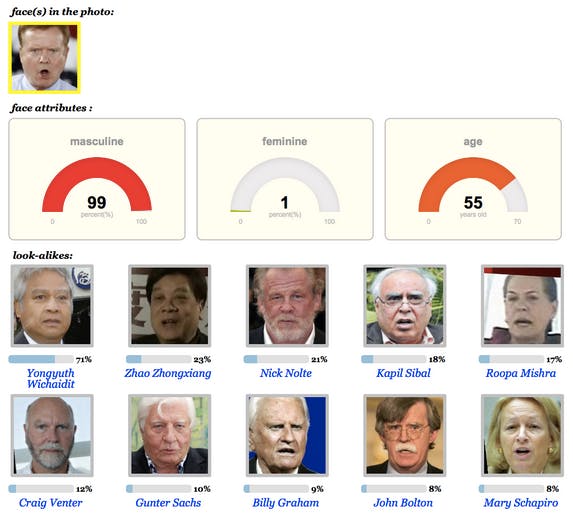 John Bolton’s mustache tho. Oh, and Jim Webb’s “O” face. For that very reason, damn near every Webb doppelganger looks like they’re either facing death or taking a massive shit. Proving that the state of Virginia apparently doesn’t have enough weed to go around, yet offers up more than enough presidential candidates, Webb stands as yet another Virginian seeking higher office. He’s currently a senator and, like, really into Andrew Jackson and standing on the wrong side of history, so maybe he’s more akin to Billy Graham than PicTriev gives him credit for. Just nine percent? Really? 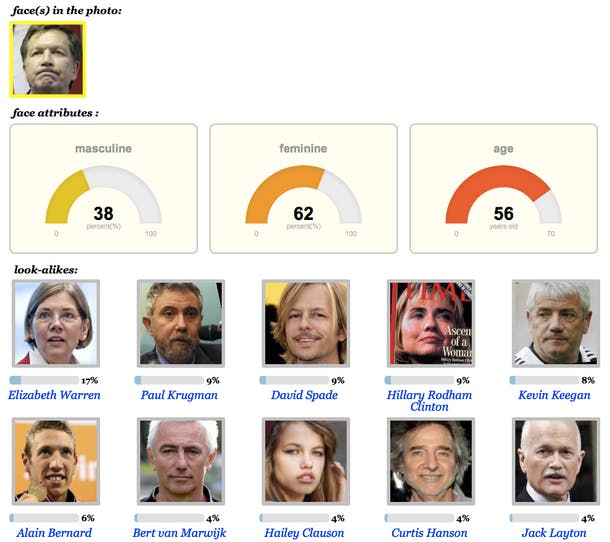 Who would’ve thought that John Kasich would be the most androgynous candidate, according to PicTriev? Dude contains gender multitudes, which is honestly pretty cool if that’s the platform he ends up running on. Kasich is a Republican, though, and hails from Ohio, so that doesn’t exactly bode well for him coming out as genderfluid and actually being legit. His political lookalikes are so far removed from Kasich’s actual policies, it’s laughable. Even the Paul Krugman comparison is a head-scratcher. 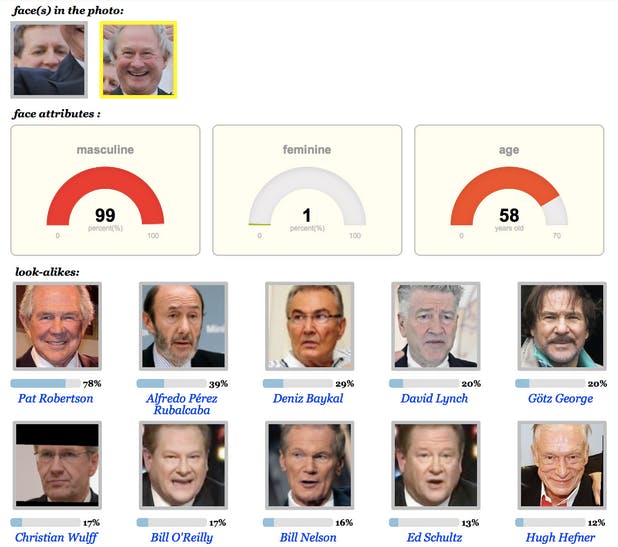 Why is Bill O’Reilly’s photo a photo of Ed Schultz? Better yet, why is David Lynch in such psychic crisis? As an aside, Lincoln Chafee was the first Pic I ever Triev’d, showcasing the website’s innate ability to recognize faces even in crowds. Just look at the first creeper staring down the backside of Chafee’s head like a particularly juicy steak. Pieces of meat are highly electable. 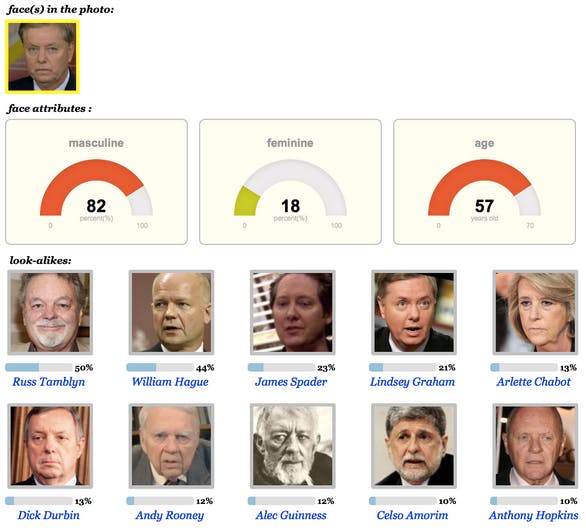 Smile with your eyes, Lindsey Graham. Please. The only person to do so on the comparisons list is Russ Tamblyn, who must’ve been on that good, good Virginia shit with Jim Gilmore while portraying Dr. Lawrence Jacoby in Twin Peaks. I’d vote for Graham if he pulled a Sarah Palin but instead of writing his speech notes on his hand began brandishing tropical drink umbrellas from his pocket with sweet political nothings written on them. 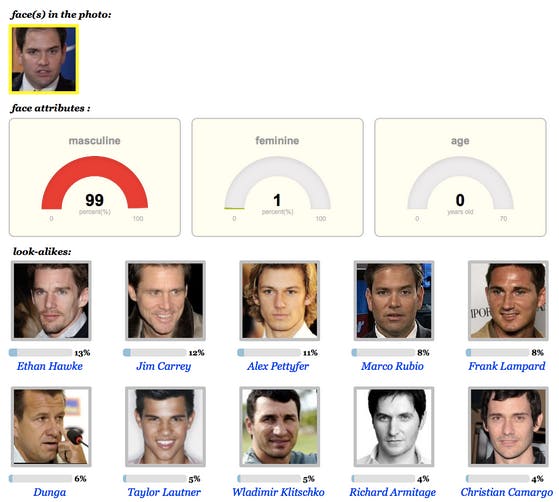 Marco Rubio has no age. Marco Rubio is timeless. Marco Rubio is a vampire? Is that still a viable demographic in today’s day and age, or did Christian Grey usurp that shit? I have so many questions, and Rubio can answer like none of them, because he’s actually one of the most boring candidates out there. But he looks like a caveman named Dunga, and to my 5-year-old sense of humor, that’s enough of a reason to vote for him. 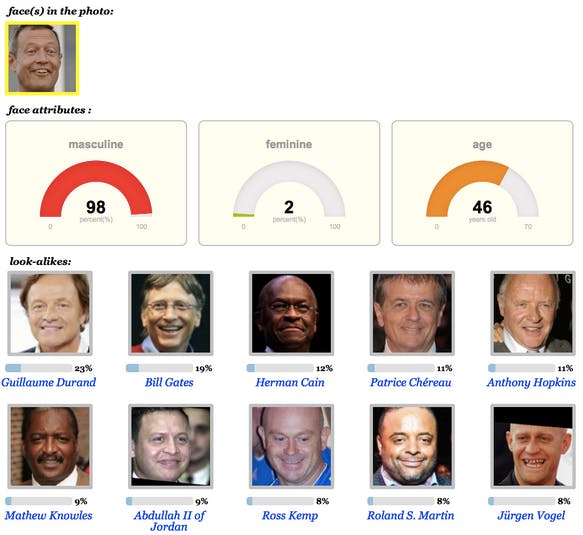 Martin O’Malley is to Herman Cain as… oh, who cares. I’m just glad we’ve got some Herman Cain action going down right here. What better comparison can be made than establishing that 12 percent of O’Malley is the 100 percent batshit insane, pervy, and altogether awful Cain? 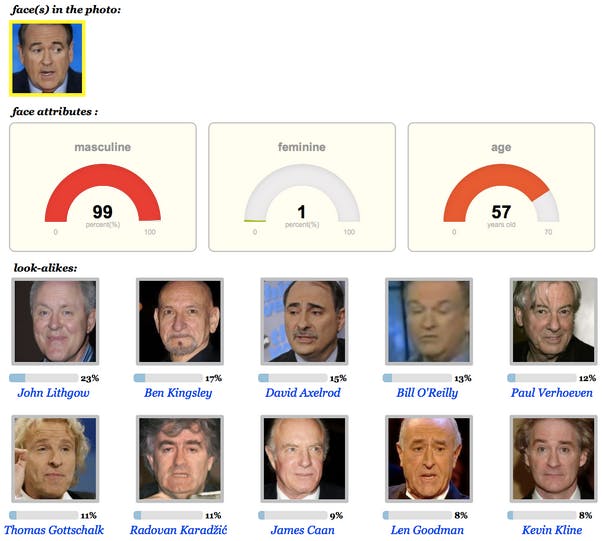 Mike Huckabee looks almost as unsure of himself as that blurred, face-smashed shot of Bill O’Reilly (again, not actually him). The upturned eyebrows and mouth agape don’t really befit the leader of the free world, but they do get you closer to looking like John Lithgow. 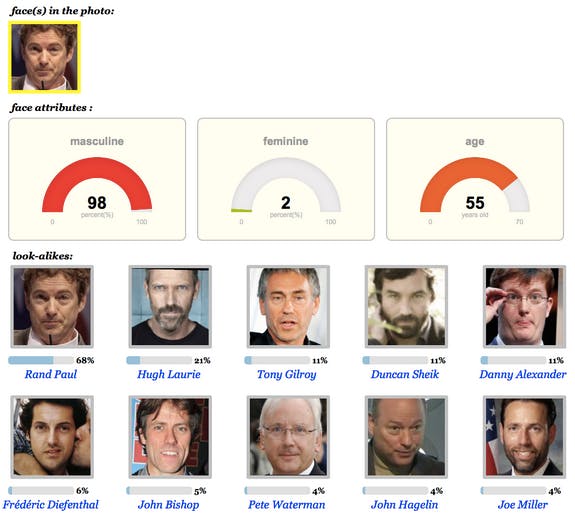 Rand Paul looks like he just swallowed a lemon. What a trooper and—truly—what a party trick. Guessing that’s his signature style, because PicTriev’s stock image of Paul is the exact same scurvy-averse shot. Likewise, Danny Alexander has some pretty intense lemon face going on, and his politics kind of align with Paul’s. This leads me to believe that pirates were libertarians, so, uh, vote for Paul to pillage the country. 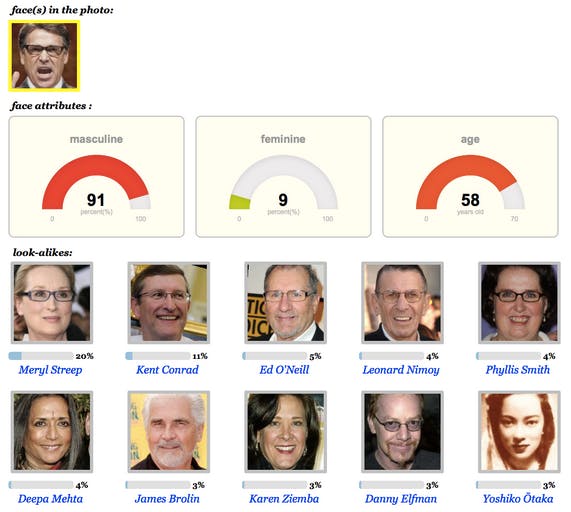 How can one be so masculine and yet so Meryl Streep? It just doesn’t add up. Angry Rick Perry’s lookalikes comprise the most “I sent these invites on bath salts” dinner party out there. Surely this means he can unite the country. 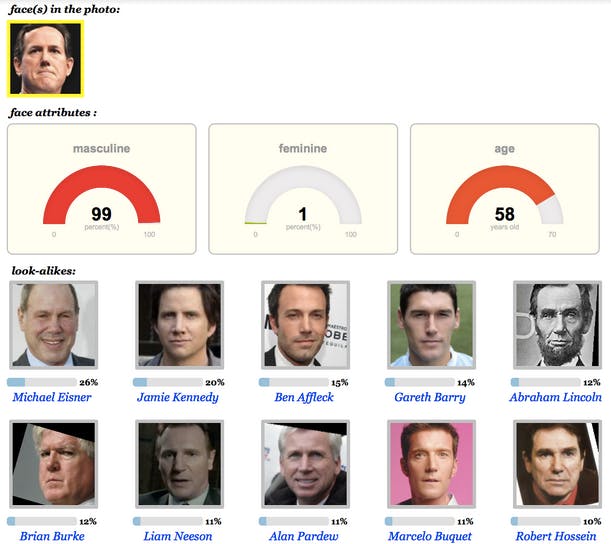 LOL, Rick Santorum and Honest Abe. Match made in heaven. Santorum can also be compared to a legendary Kennedy—the guy who starred in Malibu’s Most Wanted and got thrown in a dumpster filled with Wonder Bread, which is probably the same feeling as surviving the Iowa primary. I don’t need to remind y’all about the colloquial definition of Santorum, but, well, here we are. Good luck with that. 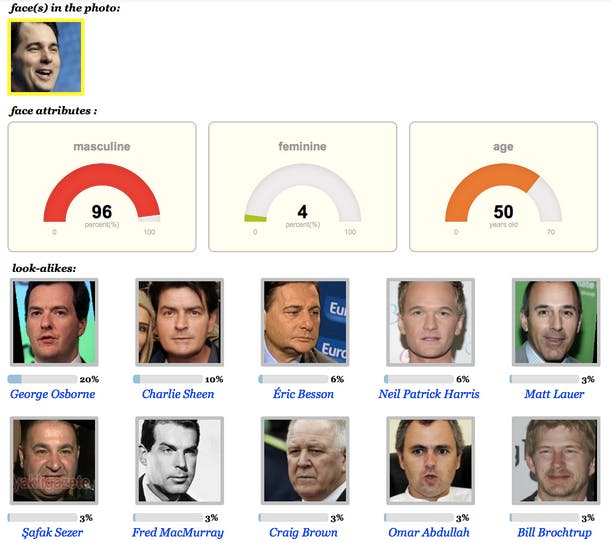 I’ve officially decided that Scott Walker and Charlie Sheen need to go on a bender together. Dude looks perma-high to begin with and could use a good face melt-off à la the drug called Charlie Sheen. Now that the country is more accepting of those running for president who aren’t born in the U.S, wouldn’t it be great if POTUS was taking advice from a bitchin’ rockstar from Mars? Or, hell, if the president was actually just Sheen? C’mon, Carlos Estevez. Make it happen. 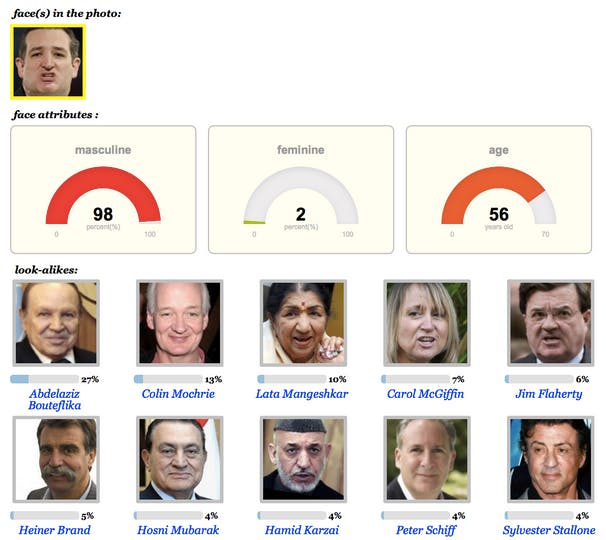 Ted Cruz seems like he’s going to vomit. Also, holy shit, Mubarak. And holy shittier, Colin Mochrie. That’s really how you spell his last name, isn’t it. Cruz has always struck me as a cross between a wax figure, Joe McCarthy, and a Darrell Hammond impression. This means he’s not only fit for office but all set for parody.

So, who the hell are you going to vote for? No one and nothing. Write in Deez Nuts. Burn your ballot with a bow drill set. I don’t know. There are 22 assholes running for president, and nothing matters anymore.