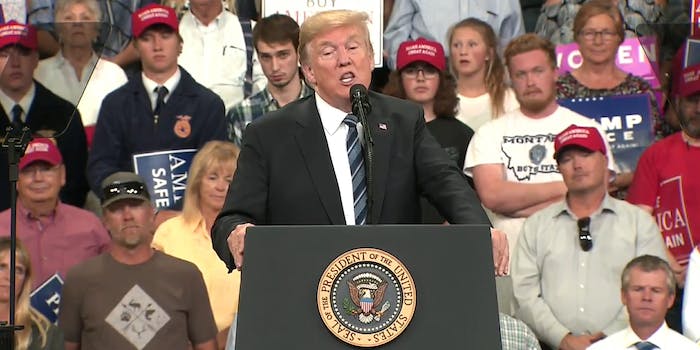 While President Donald Trump has spent his entire presidency railing against the use of anonymous sources, he’s stepped up his attacks in recent weeks, with the concurrent release of journalist Bob Woodward’s new book and the New York Times op-ed.

Does the so-called “Senior Administration Official” really exist, or is it just the Failing New York Times with another phony source? If the GUTLESS anonymous person does indeed exist, the Times must, for National Security purposes, turn him/her over to government at once!

Given all the time and thought he’s given them, you’d think he’d be able to pronounce them. But at a rally in Billings, Montana, Thursday night, he couldn’t. Twice Trump flubbed the word “anonymous.”

In the past, Trump has slurred and tripped over words, most notably in his speech about moving the U.S. embassy to Jerusalem, which prompted a conspiracy theory that he’d been either wearing dentures or having a stroke. Twitter had similar conspiracy theories on Thursday.

Did Trump have a stroke?

Did @realDonaldTrump have a mini stroke here or has he suffered one recently?? Joking aside his health needs to be looked at to see if he is fit to be the head of a country.#trump #Anonymous #AnonymousOpEd #LetsGetAfterIt #america #healthcheck https://t.co/z4xre1JxjA

The inability to pronounce anonymous was probably a mini-stroke.
After listening to this rambling, and you’re a Trump supporter, you should be jailed for stupidity. This is nuts. Such incompetence is sitting in the chair at the Oval Office. https://t.co/hFP8sJznwX

Listening to Trump try (twice) to say the word "anonymous" tonight reminded me of the speech when he almost swallowed his dentures. pic.twitter.com/eoV9VgoMpr https://t.co/k4SOEtjcWu

The man can afford much better dentures…. or is his brain just not connecting to his mouth. Dr. Strangelove…. https://t.co/uzpeLNillK

Don’t expect any official answer on this. Do expect several tweets wondering why.