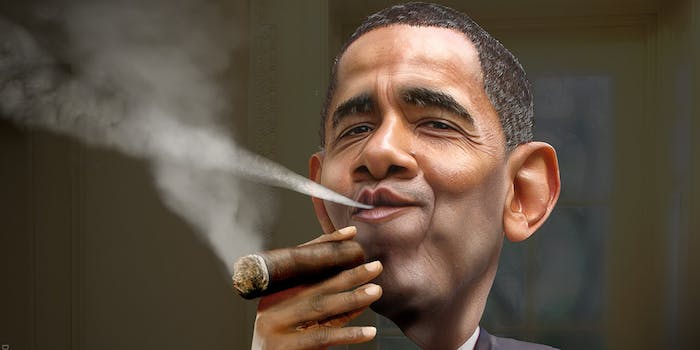 As medical marijuana makes its way through the Alabama legislature, the time is now.

Obama on medical marijuana: "we should follow the science as opposed to ideology on this issue" https://t.co/6iQcjrQfou

Perhaps more important than the fact that the Internet is abuzz over Obama’s interview with CNN, however, is the fact that the Internet may be able to pressure him to do the right thing on this issue, which is especially crucial as Alabama considers backing medical marijuana. So why, at a time when Internet campaigns have been so effective in raising awareness on matters from feminism to racism, has marijuana legalization remained such a slow burner?

In their own way, the three aforementioned tweets each capture the most important talking points the Internet should be discussing after Obama’s interview. As the Guardian astutely observed, Obama has expressed support for a policy (i.e., reducing constrictions around the use of medical marijuana) that has support from libertarian Republicans like Sen. Rand Paul (R-Ky.), as well as the traditional liberals in Obama’s own base.

Although the president hedged his bets by merely promising to “take a look at the details” of Paul’s Senate bill and only conceding that medical use of marijuana “may in fact be appropriate,” he emphasized that “the more we treat some of these issues related to drug abuse from a public health model and not just from an incarceration model, the better off we’re going to be.” Considering that critics of prevailing drug policy are highly critical of our harsh criminal punishments for drug offenders, this was an important stance for Obama to have taken, all the more notable because of its potential bipartisan support.

At the same time, when Obama talks about the need to “follow the science as opposed to ideology,” he is only half-right.

On the one hand, he is correct that science has proved there are numerous health benefits to marijuana use, and any society that claims to base its state policies on reason needs to take this knowledge into account when determining marijuana’s legal status. While his denunciation of “ideology” is no doubt partially directed at the often-hyperbolic rhetoric of the anti-drug crusaders, however, it could just as easily apply to the zeal of pro-legalization advocates.

When Obama talks about the need to “follow the science as opposed to ideology,” he is only half-right.

An important difference between the two sides must be noted: Even if scientific studies somehow demonstrated that regular marijuana use was a net negative for one’s health, there are plenty of unhealthy substances that the state doesn’t prohibit its citizens from using (e.g., cigarettes, alcohol, fast food). It is disingenuous to assert an equivalence, implicit or otherwise, between a pro-criminalization ideology that imposes subjective lifestyle preferences on others and the pro-legalization alternative, which champions individual liberty.

This brings us to Ventura’s claim that Obama “doesn’t have the balls to #legalize #marijuana.” Certainly it’s also important to appreciate that Obama has done more to liberalize America’s marijuana policies than any other president since cannabis prohibition went into effect in 1937. Not only did he decline to enforce federal drug laws in Colorado and Washington after those two states voted to legalize marijuana, but his Justice Department under Attorney General Eric Holder took bold measures to reduce and/or eliminate entirely tough mandatory prison terms for nonviolent drug offenders.

Then again, the president has traditionally approached the issue of marijuana legalization with great caution. His language in Sunday’s interview, for instance, was reminiscent of the position he articulated during his campaign for the United States Senate in 2004: “The war on drugs has been an utter failure. We need to rethink and decriminalize our marijuana laws. We need to rethink how we’re operating the drug war.”

This language may seem justified as politically expedient, but in light of Obama’s personal history, there is a level of hypocrisy to it. As an editor from the Washington Post discussed in 2012, Obama was himself quite the pothead in his own day, often spending time with a clique of friends informally dubbed “The Choom Gang.” Obama alluded to this himself in his 1995 memoir Dreams From My Father, where he wrote that when dealing with personal struggles, “Pot had helped, and booze; maybe a little blow when you could afford it.”

Obama has done more to liberalize America’s marijuana policies than any other president since cannabis prohibition went into effect in 1937.

It’s fair to assume that if Obama had been arrested for his use of these illicit substances back when he was a legally vulnerable teenager or twenty-something, he would likely not be sitting in the White House today (especially in light of the long-documented racial disparity in who gets incarcerated by anti-drug laws). While Obama presiding over the continued implementation of draconian anti-drug laws isn’t as flagrantly hypocritical as, say, President Warren Harding implementing prohibition while leaving the White House “awash in alcohol,” it’s still galling.

There was one question that voted on that ranked fairly high and that was whether legalizing marijuana would improve the economy and job creation. And I don’t know what this says about the online audience, but … this was a popular question. We want to make sure it’s answered. The answer is no, I don’t think that’s a good strategy to grow our economy. All right.

I suspect the president’s flippant attitude toward the perspective of Internet users reveals a great deal about why this issue hasn’t gained the traction of other causes that are popular online. Because of the cultural stigma attached to marijuana use, it is easy to take attention away from the serious civil liberty issues at play by its continued criminalization. Even though millions of Americans smoke pot and millions more believe it should be legalized, there remains the embedded assumption that this is simply not as “serious” an issue as many of the others currently being bandied about in our collective political discourse.

What’s more, despite the historic campaigns to legalize it in Colorado and Washington, there has yet to be a groundswell of national activism to end this prohibition on the scale of other recent civil liberties-based campaigns (e.g., those involving LGBT rights).

What makes this particularly tragic is that, if legalization advocates used the resources available online more effectively, they could pressure both Obama and future presidents into making real change. It is reminiscent of Franklin Roosevelt’s legendary response to labor leaders who attempted to persuade him to back a bill important to their cause: “I agree with you. I want to do it. Now make me do it.”

Can the Internet rise to that challenge?