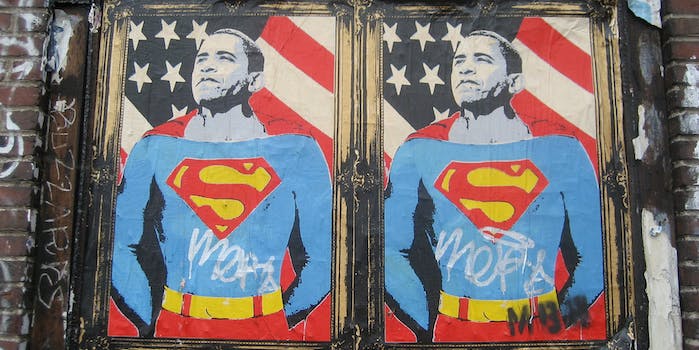 As Obama fights for net neutrality, it's time to celebrate his biggest accomplishments.

Supporters of President Obama can rest easy: His legacy as one of America’s greatest presidents remains intact, even if the tide of public and Internet sentiments has turned. (His approval rating stands at a paltry 39 percent.) As the president works to fight for net neutrality, it’s time to celebrate his biggest accomplishments.

Despite the worst midterm election losses suffered by the Democratic Party while controlling the White House since 1946, Obama has more than delivered on the promise of change offered in his 2008 presidential campaign—even if the Supreme Court undercuts the president’s signature healthcare law next year. What’s Obama done for you?

The Affordable Care Act may have been one of the most controversial measures in Obama’s administration, but its long-term impact will be a big net positive. It has already resulted in 7 to 10 million Americans acquiring health insurance, averted an imminent defunding of Medicare by stabilizing its trust fund until 2030, and put an end to insurance company practices like denying coverage to patients with preexisting conditions. Given that 30 million people are expected to receive insurance (either privately or through Medicaid) by 2022, it stands to reason that its benefits will endure long after extensive right-wing opposition and website glitches have faded into historical memory.

A word on that right-wing opposition: Conservatives may have vowed to repeal the bill, but their efforts may be futile. Because Congress lacks the votes to override a presidential veto, the most they can do is tweak the law. Similarly, although the Supreme Court could seize on the linguistic technicality brought to light in King v. Burwell to take subsidies away from 4.6 million of the Americans who have already received them, this would only weaken the bill, not destroy it altogether (in fact, given the outcry that will be raised by those impacted by the ruling, it could pressure recalcitrant states into accepting the exchanges).

2) Leading America through the Great Recession

It is easy to forget how close America was to entering a second Great Depression when Obama took office in January 2009. Between the Wall Street meltdown of September 2008 and the period when Obama’s stimulus bill (the American Recovery and Reinvestment Act) began to take effect in May 2009, the unemployment rate increased an average of 0.4 percent per month. There is a good reason why the consensus among leading American economists is that the stimulus worked; after taking office with an unemployment rate of 7.8 percent (reaching 10.1 percent in October 2009), unemployment has dropped to below six percent for the first time since 2008.

There are plenty of other impressive statistics supplementing this one: 10 million new jobs have been created since Obama took office; America is currently in the midst of its longest period of private sector job creation (56 months) and economic expansion (65 months); and the stock market is posting record earnings. There was a lot of truth in David Letterman’s quip last week, “Take a look at this: gas under $3 a gallon—under $3 a gallon. Unemployment under 6 percent, whoever thought? Stock market breaking records every day. No wonder the guy is so unpopular.”

Obama has fulfilled many of the central foreign policy promises of his 2008 campaign. Where Bush failed to capture Osama bin Laden after more than seven years in office, Obama fulfilled his debate pledge to kill the 9/11 mastermind, presiding over the risky military operation that was later praised by Secretary of Defense Robert Gates for its courageousness. Similarly, after promising to significantly de-escalate America’s military presence in Afghanistan and Iraq, Obama did precisely that, even holding to the latter with relatively modest increases in military intervention despite calls to do more thanks to the ISIS crisis.

In the midst of all this, Obama charted a new course for American foreign policy, one perhaps best summed up by his landmark “New Beginning” speech in Cairo. When the best that Republicans can do to attack the president’s foreign policy is trump up charges like the so-called “Benghazi scandal” (with a Republican committee being forced to exonerate him on the allegations pertaining to his conduct), it’s clear that he has much to be proud of from a geopolitical standpoint.

Much has been written about the unique demographics that resulted in Obama’s historic victories in 2008 and 2012. By maintaining widespread and deep support among racial minorities, women, lower income Americans, the well-educated, and youth, Obama was both elected and reelected by comfortable margins in the popular vote and Electoral College. Considering that Democrats also made gains in congressional and gubernatorial elections in those years, it stands to reason that this coalition—though tied to Obama’s personal political brand—had long enough coattails to benefit the Democratic Party as a whole.

Incidentally, if there is any lesson Democrats can learn from the 2014 midterm elections (as well as the 2010 midterms), it is that they need to embrace leaders who can unite these groups behind the party. In 2010 and 2014, many Democrats avoided associating with Obama out of fear that doing so would hurt them politically—even though Obama’s lowest approval rating since taking office is higher than that of his eight predecessors. In lieu of either a strong leadership figure or any other coherent rallying cry, voter turnout in 2014 reached a low not seen since 1942. One must recall the axiom that low turnout helps Republicans and, inversely, high turnout helps Democrats—especially if they can reassemble the Obama coalition.

Not nearly enough has been said of Obama’s brave tackling of many of some of the most important human rights issues facing early 21st century America. As one example, his gun control efforts occurred after the Sandy Hook Elementary School shooting prompted his administration to abandon the mantra of its predecessors (who always insisted that “now is not the time” after a school shooting occurred) and instead make a push for meaningful change with a bill including mandatory background checks and an assault-weapons ban. While this failed, the risk he took by becoming the first sitting president to openly support the right of gay couples to marry (right as his reelection campaign was about to begin) seems to have paid off, with state after state legalizing same-sex marriage since his announcement (whether he influenced this or was simply ahead of the curve is a matter of debate).

This list doesn’t end with gun control and marriage equality. There was Obama’s stalwart support for the contraception mandate in the Affordable Care Act (again, a measure that won him harsh criticism of the right but involved taking a firm stance on women’s rights over their own bodies), his insertion of income inequality as a into political debate after it had been taboo for a very long time, or even his recent call for the FCC to do more to protect Internet neutrality. These topics may seem myriad, but all of them involved an embrace of progressive principles that would have seemed impossible from a sitting president in the post-Reagan Revolution era. By changing the debate, Obama has laid the foundation for future policy achievements.

As America’s first black president—and one who had been elected during an unusually energetic political campaign—Obama entered the Oval Office steeped in enormous expectations. Now that his tenure is winding down, it’s important to take a step back and appreciate just how much he has actually accomplished.

Photo via SliceofNYC/Flickr (CC BY 2.0)