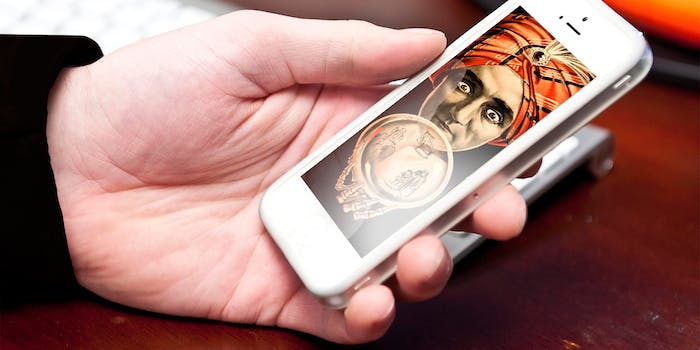 Should we let apps predict our future?

Apps like Cover, Aviate, or Google Now promise to organize your day on your smartphone, but there's a cost to that convenience.

The complaint that technology is making us lazy is for cranks and curmudgeons—the boomers staring listlessly at their typewritten letters and wishing for the good ol’ days.

So it’s with some trepidation that I begin to rant about “predictive” software. These are apps and programs that study your interactions, behaviors, and locations to better bring you their services. Apps like Cover, Aviate, and Google Now promise to organize your day on your smartphone by providing you certain apps, news, and updates at certain times or in certain places (using geographic information gathered from Wi-Fi fields).

But what’s the hidden cost of that convenience?

Indeed, the interface’s of either the Playstation 4 or XBox One are built around this very concept, using cameras to identify different players and providing what they use. Netflix has similarly moved to such customization, offering “Taste Profiles” to give recommendations for new films or TV shows (which always conspicuously offer Netflix original programming).

Of course, these are merely scratching the surface of predictive software. Back in February, the Guardian gained access to a video from U.S. defense contractor Raytheon showing a program called Riot, which can not only bring up the geographic location of any smartphone user but also predict by probability that person’s future behavior.

Predictive software might sound scary and Orwellian, but we’ve been using it for decades with mixed results. Microsoft’s old Office Assistant—better known as “Clippy”—used probability to try and offer tips (such as the word “dear” prompting a letter-writing tutorial). Google Suggest, responsible for a thousand lazy blog posts, uses Google’s massive store of search terms to try and guess which one you’ll be entering (a feature Google fully integrated with Google Instant).

Tons of software has been built upon the idea that an app can be better at predicting the future than you can for yourself. So what makes this new breed so different?

First, it’s putting even more distance between the users and the technology they enjoy. Digital technology is roughly following the same trendline as the automobile, which stripped itself of the fuel valve, spark lever, gas lever, and choke (and soon the driver himself). So it’s not entirely shocking that technology is attempting to operate itself for us in an age where you can fix a car’s suspension problem with a software update.

Why is this bad? Steve Jobs is often heralded for simplifying the user experience, culminating in the design of the iPhone and iPad. But in doing so, he (and every copycat) has put digital consumers in the same boat as most drivers are today. Ask most teenagers clamoring for a Corvette how an internal combustion engine works (let alone how the whole vehicle works) and you’ll mostly get blank stares. Chances are they can’t explain their iPhone either. For that matter, I’d venture many don’t know what “Ctrl+Alt+Del” means. The more deceptively simple a technology becomes, the more disconnected we’ll be when we want to do something these predictive apps won’t let us do or already does for us.

More importantly, predictive apps could further deplete our drive to innovate. The United States is finding itself scrubbing the floor for engineers and programmers. When kids grow up seeing less and less how computers work, the cost of entry only increases.

By contrast, when people are encouraged or forced to fix their own freeze or locate their own files or put their finger against a screen one extra time, it makes the mysterious figures and circuits that make up our digital age that much less intimidating to explore, repair, and hack.

Predictive apps rely on a typified image of American life: You wake up, you go to work, you come home. They are an admission that smartphones are not only with us throughout that three-step process but starting it by waking us up.

These tools have become as integral to our ordinary lives of work and leisure as the automobile. But if they’re going to predict our behavior for the better, they’re going to need us to pry open the hood and see what’s inside.