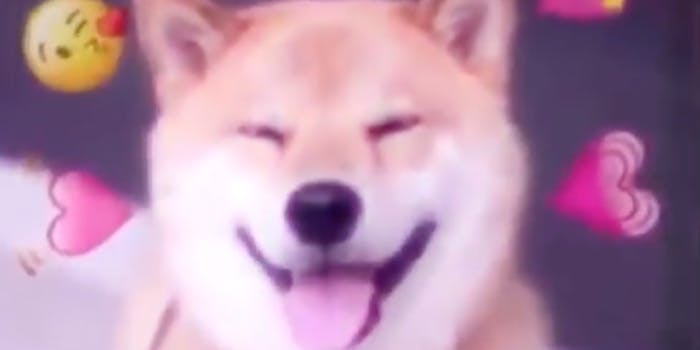 “You so … f*ckin’ … precious … when you … smile,” goes the opening line of Bazzi’s “Mine,” a minor R&B hit from 2017. The song didn’t immediately set the charts on fire, but that first line has become one of the biggest, funniest memes on Snapchat. Now it’s starting to show up on YouTube and Twitter, too. But why was this particular, unremarkable track chosen for meme greatness?

It started with Snapchat’s “Be Mine” lens, which adds heart-shaped eyes and little floating hearts to your snaps. Someone, possibly a YouTuber called Airayami, noticed that Be Mine paired extremely well with “Mine.” This seems to be the video that started the trend of applying the song and the heart filter to a bunch of meme-y images.

Here’s a compilation of some of the best examples, including one starring Doge, the classic Shiba Inu dog meme:

Juxtaposing a sweet sentiment and some hearts with random meme garbage is a surefire comedy formula that really resonates on the 2018 internet. The potent combo of thumping heart eyes and “precious when you smile” isn’t limited to Snapchat and YouTube clips, either. It translates surprisingly well to Twitter:

It’s hard to measure the strength of a meme on Snapchat, where posts automatically expire and are mostly sent to groups of friends. But if the “precious when you smile” memes on other platforms are just the tip of the iceberg, the chunk of the meme that’s hiding on Snapchat must be huge.

One indication of its popularity comes from the Billboard charts for the week of Feb. 3. Bazzi’s “Mine” made a surprise push into Hot 100 several months after it was first released. “‘Mine’ arrives with 11.4 million U.S. streams (up 88 percent) in the week ending Jan. 25, according to Nielsen Music, as it also debuts at No. 46 on the Streaming Songs chart. It also sold 9,000 downloads (up 98 percent),” Billboard reported. “The song’s sudden spike in popularity is due, in part, to an internet meme.”

A YouTube video for “Mine,” posted to Bazzi’s channel in October, now has more than 5 million views. A new music video of the song was posted on Wednesday.

“Precious when you smile” also speaks to the meme-making potential of Snapchat lenses. More elaborate than Snapchat’s built-in photo filters, lenses combine visual effects and audio. Since December 2017, users have been able to create custom lenses, which makes something like the “precious when you smile” meme incredibly simple to pull off. Reddit’s r/snaplenses community has several variations on the Be Mine lens, with the Bazzi song included.

This might be the first big, cross-platform meme to come from a custom Snapchat lens, but it certainly won’t be the last.