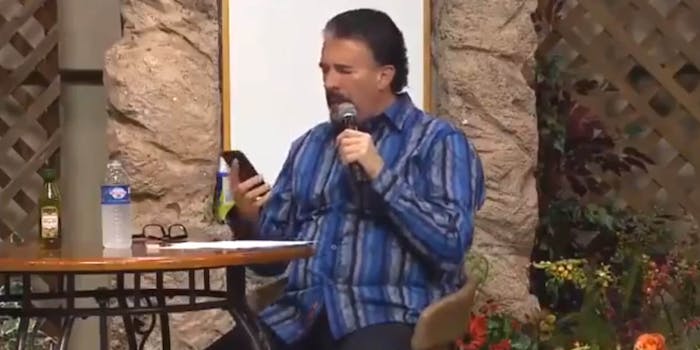 What exactly is happening here?

Today in weird internet news, Twitter user @nuns_on_film shared a video featuring what seems to be a Pentecostal preacher speaking in tongues while checking his phone. Making the scene even more confusing he appears to be sitting at a restaurant table, with a waiter’s tattooed arms coming into view to wipe and bus the table while the preacher speaks a mixture of English and nonsense into his microphone.

This video of a preacher checking his phone while speaking in tongues is my favorite video on the internet right now pic.twitter.com/I9iqZpCQmF

Thickening the plot even further is the fact that, according to a lot of Twitter users with a background in Pentecostal and charismatic churches, this isn’t actually what speaking in tongues sounds like. Speaking in tongues, known as glossolalia, consists of words that are either from no known language or a language unknown to the speaker. While some of what the preacher, identified as televangelist and Pentecostal minister Perry Stone, is saying appears to be from an unknown language, the fact that most of it is in English has even led some Twitter users like @TellUsWhy2017 to accuse him of faking it:

Except this isn’t how it sounds when people are truly speaking in tongues. He’s exhorting (badly) but he’s also speaking English. Praying in tongues, the language of the Holy Spirit, is only understood & translated by the person speaking it. It isn’t in English. So he’s faking.

I grew up Catholic and then my parents converted to Pentecostal Christian and this is the most unmotivated speaking-in -tongues I've ever seen. I respect the non-hustle.

I was never near a holy roller church and I know this is not speaking in tongues. Sound more like my uncle Fred when he was constipated and finally got some relief.

Prompting some real cynicism about the charismatic churches and religion in general in the responses.

how to explain the relationship between religion and modernity in one video https://t.co/v5XqzsSD9w

Once you're down with the talking snake, you'll believe most anything.

Total misunderstanding of the gospels, when the apostles were given the power to speak in tongues, it was the ability to speak in all languages not muttering gibberish, it would be funny if not for the amount of money these preachers take from trusting followers.. shameful.

The definition of phoning it in to God

However, given that Stone appears to be in a restaurant, it seems unlikely that he’s delivering a sermon.

Sir, this is an Olive Garden.

Begging the question, what is he actually doing? Twitter had some very uncharitable suggestions, including @GraterTrent’s cheeky  zinger: “I’m pretty sure he was reading that he was about to lose tax exempt status…”

This has to be a joke. Right?

MSG: Honey, can you pick up eggs on your way home from having your televised seizure?! Tx. Kisses

It turns out the video was originally uploaded to Stone’s own church YouTube account, and while it’s since been taken down, an article by Hemant Mehta on Patheos claims that it’s a recording of a prayer meeting being led by Stone. Why this appears to be taking place in a restaurant and why Stone continues scrolling through his phone throughout remain unanswered, however. The Daily Dot has reached out to Mr. Stone and his team for an explanation.

They don't know he's also auctioning off the poor souls of his parishioners bidding for salvation.

Jesus sent him a text?