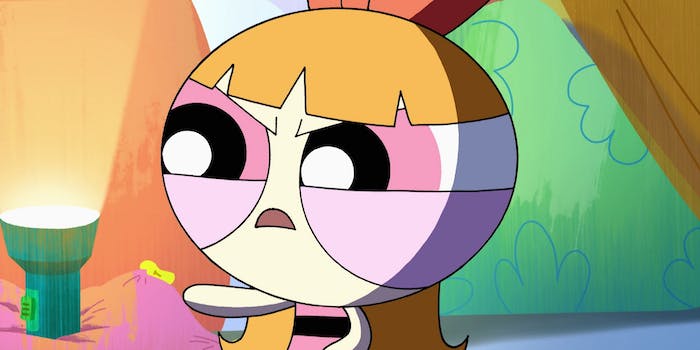 ‘Powerpuff Girls’ reboot’s cringeworthy, leaked script featured them as grown-up, live-action heroes walking in on each other having sex

The leaked script is a raunchy drama full of edgy buzzwords.

The CW is going back to the drawing board with its live-action Powerpuff Girls reboot, after the pilot episode was deemed “a miss.” The basic concept (an edgy drama starring the Powerpuff Girls as disillusioned millennials) was already unpopular among people who loved the cartoon as kids. And things only got worse when the pilot script allegedly leaked online.

The script emerged on a TV forum, spreading on Twitter this Tuesday. While it hasn’t officially been confirmed as the real thing, the most viral screencaps from a specific Twitter user were deleted due to a copyright notice, lending credence to the idea that it’s real. However there are still plenty of screencaps elsewhere, and they’re pretty cringeworthy.

There’s a real “How do you do, fellow kids?” vibe here, with Bubbles, Buttercup, and Blossom talking about being “triggered,” namedropping social media brands like LinkedIn and Facebook (That’s what you pick? In 2021?) and walking in on each other having sex.

Basically, it feels like a bad parody of an edgy, sexualized reboot. Bubbles is a wannabe celebrity influencer who winds up in rehab. The girls casually threaten to leak each other’s nudes. And the basic premise relies on the idea that their childhood was totally miserable, abandoning the fun-loving superhero vibes of the original cartoon. (Which was, of course, for 8-year-olds.)

Co-created by TV writer/producer Heather Regnier (Sleepy Hollow) and Oscar-winning screenwriter Diablo Cody (Juno, Jennifer’s Body), the show’s original pilot was filmed earlier this year. It stars Chloe Bennett, Dove Cameron, and Yana Perrault in the lead roles, and the CW is planning to try again with a revamped script.

If these leaks really are genuine, then we can see why the CW made that choice. While you can’t judge a show by its script alone, this over-the-top edginess is a far cry from the enjoyable absurdity of Riverdale, which rebooted Archie‘s wholesome vibes into a horny-yet-absurd soap opera.

According to the CW’s chairman Mark Pedowitz, the Powerpuff pilot “may have felt a little too campy and not rooted in reality.” He avoided confirming or denying that the script leaks were real. Although if the viral quotes were fake, wouldn’t he want to deny it as soon as possible?

Perhaps more tellingly, Pedowitz also said, “This is a powerful property, it engaged a lot of interest.” Meaning that the relentless backlash against the Powerpuff Girls reboot is just proof that people are invested in the show. This kind of reboot is all about brand recognition, and the CW is determined to capitalize on the beloved Powerpuff Girls brand by, uh… making it more “realistic,” apparently? Let’s see how that one pans out.