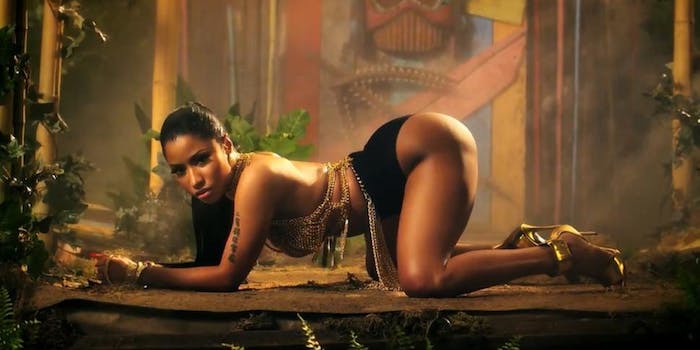 On the Internet, the lines of pornography are blurring.

music videos lately are more like masturbate-material. lol you know, Nicki with Anaconda, J-L and Iggy with Booty 😂

Shakira and Rihanna’s video for “Can’t Remember to Forget You” had a similar effect on the Internet. Although some critics shamed the sexy duo for catering to a heterosexual male gaze through a display of “faux lesbianism,” plenty of queer women were not complaining. Trish Bendix of After Ellen reacted to the video with a breathless declaration of “Oh my!” and Tumblr promptly broke down the entire video into its constituent GIFs.

Almost any major music video made in the last year might best be watched between the sheets. Jennifer Lopez and Iggy Azalea’s new video “Booty” made a big splash because of the way in which these two stars gyrate their butts against each other. Miley Cyrus’ “Adore You” showcases the pop star rolling around in bed while repeatedly slipping her hands down her panties. The video for “Partition” includes some particularly stirring dance moves from a near-naked Queen Bey.

On the male side of things, Kanye West‘s “Bound 2″ shows the rapper having simulated sex with Kim Kardashian as he drives a motorcycle through the sky. And, of course, Robin Thicke’s controversial “Blurred Lines” video features topless models in nude thongs prancing around male artists. This list could go on and on.