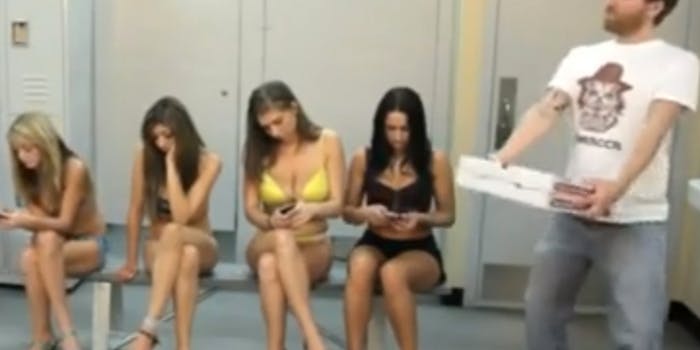 This 30-second, NSFW clip has been seen more than 30,000 times, despite clearly violating YouTube's community guidelines.

Its existence is noteworthy because YouTube purports to maintain a strict set of Community Guidelines that prohibit “pornography or sexually explicit content.”

In April, the site went so far as to temporarily block a video that found former California mayoral candidate Fred Karger kissing another man.

“Most nudity is not allowed, particularly if it is in a sexual content,” the site’s guidelines explain. “Generally if a video is intended to be sexually provocative, it is less likely to be acceptable for YouTube. There are exceptions for some educational, documentary, scientific, and artistic content, but only if that is the sole purpose of the video and it is not gratuitously graphic.”

There’s also a guy who’s holding a pizza box over his pelvis, and we all know what that implies.

How long will this video stay up? The answer is anyone’s guess. YouTube did not respond to the Daily Dot’s request for comment.

Update: Shortly after this story published, YouTube removed the video. The headline of this story has been changed accordingly.