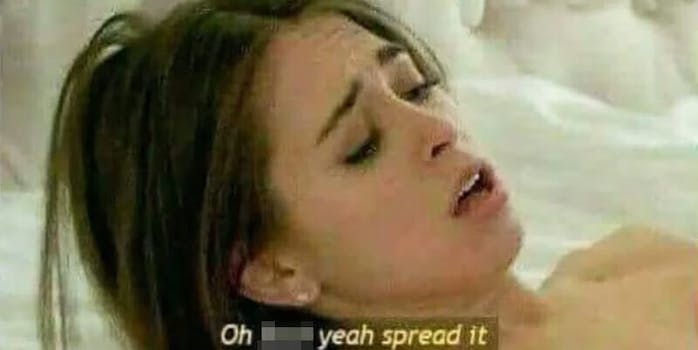 This one is not for the faint of heart.

This time, the originating material comes from adult film star Riley Reid for BLACKED.com, in the subtly titled Petite Riley Reid Tries Huge Black Cock in Her Ass. At some point in the video, Reid says the line, “oh fuck yeah, spread it.”

The screenshot first showed up on Dank Memes earlier this month with the caption, “When someone ask me if they should spread the idea of Communism.”

Things i wanna spread in 2018 from dankmemes

From there the meme made its way around Reddit for a bit before someone on Twitter appropriated it to make an ironically wholesome statement on spreading positivity—and then it really took off from there.

when i see someone displaying positivity pic.twitter.com/bcuGaxkbSE

The meme even earned itself its own small subreddit, OhFuckYeahSpreddit, where others shared a few variations:

Don’t forget to wash your hands from OhFuckYeahSpreddit

Then back over at Dank Memes, the meme evolved (or, devolved, depending on your point of view) into people blacking out some of the words in the caption to create something entirely new.

It really do be like that tho from dankmemes

In the general lifespan of a meme, it’s probably only a matter of time at this point before it inevitably gets mashed up with another meme such as “slaps roof of car” or what have you.

“This baby can fit so many…” Well, you probably get the idea.