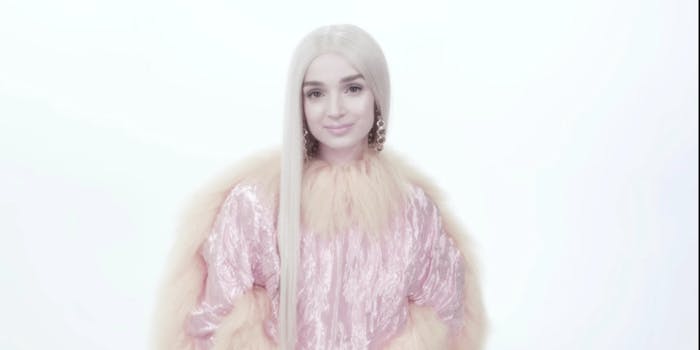 Poppy responds to lawsuit, says Mars Argo is working with her abuser

The Poppy lawsuit just got a lot more complicated.

Singer and YouTube star Poppy was sued in April by another YouTuber, Mars Argo, who claimed Poppy had gotten famous by stealing her style and ideas. Poppy finally responded this week with a tweet accusing Mars of using legal action to make a “desperate grab for fame.”

Poppy is a mysterious, childlike blonde pop star whose videos comment on how social media and entertainment affect our lives. She’s played by singer Moriah Pereira, and co-created by producer Titanic Sinclair (real name Corey Mixter). Titanic previously dated Mars Argo, whose real name is Brittany Sheets. They made videos together that Mars now alleges were the basis for the Poppy project. In her lawsuit, Mars also accused Titanic of domestic abuse and stalking.

In her statement, Poppy claimed there’s more to the story than Mars is letting on.

In a bizarre reversal of Mars’ story, Poppy claims that Titanic was never an abuser—but she was abused by a different man. Poppy says Mars is now in a relationship with the man who “took advantage” of Poppy when she was younger. According to Poppy, the two are collaborating to attack Poppy and Titanic for “personal gain.”

She calls Mars’ accusations “psychological manipulation” and “preposterous projections of her own actions.”

Poppy didn’t name her alleged abuser in her statement, but she later posted her August 2015 request for a domestic violence restraining order against a Joshua Michael Moran, and an order for protection against Moran that Titanic filed the same day.

The lawsuit, with Poppy and Mars’s conflicting allegations, has also made its way into the Poppy project in an extremely Poppy way. Poppy’s latest video is called “Drama.”